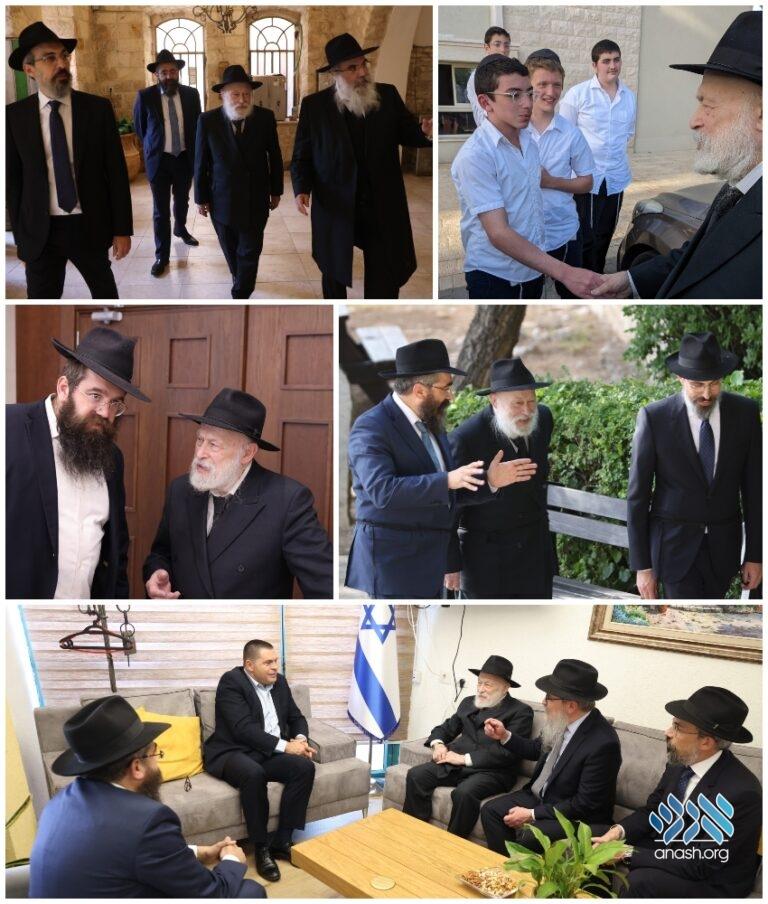 During a weeklong trip to Eretz Yisroel, Chairman of Merkos Rabbi Yehuda Krinsky visited the Chabad institutions in Tzfas and met with Mayor Shuki Ohana to plan future expansion. He also addressed groups of students.

The Rebbe’s secretary and Chairman of Merkos L’Inyonei Chinuch, Machne Israel and Kehot, Rabbi Yehuda Krinsky, paid an impromptu visit to the holy city of Tzfas. He was accompanied by his son-in-law, Rabbi Yosef B. Friedman, his son, Rabbi Shmaya Krinsky, and the Shliach in Safed, Rabbi Chaim Kaplan.

The visit began with a meeting with Tzfas Mayor Shuki Ohana, where they discussed the growth of Chabad institutions in Tzfas over the years and plans for future expansion. Pulling out his phone, the mayor excitedly showed the visitors a video he took of the recent Chidon HaTanach in Yerushalayim at which the competition opened with a video presentation on the Rebbe’s leadership.

Rabbi Krinsky recalled the Rebbe’s special interest in Tzfas and the rebuilding of the community that began when he sent his personal shliach, the late Rabbi Leibel Kaplan, to plan and lead the revival of Jewish Tzfas.

From there, the delegation headed to the Machon Alta and Seminary Chaya Mushka campus, where the director, Rabbi Yosef Rosenfeld led a tour of the ancient, iconic building, in which the Frierdike Rebbe stayed during his visit to Tzfas in 1939.

From there, the delegation ascended to the summit of the city of Tzfas, to the campus of Yeshivas Tzeirei Hashluchim, founded by Rabbi Leibel Kaplan at the initiative of the Merkos L’inyonei Chinuch. There they were greeted by Rosh Yeshiva Rabbi Shneur Zalman Kaplan.

Rabbi Krinsky addressed the students and reminisced about the care and guidance he merited to receive from the Rebbe when he was a young boy their age and encouraged them to increase their diligence in Torah.

Rabbi Krinsky met with Rabbi Shmuel Misholovin and other staff members of the newly established Yeshiva Ohel Menachem Mendel, and before leaving he spoke with the shluchim students at the yeshiva, as he was also one of the group of shluchim students sent by the Rebbe to the Holy Land in 1956.

The whirlwind visit concluded with a quick tour of Otzar HaStam which has become an international center for high-quality Torah scrolls, tefillin and mezuzahs. Rabbi Krinsky his admiration for the magnificent building and the many activities that take place in it, both in the high-tech visitors’ center and in the standards of excellence which has become the hallmark of the products of Otzar HaStam.

Due to the tight schedule and the late hour, the visit to Tzfas could not include more of the many Chabad institutions flourishing in Tzfas. Rabbis Krinsky and Friedman thanked Rabbi Kaplan for the exhilarating tour, wished him continued success in his Shlichus in the holy city, and made their way back to Yerushalayim.