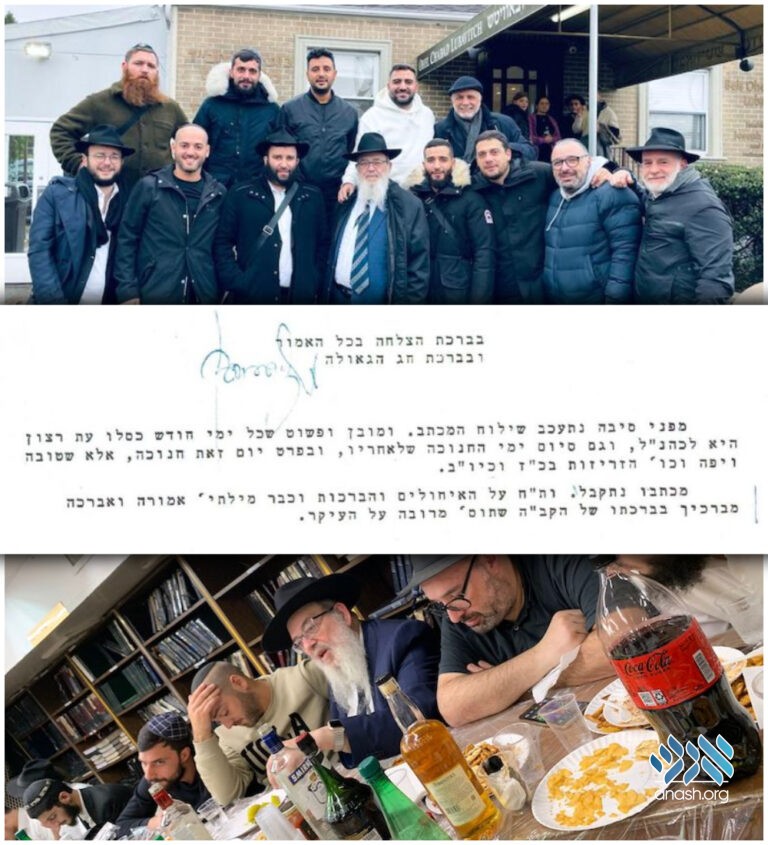 A few weeks ago, Rabbi Chaim Mellul, shliach to Créteil in Paris, France, received a letter from the Rebbe written 43 years ago. His community celebrated with a week-long trip to Crown Heights.

Three weeks ago, Rabbi Chaim Mellul, shliach to Créteil in Paris, France received a letter from the Rebbe which was addressed to him in 1979, 43 years ago, and which had never been mailed.

Rabbi Sholom Mendel Simpson, a”h, was one of the Rebbe’s secretaries who would type the Rebbe’s correspondence based on the dictation and notes the Rebbe provided to him. Many of these letters were published in the tens of volumes of Igros Kodesh.

A few weeks ago, Rabbi Simpson’s son discovered a letter addressed to Rabbi Chaim Mellul which had never been delivered. The letter was dated 15 Kislev 5739, 43 years ago.

On Monday morning of the Kinus Hashluchim, Rabbi Mellul met up with Rabbi Simpson’s son who handed him the letter from the Rebbe minutes before rushing to catch a flight out of Crown Heights.

In this letter, the Rebbe explains the importance of Yud Kislev and Yud Tes Kislev.

Then at the end of the letter, after signing, the Rebbe wrote “mipnei siba, nisakev shilu’ach hamichtav,” – “for a reason, there was a delay in sending the letter,” and the Rebbe specified that all the teachings mentioned in the letter applies to the entire month of Kislev and the concluding days of Chanukah which follow it, particularly “Zos Chanukah”.

Where the typed letter had read “michtavoi niskabel” – “I have received his letter”, the Rebbe added by hand a “yud” in “michtavoi” and a “vav” in “niskabel” to specify “michatvav niskablu” “his letters (in plural) have been received”.

Rabbi Mellul was obviously ecstatic to receive this special, unexpected letter. The following Shabbos, back in Créteil, Rabbi Mellul learned the letter with the members of his Chabad House. His enthusiasm was contagious and the entire community felt uplifted and blessed by this incredible gift of the Rebbe’s letter addressed to their Shliach and finally delivered after 43 years.

A few days later, community members decided to organize a week-long trip to the Rebbe for Yud Kislev, in appreciation of this special letter. A trip had not been possible until recently, when restrictions on flights to the United States were lifted.

The group visited the Ohel and 770, strengthened by the knowledge that the Rebbe continues to care for each one of them, addressing them individually and guiding them in their lives.