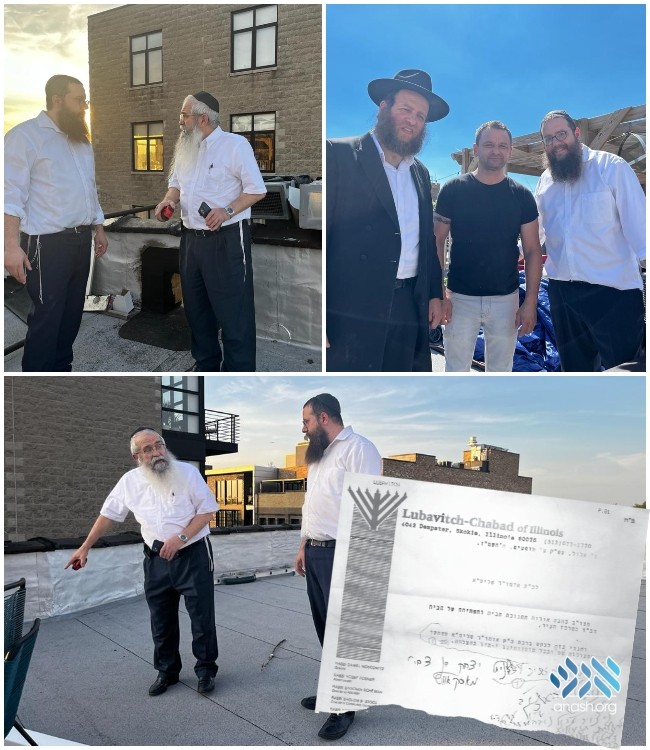 35 Years after the rebbe encouraged increasing in Torah and mitzvos in honor of the Hakel year, Chicago’s downtown district is building its first Mikvah.

At the conclusion of the year 5747, the Rebbe encouraged everyone to utilize the coming Hakhel year to increase their commitment to making the world filled with Torah and mitzvos.

After hearing the Rebbe’s words, a young Rabbi Daniel Moscowitz, returned to his hometown with his wife, Esther Rochel and decided to take the inspiration from the Rebbes words to begin activities and ultimately open a new Chabad House in the heart of Chicago’s Loop district, the epicenter of Downtown Chicago.

In conjunction with this momentous occasion, Rabbi Moscowitz sent a letter to the Rebbe announcing this new mosod and asking for a brocha for its success.

the response from the Rebbe to Rabbi Daniel Moscowitz read:

“It was received, with thanks, I will mention this at the Ohel. [Mazkirus should] send the attached article back to him [Rabbi Moscowitz]. Perhaps it would be worthwhile to republish a synopsis of this [article] (with some additions?) in order to have more success in the activities of the month of Elul, and of [the upcoming] Year of Hakhel.”

This year, 5782, 35 years after the Rebbe’s talk, Elul is yet again momentous month for the Chicago area, especially before the Hakel year. Rabbi Yosef and Sara Moscowitz, shluchim to the Bucktown neighborhood in Downtown Chicago, are opening the first mikvah in the area.

Mei Daniel, named in memory of Rabbi Daniel Moscowitz who tragically passed away in 2014, enriches the impact Chabad is making in the downtown area. Work has almost finished on the new mikvah which will serve the 8 mosdos dedicated to the downtown area.

“It’s a game-changer for the Downtown Chabad Houses,” explained Mrs. Sara Moscowitz with a twinkle in her eye. “The Rebbe’s taharas hamishpacha campaign is one of the most delicate jobs shluchos have, and a local state-of-the-art luxurious mikvah helps the sisterhood of Downtown Shluchos to persuade our community members to ‘take the plunge.’”

“Through Covid and economic collapse, the community has seen this project through,” explained Rabbi Yosef Moscowitz, who has run Chabad of Bucktown since 2006, and also serves as executive director of Lubavitch Chabad of Illinois. “Savvy investors know where their tzedakah makes real impact, and mikvah, especially one close by, is the best bang you can get for your charitable dollars. Generations will be born in sanctity, and marriages will be preserved, thanks to their wisdom and foresight to partner in this special venture.”

The grand opening, titled “A Celebration of Spirituality and Music” will be the first of many Hakhel events for Chabad of Illinois in 5783. The event will take place on Sunday, the seventh of Tishrei, and will feature music by Yaakov Lemmer accompanied by an elegant dinner.

Details can be found at CityMikvah.org.