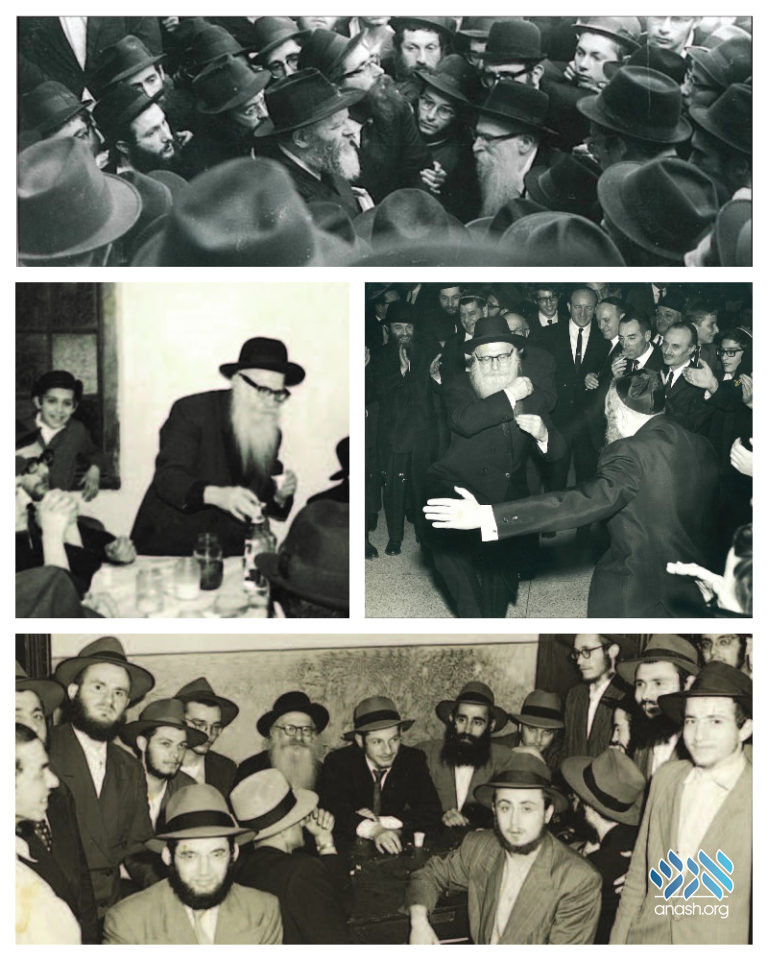 In honor of the 50th yahrzeit of the unforgettable Chassid Reb Zalman Duchman, we present a brief biography and some of the unique stories he was so well known for.

The Chassid, R’ Shneur Zalman Duchman, was born in Homil on 11 Elul 5651/1891 to his parents, R’ Dovber Menachem Mendel and Mrs. Feige Rishe. He was taught by his grandfather, R’ Mordechai Yoel Duchman of Homil, who was one of the yoshvim (married full-time students) by the Tzemach Tzedek.

At the young age of fourteen, he went to Yeshivas Tomchei T’mimim in Lubavitch. There, in the proximity of the Rebbe Rashab, he acquired his main chinuch and Chassidus. After marrying Chaya Grunya Minkowitz, daughter of R’ Leima, he moved to Homil. His father was not present at his wedding since he had succumbed to typhus that was prevalent in Russia at the time.

When the Nazis began their invasion of Russia, he was in Leningrad. Due to the terrible German bombing which destroyed the city, the Duchman family left for Samarkand where many Lubavitcher Chassidim had escaped from the war. The Duchman family left Russia in the mass migration of 1946-7, going from Lemberg to Cracow to the refugee camp in Germany.

In 1949, he received a letter from Ramash telling him to collect and write his stories. R’ Duchman received instructions from the Rebbe to go to isolated communities in the United States in order to inspire them to do Torah and mitzvos. There, he told them his stories which made a great impression.

He wrote his stories in a book called L’Sheima Ozen which was printed in 5723. It is a compilation of stories about the Chabad leaders, some of which he heard himself and some of which he heard from his grandfather, R’ Mordechai Yoel who heard them from R’ Yitzchok Isaac of Homil, the rav of Homil and one of the distinguished Chassidim of the Alter Rebbe.

The Rebbe was greatly involved in the printing of this book, starting with the initial writing and then the preparations for printing and publishing. R’ Shneur Zalman would submit his memoirs for the Rebbe’s perusal and the Rebbe would respond, sometimes making notes in the margins. The Rebbe personally examined most of the book.

R’ Duchman served as a shadar – raising money for the Chabad institutions. He also served as chazan in the Rebbe’s minyan many times. He was also the one the Rebbe chose to say Kaddish for his brother, R’ Yisroel Aryeh Leib, since he did not want his mother, Rebbetzin Chana, to know of his passing. R’ Duchman passed away on 8 Adar 5730/1970.

As I Heard Them

The collection of stories by R. Zalman Duchman is unique amongst the various volumes of Chabad stories – both in content and in style.

Many of the stories in his collection are exclusive and not recorded elsewhere. R. Zalman drew his stories from a variety of sources: his grandfather R. Mordechai Yoel Duchman, a close student of R. Aizik Homiler and other early chassidim; happenings that he witnessed himself; tales shared by the mashpi’im and chassidim in Lubavitch; personal incidents that fellow chassidim shared with him.

What’s even more unique is his raw and authentic style. He shares with us many short recollections and quotes that left an impression upon him. His own impressions and commentary lend insight into the mindset of a warm tomim. Sometimes he will trail off midsentence, expressing a feeling or thought that can’t be captured in words.

The following are selected stories.

Not Blocked by a Door

They told the story in Lubavitch of the time when the Rebbe came to the ohel. There was a shul there, and a small door opened from the shul into the ohel. One of the ohel’s four walls was the shul’s wall and it had no roof. On that occasion the door was locked and the shamash, unnerved, came running with the key.

“If a pile of earth doesn’t obstruct [their presence],” the Rebbe asked him, “will such a thin door?”

My uncle, R. Yehudah Leib Chasdan — the shochet from Homil (they called him the Sebezesher shochet) — told me the event he witnessed: when he was in Rebbetzin Rivkah’s home he heard her davening in the next room. When she reached Kriyas Shema he saw on his watch that her meditation on Echad lasted 20 minutes.

I heard from the gvir, R. Yosef Yozik Gurevitch of Warsaw, that — together with his son-in-law, R. Feivel Zalmanov (may G-d avenge his blood) — when he traveled to the Rebbe outside of Russia, the Rebbe instructed them to mekabel shalom (shake the Rebbe’s hand).

When they were invited to come to the Rebbe on Shabbos evening and there wasn’t any wine available, the Rebbe said: “It doesn’t feel right to hold a knife while reciting Kiddush,” and instructed them to make Kiddush over liquor, although he personally recited Kiddush using challah.

When they returned Shabbos morning the Rebbetzin asked them: “Have you davened?”

“Ah! How he davened!” she said about the Rebbe. “I barely survived!”

My brother Baruch, of blessed memory, told me in Homil over a couple of LeChaims that when he was studying in Tomchei Tmimim in Lubavitch, the Rebbe Rashab instructed him in yechidus to stay up (and study, “zitzen”) seven nights. How? “For example: when you awaken on Thursday morning, you must not lie down that entire day; then stay awake the whole night and — for the entire next day — not lie down until the evening.”

Each time he was apprehensive: perhaps he had dozed off? So he would do it again. In short, he stayed awake in such a fashion for 15 nights.

“He put his hand on my head and we cried…”

One erev Yom Kippur in Lubavitch, after Mincha, I saw the venerable chossid R. Pesach Kuper of Taganrog come out of the Rebbe’s room wearing a tallis and kittel and saw that he had been crying. He had gone inside, he told me, to ask the Rebbe for his erev Yom Kippur blessing, and the Rebbe wanted to bentch him.

In the time of the First World War, R. Zalman Havlin passed through Homil with his brother Lipa from Postov, near Kiev, whom he had gotten released from his regiment for a half year. He related that when he asked the Rebbe about his brother’s draft notice, the Rebbe replied that he should think about obtaining a passport. Now R. Zalman was quite well-versed in these matters, and he raised some other ideas.

“Listen, Zalman,” the Rebbe told him, “there’s a life at stake. What was said – was said. But when you start [reasoning] with me this way, I don’t know what to say.”

To Sing While Davening

A yungerman came to the Rebbe for yechidus one summer day in the large zal in Rostov. The Rebbe’s face was radiant. “I am accustomed to sing while davening,” he had asked, “would it be better to hold myself back?”

“No… no,” answered the Rebbe, “these are the G-dly soul’s powers revealing themselves.”

When R. Yosef Lipschitz of Kariokovka was being treated by Dr. Brook, the eye doctor in the hospital in Homil, I went with my zeide to visit him. R. Yosef recounted what he had heard from the Rebbe: “When something happens to a Yid, every Yid has the power to open up the Tanya and say: ‘Rebbe, help me!’”

(This seems to be where the custom of placing a pidyon inside the Tanya came from – S.Z.)

At Least You Won’t be Elsewhere…

Yekusiel Golodetz told me in Leningrad of an occasion when the Rebbe was in Petersburg.

The renowned gvir, R. Shmuel Gurary, was staying in a room there, and one of the Rebbe’s relatives — his Uncle Zalman’s wealthy son, Alexander — dropped by to visit. R. Shmuel Gurary began to chastise him for not coming to the Rebbe more often. When the Rebbe passed by the room where they were sitting, Alexander, who was quite self-assured, told him how he was being browbeaten.

“Regarding your presence here,” answered the Rebbe, “I don’t know. As long as you’re here, though — you won’t be somewhere else!”

They recounted in Lubavitch that Rebbetzin Rivkah said: “My son behaves like three different people. Before davenen he does not taste anything — like a misnagid, since they daven early. Davening — he actually davens like a chossid, quite late. And when it comes to eating — he eats like a Polish guter yid (chassidic Rebbe).“

To purchase Reb Zalman’s book ​‘As I Heard Them’ – ​stories, sayings and memories from Lubavitch of yesteryear click here.

For a full biography see below: