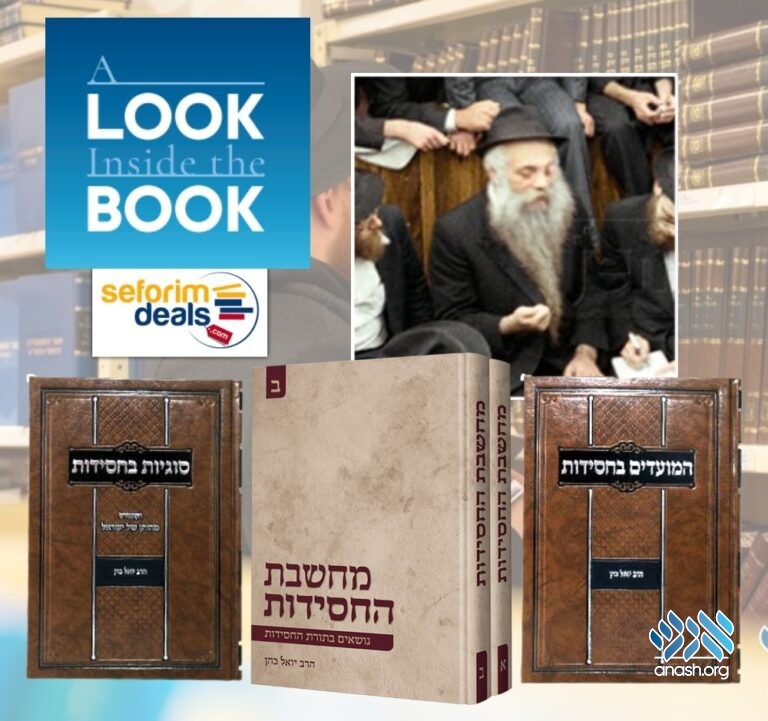 A Look Inside the Book: Reb Yoel Kahn can be compared to a builder. He took the pre-existing material scattered among many sifrei Chassidus, and fashioned a building out of it. A number of recently printed books are prime examples of that.

The recent passing of Harav Yoel Kahn, universally considered the preeminent expert on Chassidus, was a major loss for the entire Chabad community. Many articles have been written about R. Yoel and his contribution to Chabad Chassidus, each highlighting different aspects of his personality and work. In this article we will review some of R. Yoel’s important written works, and highlight his unique contribution to the way Chabad Chassidus is studied and understood.

With the notable exception of Tanya, most of Chassidus was not written in a systematic way. A maamar typically starts with a pasuk from the weekly parshah etc., and uses it as a starting point to explain a particular point. The following maamar can then address a completely different topic.

The body of printed sifrei Chassidus from our Rebbeim now spans hundreds of volumes. Every major topic in Chassidus is addressed in multiple different maamarim, each of which discuss it on a different level or from a different angle. As a result, a student can learn many maamarim, understanding each one of them quite well, yet still not have clarity on a given topic. What role does each level and aspect play in the full picture? What does each of the different explanations contribute?

In the past, the focus of limud Chassidus was very strongly on the avodas Hashem it is designed to generate. For this purpose, it doesn’t matter so much whether one has all of the details of the topic fully organized. The important thing is to learn the specific maamar at hand seriously, with wholehearted sincerity, and live with the message and feelings it conveys about serving Hashem.

There were individuals in the past that attempted to explain Chassidus in an organized and systematic way. Rabbi Nochum Tuvya of Piratin was one of the great chassidim of the Tzemach Tzedek, and later of the Kopust branch of Chabad. He wrote his own explanations of Chassidus, in the form of “masechtos,” organized comprehensive treatments arranged by topic. But the Rebbe Rashab expressed his displeasure at this style of learning Chassidus. (See Sefer Hasichos 5705, p. 15. Nevertheless, we find in the Rebbe Rashab’s Igros Kodesh (vol. 6, p. 9) that he wanted copies of R. Nochum Tuvya’s kesavim.)

In our generation, however, the Rebbe wanted us to focus on a thorough understanding of Chassidus as well. In a very revealing letter to Rav Shlomo Yosef Zevin (Igros Kodesh, vol. 27, p. 133), the Rebbe writes that for many years he has felt the need for works organizing Chassidus by topic. The Rebbe writes that he began preparing the groundwork for such a work himself, by writing mafteichos to the foundational sifrei Chassidus.

Eventually the Rebbe entrusted R. Yoel Kahn with the responsibility of implementing his vision, in the form of the Sefer Ha’erchim encyclopedia of Chassidus.

In Sefer Ha’erchim, R. Yoel took systematic organization to its most comprehensive level. In these volumes, every small detail of the topic is incorporated and analyzed. He took this so far that he was only able to complete eight volumes of Sefer Ha’erchim in his lifetime—all still under the letter alef—and many find the work difficult to use due to its great length. The Rebbe wasn’t completely pleased with the lengthy nature of Sefer Ha’erchim, but commented to R. Zevin that he finds it difficult to hold the editor back from koching in Chassidus (Igros Kodesh, vol. 32, p. 79).

But R. Yoel’s work in the field of systematic explanation of Chassidus area is not restricted to Sefer Haerchim. Organization was his nature, and he brought structure to everything he taught.

R. Yoel’s function can be compared to that of a builder. A builder takes pre-existing raw materials and fashions them into a complete structure, in which every piece serves a specific defined role in the larger edifice. Similarly, R. Yoel took the pre-existing material scattered among many sifrei Chassidus, and fashioned a building out of it. In this organized structure, there is a clear progression from level to level, every area is fleshed out with its full dimensions. When explained by R. Yoel, every element has its defined place, and they all combine together to form a complete building.

R. Yoel’s perfectionism in writing was a significant barrier to publication. As a result, almost all of the works that appeared under his name were written up by others, based on his shiurim or dictation, and edited by him.

The last decade specifically saw the publication of a series of new seforim by R. Yoel, as Rabbi Eliyahu Kirschenbaum, a mashpia in Kfar Chabad entered the picture. R. Yoel was comfortable with R. Kirschenbaum’s writing style, and collaborated productively with him on the publication of many articles and seforim.

Machsheves Hachassidus were the first books under the name of R. Yoel as the author. The contents of these two volumes first appeared as articles in Kfar Chabad magazine, in the 5740s. R. Yoel recorded tapes specifically for this purpose, and the articles were written up by the magazine staff.

These articles were later edited by R. Menachem Mendel Kaplan, and published in two volumes, in 5761 and 5765. They have recently been reprinted with a new cover, but no changes were made inside the books.

Machsheves Hachassidus addresses basic Torah concepts, explaining them as they are illuminated by the teachings of chassidus in general, and the sichos of the Rebbe in particular.  The topics covered include the essence of the Jewish neshamah, Torah, mitzvos, beriah yesh me’ayin, hashgachah peratis, reward and punishment, miracles and nature, and more. Machsheves Hachassidus is written in a very simple style, using relatable meshalim and eschewing technical language. As a result, these books should be understandable to anyone with a basic Jewish education and knowledge of Hebrew.

For example, the chapter about the Chassidic definition of tzadik, beinoni and rasha (vol. 2, chapter 1) explains this basic concept from Tanya in simple everyday language, without resorting to the technical terms, such as kochos hanefesh and levushim, that are used in Chassidus.

Relatable meshalim are used to illustrate the ideas. To explain how a beinoni feels that any act not in accordance with Hashem’s will is not even in the realm of possibility, an example is brought from the attitude of a frum person towards driving on Shabbos. While we can well understand the pleasure someone may feel from doing this, we can’t even imagine doing it ourselves—the possibility doesn’t even enter our minds. A beinoni, we are told, has this same attitude to all of Torah.

These books don’t explain deep topics in Chassidus such as sovev kol almin and memale kol almin, and the sefiros. The topics chosen are general Jewish concepts, explained according to Chassidus. Rather than a work of deep Chassidic haskalah, Machsheves Hachassidus presents a chassidishe hashkafah.

Readers will learn the chassidishe hashkafah regarding key elements of Torah and Jewish life. These books are especially recommended for mesivta and high school age students who will benefit greatly from the clear and organized presentation of the chassidishe perspective on life.

Available separately, Hamoadim BeChassidus and Sugyos BeChassidus are essentially a set. Hamoadim contains articles on the Yamim Tovim of the Jewish calendar, and Sugyos addresses concepts in Chassidus.

These seforim collect R. Yoel’s regular articles published in the Maayanotecha journal, written up by R. Kirschenbaum. The Maayonotecha articles have been published in various forms over the years, reaching the Sugyos/Moadim form in 5773. The new 5781 edition includes 5 new articles in the Moadim volume, and a separate lenghty kuntres written by R. Yoel, Mehusam Shel Yisrael, has been appended to the Sugyos volume.

Hamoadim BeChassidus and Sugyos BeChassidus belong to the same general genre of systematic presentation of topics in Chassidus, but are written on a higher, more sophisticated level than Machsheves Hachassidus. The articles are more comprehensive, go deeper into the topics, and use the technical terms found in the original Chassidishe seforim.

One important chapter in Sugyos BeChassidus addresses the reason for the creation of the world. Three different reasons are given for this in Kabalah and Chassidus: (a) Hashem wished to express His powers, (b) so that the creations should acknowledge His greatness, and, (c) an inexplicable desire for a dirah betachtonim.

This chapter contains a section devoted to each of these reasons. For each reason, R. Yoel presents an in-depth explanation, an analysis of its meaning, an exploration of the level of Elokus it reflects, and a discussion about its practical implications for our avodas Hashem.

The chapter devoted to the upcoming Yom Tov of Chanukah in the Moadim volume explores the two miracles Chanukah: the victory in the war and the small jug of oil that lasted for eight nights.

The meaning of each of these miracles and the role they play in Chanukah is explained clearly and methodically, weaving together a number of maamarim and sichos of the Rebbe. First, we learn that the decree leading up to Chanukah was a spiritual-themed decree, against Torah as a divine wisdom and way of life.

Taking a deeper look at miracles and nature, we learn that, counterintuitively, the seemingly lower form of miracles that appear in a natural guise actually possess an advantage over the overtly supernatural miracles.

The “natural” miracles express the compatibility of Elokus with the world itself—without needing to violate all of its rules. But a “natural” miracle alone can allow for the mistaken impression that everything was indeed natural, hence the need for a completely supernatural miracle as well to underline the complete subservience of the world to Elokus.

Finally, this understanding is applied to avodas Hashem. The super-rational emunah in Hashem inherent in every Jew is indeed the greatest expression of pure Elokus, but it must also be expressed within the realm of reason as well—showing that Elokus isn’t an imposed foreign power but the very essence of the world itself.

The Sugyos and Moadim volumes do contain footnotes referencing the sources for some of the key ideas. But it would also have been a good idea to provide a list of the primary sources at the conclusion of each chapter, to enable those that wish to explore the topic further in the lashon harav to find it easily.

In addition, the kuntres Mai Chaunkah authored by R. Yoel in 5755 could have been included as an appendix to the Moadim volume. This kuntres addresses the same theme of Chanukah discussed above, but at much greater length and depth.

The two sets of seforim reviewed above fill an important need in the field of limud Chassidus. Each chapter takes a topic from Chassidus and transforms it into a lucid and complete unit. As such, these seforim are not just for people taking their first steps in the world of Chassidus. Experienced students will also benefit greatly from the systematic organization and clear presentation of the topics in these seforim. The raw materials may be familiar to them already, but the well-constructed edifice R. Yoel fashions out of them will bring a new light and clarity to the topic.