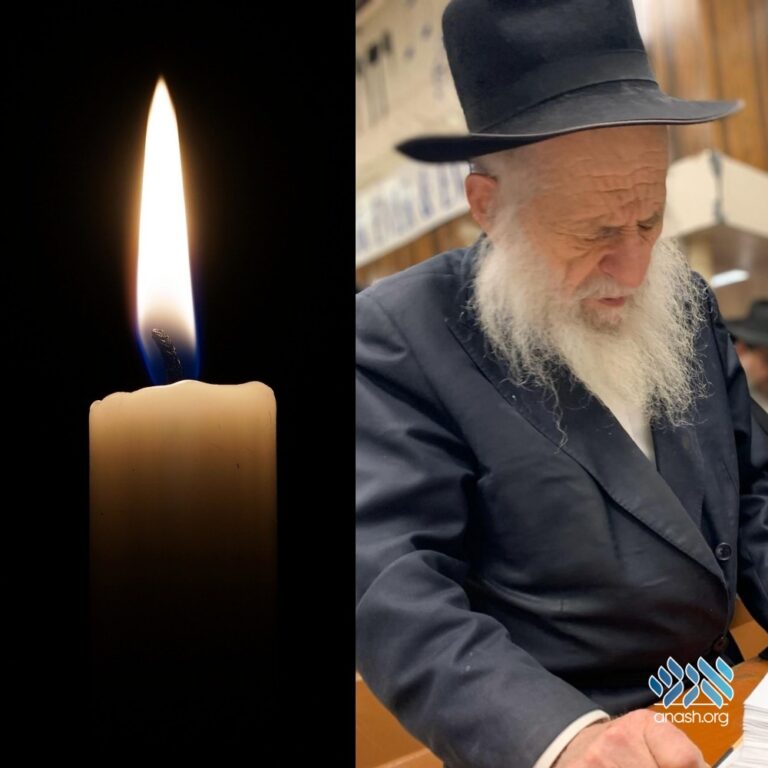 Rabbi Pinye Korf, who served for decades as a mashpia and taught Chassidus to thousands of bochurim and adults, and was seen as the quintessential chassidishe yid, passed away on Tuesday night.

If one were to ask people to describe Reb Pinye Korf, the word he would probably hear most often is ‘bitul’. Throughout his life, Reb Pinye served in many roles, including mashpia for bochurim and adults, teacher of Chassidus to thousands and dedicated mivtzoim activist. Yet, no matter what he was doing at the time, it was always clearly apparent that Reb Pinye was an eved Hashem, doing what the Eibishter wanted of him at that particular moment.

If it was the time for learning Nigleh, he was sitting there with a Gemara or Shulchan Aruch. If it was time to daven, Reb Pinye was davening, imbuing the words with a true chassidishe feeling, inspiring those watching him without trying to do so. At times when the Rebbe had instructed chassidim to farbeng, he farbrenged. To dance on the streets for simchas beis hashoeva, he spent the full night, at an advanced age, dancing on Kingston Avenue. If the moment demanded the spreading of Chassidus, Reb Pinye was there in full force, whether by teaching young students, seasoned Crown Heights elders, or even risking his life to teach Tanya in hostile communities.

It was this genuine chassidishkeit, the absolute dedication to the Rebbe, and the authentic, unadorned and unvarnished devotion to living as a Chabad chossid, that made so many view him as the quintessential chassidishe yid, a window into the previous generations of acclaimed chassidim. It was that same admiration that had Lubavitchers shocked when he passed away on 20 Tammuz, 5781, despite his poor health, being unable to imagine a world without being able to come into 770 and see Reb Pinye swaying under his tallis, or farbrenging on a yome depagra in the small zal upstairs.

Pinchos, or ‘Pinye’ as he was fondly known, was born in Charkov, Ukraine, to Rabbi Yehoshua and Chaya Rivka Korf on 20 Iyar 5695. In his youth, he studied in the underground yeshivos in Soviet Russia.

In the years of WWII, the Korf family escaped to Samarkand, where a large number of Chabad Chassidim had gathered to escape both the war and the close Soviet scrutiny. In 5707, as the Soviets began allowing Polish citizens to travel back to Poland, many chassidim forged passports to take advantage of the crack in the Iron Curtain, and the Korf family joined as well.

After the successful escape, the chassidim, among them the Korf family, were placed in the Displaced Person Camp in Poking, Germany. Young Pinye was one of the first students in the Tomchei Tmimim established in the DP camp. He later traveled to France to join the newly established Tomchei Tmimim in Brunoy. There, he studied under the renowned mashpia Reb Nissen Nemenov.

In Shevat of 5713, the Korf family received visas to the USA, and the family moved to Crown Heights to be in proximity to the Rebbe, and Pinye joined Tomchei Tmimim of 770. He later studied in Tomchei Tmimim Montreal as well, under the guidance of the renowned mashpi’im and chassidim who lived there.

Following his marriage to his wife Chaya, Reb Pinye was appointed as a mashpia in Yeshivas Tomchei Tmimim in Newark, New Jersey, which later moved to Morristown. For a number of years he lived in Montreal, and served as a mashpia in the Yeshiva there.

In 5730, he returned to Crown Heights, and was appointed as a mashpia in Oholei Torah, a position he served for decades. Together with his role as a mashpia to bochurim, Reb Pinye was involved in mivtzoim and hafatzas hamayanos, and was an active member of Tzach, Mivtza Mezuza, and in later years, the F.R.E.E. organization for immigrants from Soviet countries.

Reb Pinye also taught Chassidus to adults, both in Crown Heights, where he held shiurim for many decades, as well as in frum neighborhoods throughout the New York area. In the early 5740s, he began giving a shiur in Tanya in Williamsburg, then a hot bed of anti-Chabad sentiments.

In Sivan of 5743, Reb Pinye was attacked during one such Tanya shiur in Williamsburg, and his beard was cut. on Shiva Asar B’Tammuz of that year, the Rebbe addressed the assault in a public sicha, connecting the event to the Parsha of the week, Parshas Pinchos, whose name Reb Pinye bears.

In recent years, following the passing of Rabbi Itche Springer, Reb Pinye assumed the role of mashpia of the 770 yeshiva.

After contracting coronavirus last year, Reb Pinye was hospitalized and chassidim around the world davened for him. His condition stabilized for a short amount of time, but in recent months his health deteriorated, and he passed away on Tuesday night.