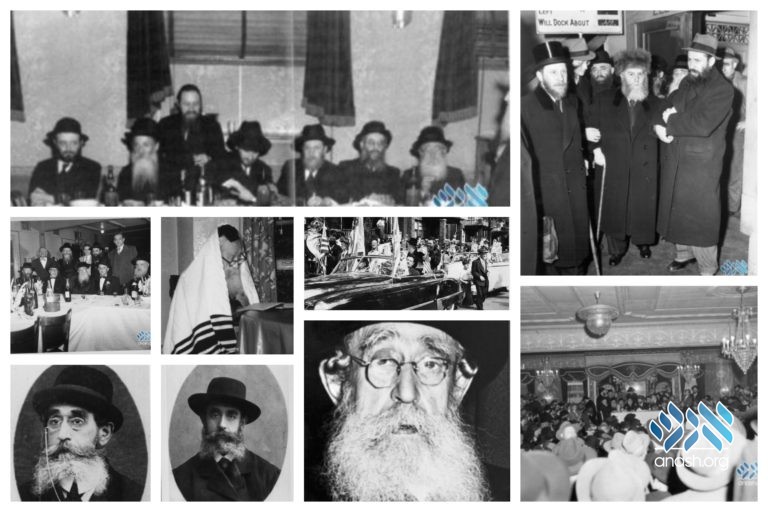 Across the road and next block from 770, there lived a Yid by the name of Reb Moshe Chaim Yehoshua Schneersohn-Twerski – the Tomashpil-Koidenover Rebbe. He was born to Reb Mordechai Dov and Batya Twerski in Tomashpil, Ukraine, around 5627/1867. He was a great-grandson of the Mitteler Rebbe on his father’s side, and a descendant of Reb Levi Yitzchok of Berditchev on his mother’s side.

As a young man, Reb Moshe’le, as he was called, received semicha from some of the great geonim of his generation. He married the daughter of the Koidenover Rebbe, Rav Yosef Perlow, who passed away in Kislev of 5676/1915.

In 5684/1924, Reb Moshe’le left the Soviet Union and made his way to America. He managed to smuggle out a sefer torah which was used by the Mitteler Rebbe. This Torah is now used in his eynikel’s shul in Flatbush.

Reb Moshe’le was in close contact with the Rebbeim, and he would often come to the Frierdiker Rebbe to discuss klal matters. He was at the dock to receive the Frierdiker Rebbe when he arrived in America on 9 Adar II, 5700/1940. (See photo below.) Soon after, he moved to Crown Heights.

During the Rebbe’s nesius, Reb Moshe’le attended farbrengens and was awarded great kavod. It once happened that the Rebbe arrived back at 770 from the ohel very late and Reb Moshe’le was there waiting. When the Rebbe saw him he apologized for davening so late. Reb Moshe’le answered: “ven der Rebbe davent yemolt iz di tzeit,” whenever the Rebbe davens, that’s the proper time.

He was active in the realm of Taharas HaMishpacha, and helped build mikvaos all over the USA.

The Rebbe traveled to the beis oylam but stayed outside, since he had not prepared to go to the Frierdiker Rebbe’s ohel. When the Rebbe returned to 770 he asked Reb Zalman Duchman to say kaddish, despite the fact that he had a son saying kaddish for him.

On 14 Elul, the Rebbe went to be menachem avel the children. There, he joined the learning of mishnayos which was going on at the time and waited while the assembled davened maariv.