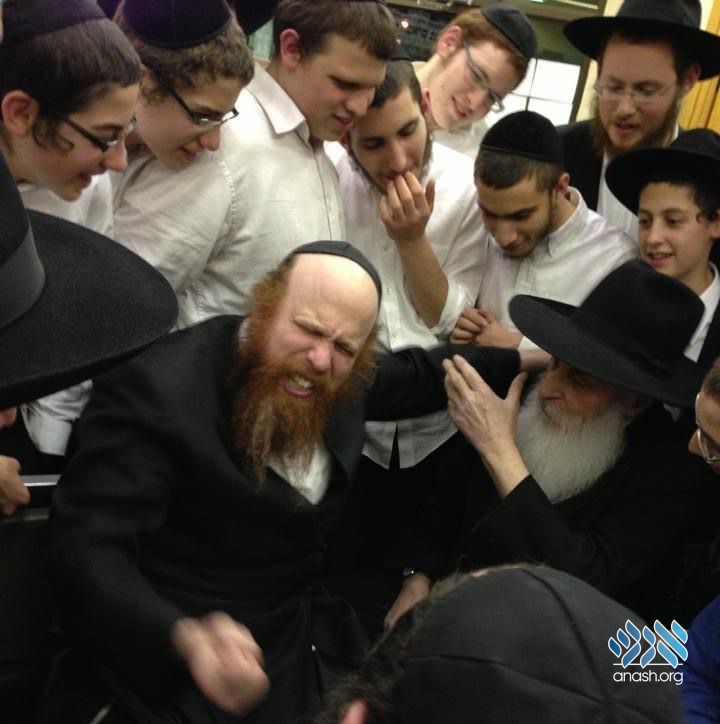 Rabbi Gershon Avtzon, who spent four years in Toronto yeshiva, recalls the many farbrengens he attended with Reb Mendel Aronow, his unique style, and three stories Reb Mendel related that stuck with him until today.

I merited to learn in Yeshivas Lubavitch Toronto for four years. I was there for two years (5758-5759) as a talmid and two years (5762-5763) as a shliach. From the very beginning of my time there, Rabbi Akiva Wagner shlit”a (may he have a complete Refuah Shleima!), pushed us to “go farbreng with Reb Mendel Aronow“.

For many years, Rabbi Aronow was a “lonely but proud soldier” in the “down south” Toronto community. Yet, in his unique stubborn way, would always have special farbrengens in one of the local Batei Midrash (which was near the Yeshiva) accompanied by his son-in-law Rabbi Wilhelm. As time went on, he would come to the Yeshiva after davening and farbreng. While their styles of farbrengen differed tremendously -I like to describe Rabbi Wagner as chessed and hispashtus and Rabbi Aronow as gevurah and tzimtzum – Rabbi Wagner would always sit quietly and wait for Rabbi Aronow to speak or until he said “Rosh Yeshiva, zug epes”.

To be open and honest, it took a long time to get used to and “appreciate” the Farbrengen style of Reb Mendel Aronow, but – as I matured, and with constant encouragement from Rabbi Wagner – I learned lessons and teachings that stay with me until today. I will share three stories and lessons (from dozens) that I heard from Rabbi Aronow.

The first story, he witnessed as a child: At one point, the holy chassid Reb Dovid Horodoker came to stay in his house. His father, who considered it a big zechus and a special occasion, asked his mother to prepare a chicken for supper. It seems that there was shayala on the chicken and she brought it to the local rov who paskened that it was Kosher. His father got upset, as Reb Dovid himself was a rov, and he was eating the chicken! His father told his mother to bring the chicken to Reb Dovid himself. Reb Dovid saw the chicken and right away said (without knowing the history): “A shayla was already asked to a different rov on this chicken. What did the rov say?” When he was told that the rov said Kosher, he said that is fine with him.

The second story: One Purim night, we were farbrenging with Rabbi Wagner in the big Zal, and Reb Mendel came in. We asked him to say something and he said that later on in the farbrengen, he will reveal a big secret that was taught in Tomchei Temimim in Lubavitch. We waited and waited and he was quiet. Many Talmidim went to sleep, but I stayed up. Hours later, the big revelation came. He got up and said: “In Lubavitch hut men oisgelernt, az men lernt nisht, vaist men nisht – In Lubavitch it was taught: If you do not learn, you will not know anything” and with those words he left the farbrengen.

The third story: I was once sitting after davening by the table of Farbrengen and was hungry. I waited for the plate of cake to be brought out and quickly stretched out my hand to take from the few pieces there. Suddenly, I felt a slap on my wrist and a big voice screaming out “Karasik- Feh!” I suddenly realized that Rabbi Aronow had slapped me and was screaming at me. I did not know what he was saying and what he wanted from me. He saw that I was completely “lost” and explained: “Your elter-Zaide was Harav hachaasid Laibel Karasik a”h (a very chashuve chassid and rov) and it is not fitting for his einikel to be so involved in gashmius that he is the first one to stick out his hand to take a piece of cake!”

These lessons and stories, and many more, have stayed with me since. He was a true example of a chassid and mekushar to the Rebbe. May his family only know nechama and Yehei Zichro Baruch.