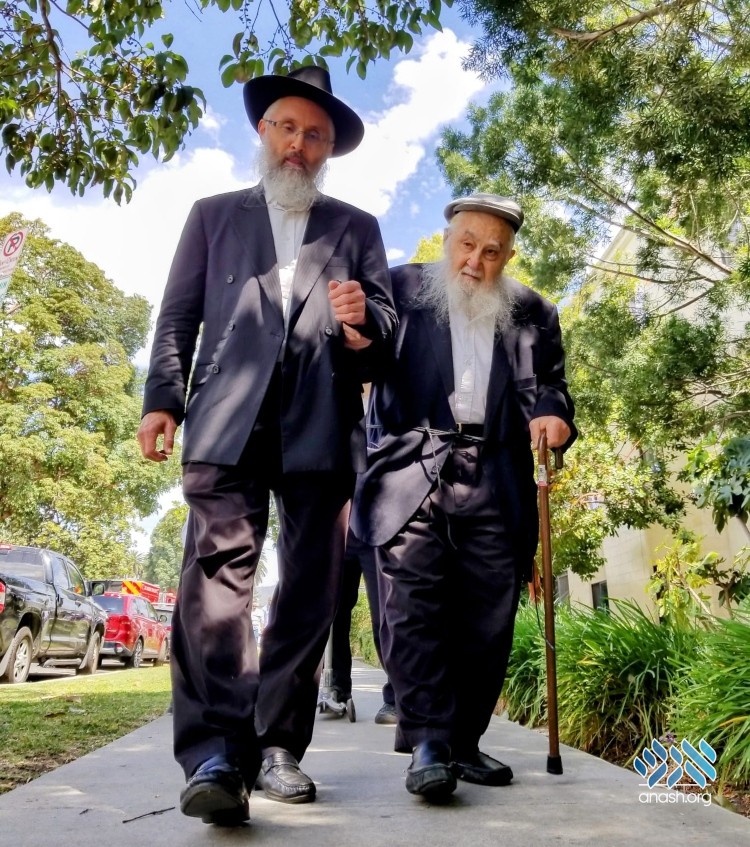 “Reb Dovid Mishulovin a”h, who passed away on Monday night may not have been one of the ‘well known’ chassidim, but he certainly made a huge impact on my life.” A tribute to a humble and authentic chossid by Yossi Lipskier.

It was 19 Shevat 5773. Just another Wednesday night in Yeshiva.

Our mashpia that year called me over after Seder. He asked me if I knew Reb Dovid Mishulovin.

I said no. I’d seen him from time to time when he joined the Zal for Mincha and Maariv, but never had a conversation with him.

He suggested I put together a group of bochurim and go to his home on Motzei Shabbos for Melaveh Malka. “He’s a walking treasure trove of chassidishe stories. Perhaps he’ll agree to share some with you”.

And just like that, a new routine started. Each week, four of us and one of our shluchim walked across the street and entered a different world.

A world where the Alte Chassidishe Heim came alive.

“Who is the sar hamashkim?” I remember Reb Dovid asking with a smile, as soon as we sat down the first time. His wife brought in hot water, potatoes and herring, “like we used to serve each week for Melaveh Malka in Samarkand.”

Though he was in his eighties and we were just teenagers, Reb Dovid schmoozed with us like with anyone else. He asked us our names, who our parents and grandparents were, what we were learning.

And then he got right to it.

“Motzei Shabbos is a time for telling stories, and I want to tell you about my time in Russia. But I need to give you an introduction…”

For 3 hours we sat, soaking in his vivid descriptions of Samarkand. Of the Chassidim who lived there and those who would visit. Of the farbrengens, the mesirus nefesh, and the dedication to the Rebbe and Chassidus.

We asked if we could come back the next week, and he agreed. And so it continued until the end of the year. 11 Farbrengens that I will never forget.

He would often say, “א מעשה דארף מען איבערזאגן ווי מען האט עס געהערט – one needs to repeat a story exactly the way he heard it”. And he was a living example of that, always telling us who he heard each story from and leaving out no details.

“Most of the stories I remember were told by Chassidim at the communal Melaveh Malka that was arranged each week in Samarkand. We would farbreng till about midnight, and then we would bentch. Afterwards, the stories started.

“Reb Yudel Chitrik was the lead speaker, and after he left the city he was replaced by Reb Berel Yofeh. ער איז געלעגן אין מעשיות ווי א שיכור ליגט אין בראנפן – he was into stories like a drunk is into his whiskey”.

Reb Dovid didn’t just have a good memory. He also had a good sense of humor.

He enjoyed telling stories of Chassidim and Misnagdim, always bringing out the incredible perspective that studying Chassidus brings.

He told of the high standards that the Chassidim held each other to, and how they weren’t afraid to let each other know where they were lacking in serving Hashem.

That brought him to lament what he saw as too much selfishness and ego in today’s generation.

“I see a big difference between Chassidim today and the Chassidim I grew up with. When I was growing up, it was not unusual for a Chossid to rebuke a friend or tell him a sharp “vort”. Everyone knew that one of the goals of Chassidus is אנקלאפן דער ישות – to knock down one’s yeshus. Today, you tell someone something sharp-witted and he holds a grudge for months!”

Reb Dovid spent a lot of time discussing Reb Berkeh Chein, who he saw as a model Chossid in those trying times. He was one of the few who kept his beard and walked around with a kapote.

He told us that any good quality that Reb Berkeh observed in others, he would adopt for himself.

Reb Berkeh was very particular about immersing in the Mikveh each day, to the point of mesirus nefesh.

“I saw this with my own eyes. When he visited Samarkand for a time, he first used the local river, but it became too dangerous because the KGB was after him. So it was decided that he would use the communal Mikveh that was built adjacent to the Shul.

“Reb Faivish was the man in charge of the Mikveh. Each morning, Reb Berkeh would take the keys and return them as soon as he was finished.

“Soon enough we found out that Reb Berkeh had a health issue with his lungs, and the bochurim who were in charge of the ruchniyus in the city (including me) decided that Reb Berkeh should be prohibited from using the Mikveh (which was incredibly cold), because if he got sick, we wouldn’t be able to get a doctor since he was hiding in our city and no one could know.

“So we told Reb Faivish not to give Reb Berkeh the keys anymore. The next day, Reb Berkeh came to the Mikveh as usual, but Reb Faivish refused to give him access.

“Reb Berkeh thought he was joking with him. ‘zman krias shema is approaching and I must use the Mikveh.’ Reb Faivish again said no. ‘quick, give me the keys!’ But Reb Faivish wouldn’t budge.

“In the end Reb Faivish gave in. Amazingly, Reb Berkeh never got sick.”

That year in Yeshiva, I had bought myself a recording device. So when we went to Reb Dovid’s house, I didn’t think twice and brought it along. Boruch Hashem today, close to a decade later, anyone who wants can now listen to these recordings and experience what we experienced.

A glimpse into the past.

A window to another time.

A Melaveh Malka with Reb Dovid.