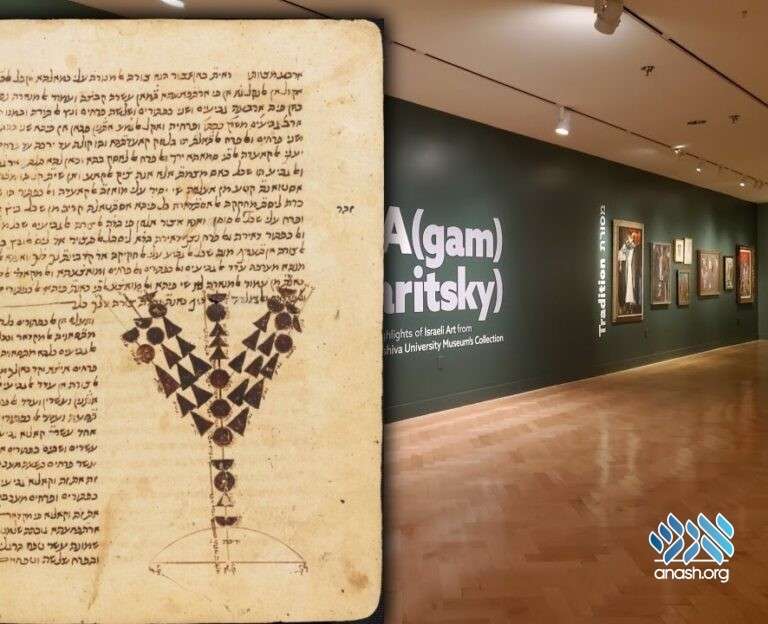 The Rambam’s original hand-drawn illustration of the Menorah in the Beis Hamikdash, often cited by the Rebbe as proof of the Menorah’s correct shape, will soon go on display at the Yeshiva University Museum.

An upcoming exhibition by Yeshiva University Museum will feature a hand-drawn illustration of the Menorah in the Beis Hamikdash from an original manuscript of the Rambam.

This unique manuscript of the gold menorah drawn by the Rambam himself is now being shown for the first time in New York City at the YUM exhibition. The Menorah drawing is found in a 12th-century copy of the Rambam’s Pirush Hamishnayos featuring his handwritten notes in the margins.

The Rebbe frequently argued that the correct shape of the Menorah in the Beis Hamikdash is straight lines and pointed to this manuscript of the Rambam along with his son’s testimony as proof. Many Chassidim will certainly be excited to see this manuscript with their own eyes.

The exhibition, The Golden Path: Maimonides Across Eight Centuries — which runs from May 9 to December 31, 2023 — will also feature a range of other highly important items, including a Mishneh Torah personally signed by the Rambam.

“It is our privilege to bring this collection of rare artifacts for public viewing,” said Gabriel Goldstein, director and chief curator of the Yeshiva University Museum. “It is one thing to view these items digitally, but visitors to the exhibition will marvel in awe when they see the manuscripts in real life, so well preserved.”

“Arguably, no other individual has had a more pervasive or enduring effect on Jewish religious life over the last millennium than Maimonides,” said David Sclar, exhibition curator. “This exhibition is intended to convey not only his importance but the ways in which people have shaped and been shaped by his impact.”

Items to be featured include rare pieces on loan from the Bodleian Library in Oxford, the British Library, the Royal Danish Library, the Mantua State Archive of the Italian Ministry of Culture and the National Library of Israel.