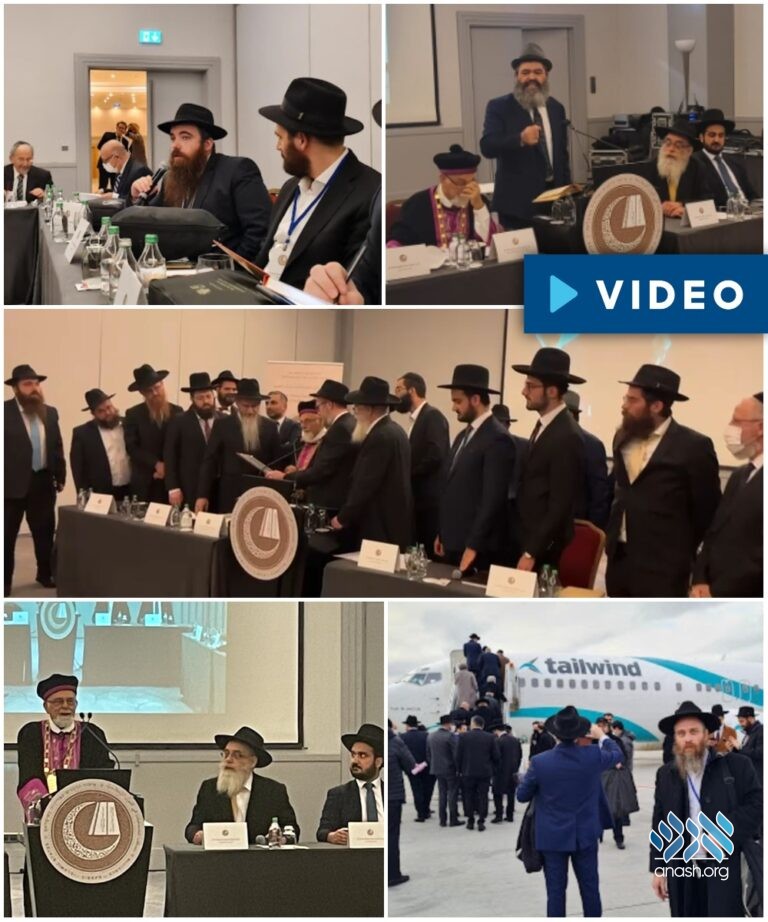 30 rabbis in Islamic countries participated in the first annual conference of the Alliance of Rabbis in Islamic States (ARIS), enjoying two days of intense discussions, fascinating sessions and a meeting with Turkish President Erdoğan.

After two days of intense discussions, fascinating sessions and a warm and cordial meeting with Turkish President Recep Tayyip Erdoğan, the first conference of the Alliance of Rabbis in Islamic States (ARIS) in Istanbul, Turkey, has come to a close.

The 30 rabbis who participated in it – sefardim and ashkenazim as well as Chabad shluchim – are currently returning to the 14 Islamic countries in which they live permanently, including Tunis, Morocco, Iran, the United Arab Emirates, Kazakhstan, Azerbaijan and more.

The guest of honor at the conference was Russia’s Chief Rabbi, Rabbi Berel Lazar. Rishon Litzion Rabbi Yitzchak Yosef, who is the halachic authority guiding the organization since its inception, was also supposed to join the special gathering, but due to Covid limitations, he was unable to attend. Instead, Rabbi Yosef sent an emotional letter to the participants, blessing them with great success in their important work of strengthening Torah and mitzvos.

“The Rishon LeZion is the halachic guide of the organization and we all benefit a lot from his guidance, rulings and advice,” said the organization’s chairman and founder, Rabbi Mendy Chitrik, shliach in Istanbul.

The members of the Presidential Council of the organization, at the request of the Rishon Letzion, are the chief rabbi of Tunis Rabbi Chaim Bitan, the chief rabbi of Turkey ‘Hacham Bashi’ Rabbi Isak Haleva, Rabbi Shimon-Gad Elitov, member of Montreal Bais Din Rabbi Rafael David Banon, and rabbi of the Moroccan community in New York, Rabbi Gad Bouskila.

The first day of the conference dealt with the relationship between government authorities and the rabbis and communities and culminated in a meeting with Turkish President Recep Tayyip Erdoğan, while the second day was devoted to halachic issues.

Rabbi Binyamin Hattab, director of the Jewish school in Tunis, told those present that the 20th of Tevet also marked the anniversary of the murder of his son Yoav hy”d in the terrorist attack on the “Hyper Cacher” kosher supermarket in Paris, 7 years ago.

The representative of the Jews of Egypt, Rabbi Yehuda Dayan, who was the rabbi of Alexandria and currently serves as the rabbi of Livorno in Italy, distributed his book to the audience about the last rabbis of Egypt. Rabbi David Chananya Pinto from Morocco gave his blessing over Zoom.

One of the decisions made at the conference was the establishment of a committee for Torah shiurim geared for the rabbis. The rabbi of the Muslim states of Albania and Kosovo, Rabbi Yoel Kaplan, was chosen to lead the committee, together with the head of the Bukharin community’s rabbinical association, Rabbi Shlomo Rabin and Rabbi Gerami.

During the day, the rabbis also participated in lectures on topics such as fundraising from philanthropic foundations, the use of social and written media to promote the community, and means of communication to stay in touch for the coming year.

“Jews living in Islamic countries are treated with great respect and are appreciated and assisted by the various governments,” said Rabbi Chitrik. “In Islamic countries, Jews live better than European countries where shechita or bris mila is prohibited. We are confident that conferences such as this one will help the Jewish communities and their rabbis in keeping mitzvos, learning Torah and strengthening all matters of Yiddishkeit.”