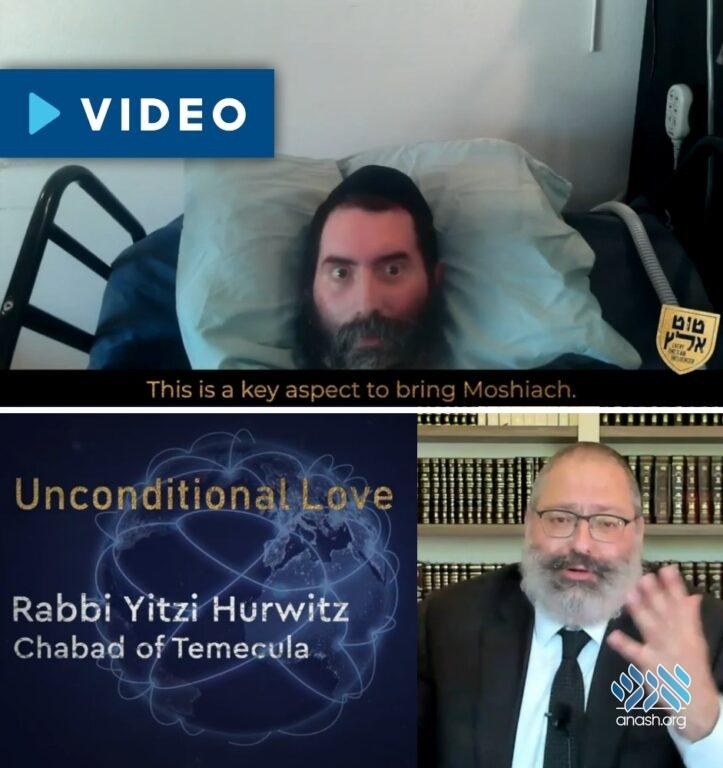 When tragedy strikes, it’s difficult not to give up. But when Rabbi Yitzi Hurwitz, Shliach to Temecula, California, was diagnosed with ALS, he never stopped his shlichus—he just channeled it differently. That’s why, when considering a keynote speaker for last week’s Chof Ches Nissan Mega-Farbrengen, Rabbi Yitzi Hurwitz was the obvious choice.

“Rabbi Yitzi is someone who exemplifies the theme of the whole farbrengen,” says Rabbi Zalmy Weingarten of the Moshiach Office at Merkos 302. “Despite his challenging circumstances, he has chosen to be a Mashpia and inspire thousands of people around the world.”

As part of the massive effort to commemorate Chof Ches Nissan, the Mega-Farbrengen featured 50 different speakers over 24 hours. Rabbi YY Jacobson, Dean of TheYeshivah.net, introduced Rabbi Hurwitz, saying, “Yitzi, it is an honor to know you, and on behalf of the hundreds or thousands of Jews watching now, we wish you that Hashem bring you a complete miraculous recovery.”

Throughout the 50 presentations, the theme was driven home again and again: every single person can be an influencer. “It’s not just shluchim and shluchos. Every Lubavitcher was given the power to influence others.”

However, Rabbi Hurwitz’s presentation of the theme of the day struck a deeper chord, “I have a lot going on in my life these days and although I was inspired by the various Farbrengers I felt like I had too much on my plate to get involved practically,” wrote a Lubavitcher that wished to remain anonymous, “after hearing Rabbi Yitzi’s speech and seeing all the work that he has done despite all that he’s going through, i decided to open up my own OneMitzvah page as well.”

As a practical takeaway from the Farbrengen, Many participants followed suit, creating pages on the OneMitzvah platform, where they set goals of their own and shared the campaign with others.

“Every one of us has a circle of influence, be it in the workplace Shul or home,” said Rabbi Mendy Kotlarsky, Executive Director of Merkos 302. “The OneMitzvah campaign was designed to give everyone a chance to utilize their influence to change the world.”

Become an influencer and join the campaign at OneMitzvah.org/signup.

Watch the full replay of the Farbrengen: https://youtube.com/playlist?list=PLYTqRxW76j8BTYl7U8LtQbXCrkZ_fQHaE