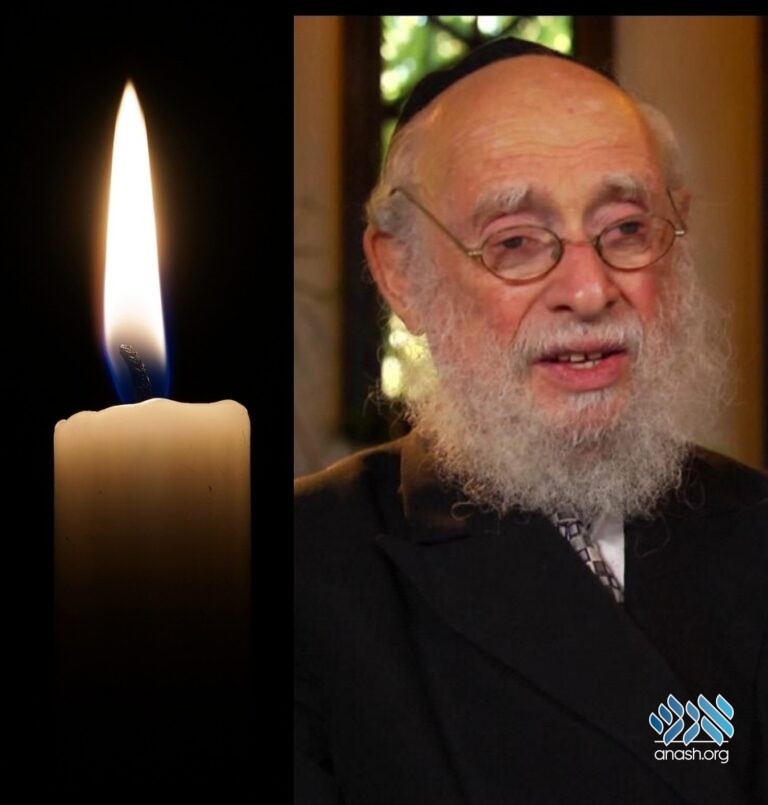 Rabbi Yitzchok Arnold, a chossid of the Frierdiker Rebbe and Rebbe who served as a shliach to Los Angeles for 45 years and director of the local ‘Kolel Tiferet Zkanim Levi Yitzchok’, passed away.

Rabbi Yitzchok Arnold, a chossid of the Frierdiker Rebbe and Rebbe who served as a shliach to Los Angeles for 45 years and director of the local ‘Kolel Tiferet Zkanim Levi Yitzchok’, passsed away on 10 Av, 5782.

Yitzchok’s first encounter with the Rebbe, long before he became the Rebbe, was during a Sukkos farbrengen in 1941. The Rebbe was speaking in the sukkah, and decades later Yitzchok recalled the farbrengen, saying that he remembered the dancing. “At the time I was just a kid, twelve years old, and I was hanging around the edge of the crowd when, suddenly, I felt a hand pull me from behind. When I turned around I saw it was the Rebbe — who urged me to join in the dancing, which I did,” he said.

He also recalled seeing the Rebbe’s immense respect for his mother, Rebbetzin Chana.

In 1958, while he was studying in yeshiva, the Rebbe instructed him along with about a dozen others, to go study in Eretz Yisroel for two years. It was there that he met his wife, Chana, and got married.

Afterward, they returned to the United States where they both took up teaching positions, eventually ending up in Los Angeles.

After five years of married life, the couple still had no children. At that point, Mrs. Arnold remembered a letter she wrote to the Rebbe long before, when she was a bride, about covering her hair as a married woman. At that time, the Rebbe had answered her, “If you cover your hair with a wig, as a married woman should, you will have children.”

She took that letter with her when she went to see the Rebbe to ask for a blessing. She put the letter on the table and said, “I have a promise.” And then she burst into tears.

The Rebbe recommended a particular fertility clinic, where he suggested she see a doctor whose name he
provided. We went there and, fourteen months later, their first son, Shlomo, was born.

In 1979, while R’ Yitzchok was still teaching high school, the Rebbe began to speak about the importance of the elderly, and how important it was to focus on them. R’ Yitzchok, who was serving as a shliach in Los Angeles was given an assignment to visit various institutions — such as old age homes and senior hotels — to connect with the elders.

“I was successful at this, at times visiting as many as twenty facilities in the Los Angeles area. I taught basic Hebrew and how to read the Siddur. After a while, | also added a class on the Parsha,” he later recalled.

At this time, he had an audience with the Rebbe and complained to him that people can’t relate to the Torah; they are always asking me what it has to do with modern day. In response, the Rebbe gave him this advice, “Go out and buy the local paper, read up on current events, and surely you will find something.”

“The other advice he gave me was not to push these people to become religious. I had mentioned that I encouraged the women to light Shabbat candles, and while I was at it, I decided to put tefillin on the men. He approved but he also said, “Don’t push. Take it slow. Let people come around, little by little, on their own.”

And sure enough, because of this, I was able to be influential in places previously closed off to me. There were times that I would spend over an hour helping elderly men put on tefillin, who had previously refused. The approach the Rebbe taught me helped me make a difference to so many of their lives,” he said.

The Levaya will take place on Monday, August 8th in Los Angeles, CA (times and additional details to follow) and will be passing 770 in NY on the way to the airport around 8 AM.