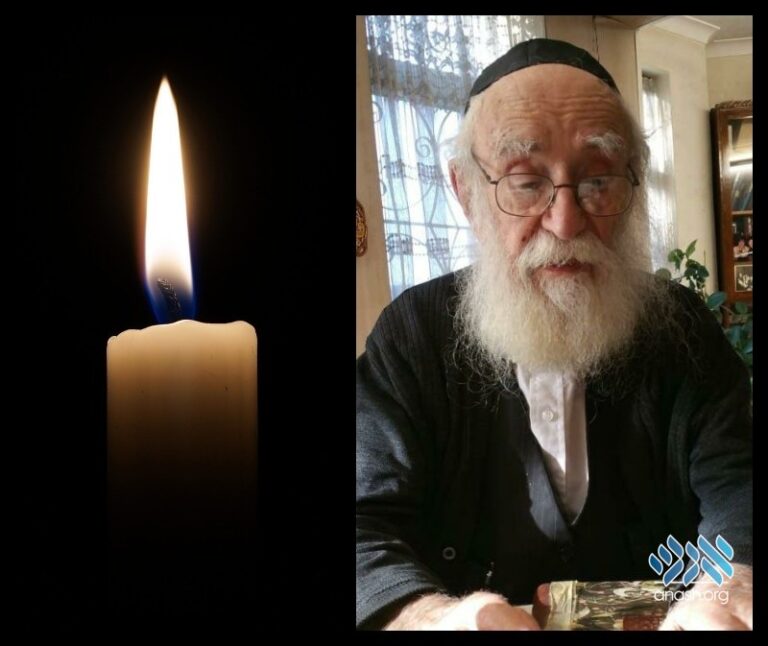 Rabbi Yehoshua Raskin, one of the prominent Lubavitcher chassidim and head shochet in London, and the last surviving child of ‘Mummeh Sarah’ Katsenelenbogen, passed away on Shabbos, 16 Elul.

Rabbi Yehoshua Raskin, one of the prominent Lubavitcher chassidim and head shochet in London, and the last surviving child of ‘Mummeh Sarah’ Katsenelenbogen, passed away on Shabbos, 16 Elul.

R’ Yehoshua was born on the 25 Nissan, 5683 to the renowned chassidim Rabbi Michoel and Sarah Katsenelenbogen. His father was among the first and most prominent students of Yeshivat Tomchei Temimim in Lubavitch. His mother served as the cook in the yeshivah and was active in the community, arranging underground Torah schools for young children and saving Jewish children from government orphanages.

Despite the danger, the Katsenelenbogen family retained an open home, inviting in many Chassidim fleeing from the Soviet secret police. They also held a small yeshivah in their home in Stari-Russia, an offence punishable by imprisonment or even death.

In the fall of 5689 (1937), his father R’ Michoel was taken away by the secret police and never seen again. They later discovered that he was shot, about six weeks after his arrest.

Following World War II his mother, known by all as “Mumme Sarah,” was at the forefront of the underground movement to spirit Jewish families out of Russia using Polish documents that were often forged or taken from people no longer alive. After sending hundreds of people to safety, she managed to save one passport for herself. However, when she learned that Rebbetzin Chana, the mother of the Rebbe, had no passport with which to flee, she gladly gave it up, allowing the Rebbetzin to escape.

Back in Russia, the authorities had gotten wind of Mumme Sarah’s activities, and she and her son Moshe were forced to flee to Kutaisi, Georgia. Eventually, the Soviets arrested her and her youngest son Moshe. She died in jail from a heart attack.

R’ Yehoshua himself managed to escape with two of his siblings. It was then that the name Raskin, his mother’s maiden name which he had adopted after his father’s arrest, was first written on official documents, and it was that name that he kept for the rest of his life.

He went on to learn in the Yeshiva in Brunoy, France, before marrying his wife Mrs. Bluma Solomon. He then moved to London, where he started working as a shochet, a position he held for many decades.

For many years, he served as the head shochet of London, serving as the head of the shochtim of the Kedassia kashrus agency.

R’ Yehoshua was known as one of the prominent Lubavitcher chassidim in London, and was respected by all those who he came in contact with as a real chassidishe yid with a true yiras shamayim.

The levaya will be held on Sunday in London.