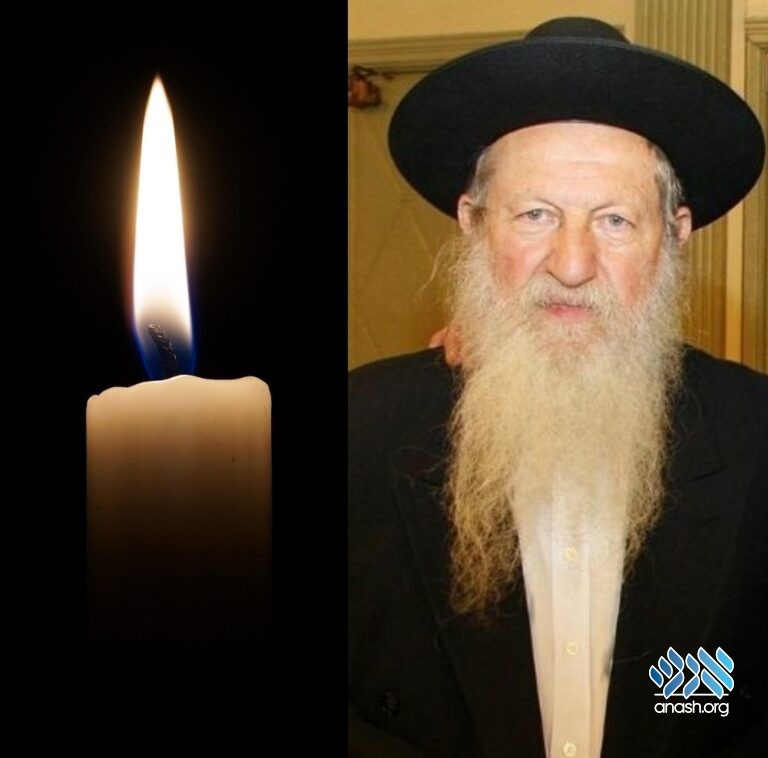 Rabbi Yaakov Tzvi Holtzman, who merited to service the Rebbe and Rebbetzin by helping out in their home, and was sent on shlichus to Antwerp, where he lived until recently moving to Crown Heights, passed away on Thursday, 4 Elul.

Rabbi Yaakov Tzvi Holtzman, who merited to service the Rebbe and Rebbetzin by helping out in their home, and was sent on shlichus to Antwerp, where he lived until recently moving to Crown Heights, passed away on Thursday, 4 Elul, 5781.

He was 87 years old, and passed away following a car accident.

Yaakov Tzvi was born on 5 Shevat, 5694 to Rabbi Yitzchok Manis Holtzman in Paris, France. Following WWII, as a child survivor of the Holocaust, the young boy ended up in a Chabad orphanage in Paris. There, he met the Rebbe for the first time, when he traveled to Paris to meet his mother Rebbetzin Chana, and escort her to New York.

During the Rebbe’s stay in Paris, he visited the orphanage and tested the kids on their Torah knowledge, awarding prizes. Yaakov Tzvi, who was thirteen at the time, used this opportunity to ask the Rebbe if he could come to America. A year later, in 5709, a visa was arranged for him and he traveled to USA, and settled in Crown Heights. There, he saw the Frierdiker Rebbe for the first time and enrolled in the the central Tomchei Tmimim Yeshiva.

In 5714, his relationship with the Rebbe and the Rebbetzin began. That year, the Rebbetzin had gone to Europe for a few weeks and, during her absence, the Rebbe’s meals were prepared by a local cook. Yaakov Tzvi was selected to pick up the food and serve it to the Rebbe. And then, after the Rebbetzin returned, he continued to help out. For about four years, he filled the role of their handyman – helping them prepare for Pesach and Sukkos.

“This is how the Rebbe and Rebbetzin’s house became his home away from home, so to speak,” his son Rabbi Yosef Yitzchok Holtzman related in a interview with JEM’s My Encounter.

Since he had lost his father during the war and his mother lived far away in Europe, the Rebbetzin looked after him. When he started shidduchim, she told him, “It’s not appropriate that you should go on every shidduch in the same suit,” and she gave him one of the Rebbe’s old suits to wear, so that he would have another. (The Rebbe then was no longer wearing a suit but a kapote, so this presumably was one that he no longer needed.)

In the late 5710s, Yaakov Tzvi married his wife Chaya Tzipora, a grandchild of the renowned mashpi’im Reb Shilem Kuratin and Reb Avremke Zebiner. The Rebbetzin sent them a wedding present, a beautiful set of silver cutlery.

Towards the end of 5726, the Rebbe instructed him to travel to Antwerp, Belgium, on shlichus, telling him in yechidus that “You occupy yourself with the men, and your wife with the women.” In Cheshvan of 5727, the couple moved to Belgium, where he founded the city’s first Chabad minyan, a Camp Gan Yisroel, a shop to purchase Chabad seforim, among many other activities in the city. Even when he was living in Belgium, the Rebbetzin stayed in touch with him and once, upon hearing that he was sick, she asked someone in London to send special medicine to him.

In later years, when the Holtzmans visited New York with their children, they would always came to see the Rebbetzin. The Rebbetzin would serve the children ice cream or other treats, and patiently answer all their questions.

In recent years, the Holtzmans moved to Beitar Ilit, Eretz Yisroel. Following the passing of Mrs. Holtzman in 5767, Rabbi Holtzman moved to Crown Heights to live near his children.

Rabbi Holtzman recently visited Buffalo, where his son Rabbi Meshulem Holtzman lives. On Thursday, he was on a farm in the Village of Wyoming, around 50 miles east of Buffalo, to give a hechsher on the milk, when a truck in the barn fatally struck him.

The levaya will leave from New York and the kevura will take place in Eretz Yisroel.