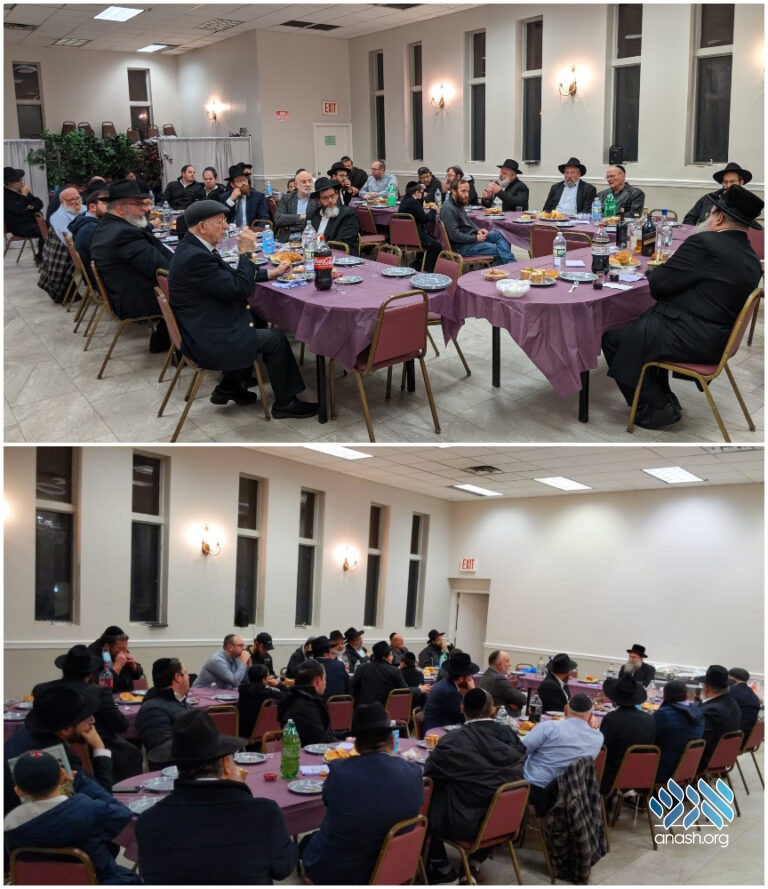 Monday Night, Yud Tes Kislev, the annual Chabad of Far Rockaway Farbrengen commemorating the hilula of the Maggid of Mezritch and the liberation from czarist imprisonment of his student, the Alter Rebbe, took place at Beis Medrash Ateres Yisroel.

The evening began with introductory remarks by Rabbi Pesach Schmerling, and lively singing of the niggun on the verses “pada b’shalom nafshi” (Tehillim 55:19) amongst other niggunim.

The crowd was then inspired by the warm words of hisorerus delivered by guest speaker Rabbi Nachman Yosef Twersky shlita. Rabbi Twersky (son of previous Rachmastrivker Rebbe of Yerushalayim zt”l, and brother of the current Rachmastrivker Rebbe of Yerusholayim shlita), is a  maggid shiur for over four decades at Yeshivas Oholei Torah in Crown Heights.

Rabbi Twersky focused on the words of the Rebbe Rashab zt”l, the fifth Rebbe of Chabad, that on Yud Tes Kislev we were endowed – via the teachings of Chassidus – with illumination and liveliness for our souls. He explained from Tanya as well as teachings of Rabbi Twersky’s ancestor, Rebbe Nochum of Chernobyl zt”l (student of the Baal Shem Tov) in his famous work Meor Einayim, along with inspiring anecdotes and stories, how a Jew unites with Hashem when learning Torah, and how with that illuminated view on Torah learning, a much greater and essential life force is brought to the fore, enabling us to serve Hashem with strength of unshakable fortitude.

The crowd enjoyed the divrei hisorerus for over three hours interspersed with uplifting Chassidic niggunim.

The many participants left inspired and uplifted with renewed vigor in serving Hashem, and in learning the teachings of Chassidus.