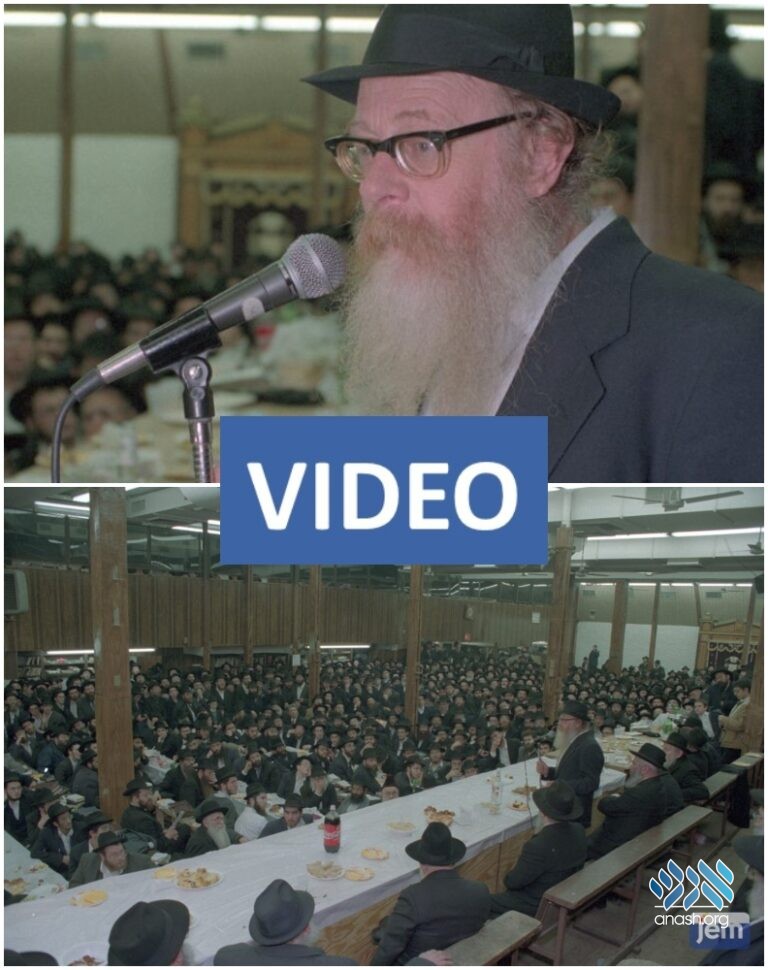 At a farbrengen in 770 on 9 Shevat, 5750, celebrating 40 years of the Rebbe’s leadership, Rabbi Adin Even-Israel (Steinsaltz) spoke in his typical say-it-as-it-is manner, making for a farbrengen that would be long remembered. Exclusive: Full English Translation.

The world knows Rabbi Steinsaltz as a towering Torah scholar. The Lubavitch community, however, was also privy to another endearing trait of personality: The straight talking, straight shooting, say-it-as-it-is analyst.

At this memorable Farbrengen of Chasidim on 9 Shevat, 5750, Rabbi Steinsaltz took the students at 770 to task for not approaching their studies and their work with the urgency expected of a young Chasid.

“The Rebbe doesn’t sleep at night,” he said. “Do you know why? Because the Chasidim are sleeping too much!”

Anash.org Exclusive: Full translation of the farbrengen to English below.

Rabosai, I don’t know in which language to speak, and since either way no one listens to what is being spoken, it makes no difference in which language I speak. The main thing is the message, and I hope the message will be delivered even to those that don’t understand the language. Not to compare myself to the Rebbe, but just like when hearing the Rebbe talk, no one is really listening, but the message is taken. So, let’s say that I can talk like that as well.

But I don’t want to talk long; you already heard plenty speeches and heard toros. I’m not a speaker and won’t become a speaker. But I want to tell something of a farbrengen.

I’m unfortunately not from the elder chassidim, but I’m old enough to remember a time when at a farbrengen people didn’t flatter themselves. People are sitting here, thank G-d a big crowd, very nice, many people are sitting, others are standing, and it’s a pleasure to see. Naturally, when you see so many people, fine Jews, gathered here late at night, they will flatter each other. They flatters themselves, flatters others, as being fine Yidden, chassidishe Yidden, a “rav harashi” [chief rabbi], “harav hatzadik,” “harav hagaon,” thank G-d. And so, everyone, and of course myself included, feels good about themselves.

This is a custom, an American custom, that everyone flatters each other and everyone feels good about it.

I was taught that at a farbrengen, which is a heimishe thing, there’s no need to flatter one another. Of course, one mustn’t harass or hurt someone. But when you want to accomplish something at a farbrengen, you need to be like a doctor, who cuts so that something good should result.

As I said, I am not a speaker, so I will just share a few words in the farbrengen spirit.

It’s great to sit here and sing “ashreinu ma tov chelkeinu” and feel good and drink some mashke to uplift ourselves. I would like mention a few basic points about where the Rebbe is holding with his work.

Take a look, standing here, BH, is a large crowd. I remember, twenty years ago, when I came for the first time, there wasn’t such a big crowd, nothing to compare. This is indeed a source of encouragement  for us. But still, we must recognize one thing: those standing here are almost all members of anash.

If there is something bothering the Rebbe, it is this: Every second we are losing Yidden. We don’t see them, but they exist. We are sitting here, BH, fine Yidden with yarmulkes, beards and peyos. Where are all the Yidden who aren’t here? It doesn’t let the Rebbe rest!

In the span of forty years, the Rebbe accomplished great things. It has been spoken about and written about. The Rebbe’s accomplishments were almost like “yesh meiayin,” something from nothing. When the Rebbe first started, everything was small and now the crowd has grown. But that isn’t enough. The Rebbe can’t sleep at night, not because someone isn’t letting him sleep, but because the reality is of such that doesn’t allow him to sleep.

In these forty years [of the Rebbe’s nesius], there should’ve been such a great change, the world should’ve been transformed. We see now how the world can turn over within a year or two. An entire country turns over in such a short amount of time. And here we’re sitting, we do, talk and talk some more. I don’t want to criticize, and I can’t criticize because I take a look at myself… But I’m just bringing out this point.

There hasn’t been a person, not in this generation and not in the past few generations – and I don’t mean to put anyone down – who was fit to be a leader of all Yidden, based on his own qualities and who he is, in a way that he is truthfully being led by above, as the Rebbe.

In the last generations, there hasn’t been anyone like the Rebbe who has all the qualities to be a leader of all Yidden, not just for chassidim or a certain group. Someone who has a view of the whole world and can understand every person from the lowest to the greatest. A person who understands the higher worlds and the lowest of the lower worlds. There hasn’t been such a person in our generations. A person with this magnitude and with the energy that he has, simply hasn’t existed.

But how does he work? We are the tools for the Rebbe to carry out his work – his fingers. And if someone has his fingers cut off, if he doesn’t have hands or feet, how can he possibly accomplish what he needs to accomplish?

So, it’s been forty years. As much as there is a nachas that the crowd is growing, but the pain must also be noticed. Forty years have passed, and the world hasn’t been completely changed. According to the Rebbe’s greatness, the world should’ve been totally changed by now. (The change should match his greatness). And if the world hasn’t completely changed, then it’s our lacking, that we aren’t working hard enough. We’re relaxed and calm, and we’re not working as we should be.

I’m not going to point fingers and say that this and this person is at fault. I am at fault. I know I don’t work enough; I sleep too much, and I don’t work as much as I should on my own projects and on the projects of others. I just want to rouse you and point out that the world hasn’t been completely changed.

We make a parade – very nice. We’ll probably make one tomorrow [Yud Shvat] as well. We’ll drive around, there will be nachas, journalists will take pictures and so-and-so will give a speech. But is that it?

I will use some words that some people here understand. The Rebbe wanted that we should make a revolution and we are just kratzing, dallying, in trivial things. Everybody kratzes with his own kratzerei. One person is busy learning, another is davening, this one is a rosh yeshiva, this ones is a rosh hakolel, this one is a talmid chacham and this one is stam a chossid who kratzes in the mikva. With such type of “work”, can anything actually be accomplished? We’re talking about a revolution!

Forty years have passed, and the broader world has changed so much in so many ways that it is unrecognizable. People often don’t realize how the world has totally changed. But by Yidden nothing has changed. We’re still arguing about the old foolish stuff, we remind ourselves of one foolishness or another. And we are at fault.

I’m not saying that we should bang al cheit now. Now is not the time for that. I’m saying that this is the type of thing that should be said at a farbrengen. Not to write on a chart that you’re taking a hachlata that you hold that the Rebbe is a great man, and then you go to sleep…

We need to know what’s demanded of us, not the small, minor things. The great things. That the world should change.

Instead, we’re busy here with trivial matters. A l’chaim here, a l’chaim there. A l’chaim isn’t hurting anyone, on the contrary, go say l’chaim, but something has got to change. As long as there’s no change, as long as this shul here can still hold all its visitors, it’s not enough.

These forty years that the Rebbe worked should have an effect. The Rebbe spoke recently about making a new reality, changing the world. One person might not be able to change the whole world, so each person should change over a small area. Start with one land, one city, or just one home, but turn it over, change it completely.

The parsha speaks about Tzivos Hashem, the army of Hashem. He considers himself a soldier, but wakes up ten o’clock, and then wanders about half a day, doesn’t daven properly, doesn’t learn properly and then when it comes to actually doing something, he has various excuses. And these are called soldiers?! Imagine a general with such an army, what appearance would such a general have?

Trotzky, lehavdil, had an army. They went with ripped shoes, ripped boots, and yet they won over the enemy. And here people are sitting with good boots, shoes, and pants and nothing’s doing…

After I’m done, someone will probably get up and speak about how you are all great people. I’m sure that everyone here are great people, sweet people, warm people. Every one of you is a pearl. And like my mashpia once told me, “You could’ve been a lot worse…”

But is this praise? Is this what needs to be done? There must truly be a change. What we are doing is not enough; it’s not even half or a quarter. We must truly start working.

What have we accomplished in these forty years? We should not compare it to the beginning [of the nesius] when there wasn’t much, rather we must look at how much work is left to be done. And compared to what still needs to be done, almost nothing was done in the last forty years.

I want to tell you one thing, and I know a little in this subject:

With all the baalei teshuvos, with all the awakening, for every Yid that becomes a baal teshuva, there are two who are assimilating further, whom we don’t know. This is what the world is like today, and we need to do something about it. We need to do something to create a change in the world. We shouldn’t be busy playing with trivial matters. We should start thinking about big things, about the entire world, about the Jewish nation, about what does the concept of Moshiach mean, that the world should be a new world, a new reality. This is what the Rebbe wants and this is what the Rebbe speaks and screams about.

So, let someone criticize you and then later someone will flatter you and tell you that you’re great people and it’s a chag and a joy and a yom tov. But meanwhile there should be a feeling that one should go out and feel that forty years have passed and what needs to be accomplished. And this shouldn’t allow anyone to sleep at night, because everyone will be aware that there is a world that needs to be conquered and this that was accomplished is nothing and we have start anew.