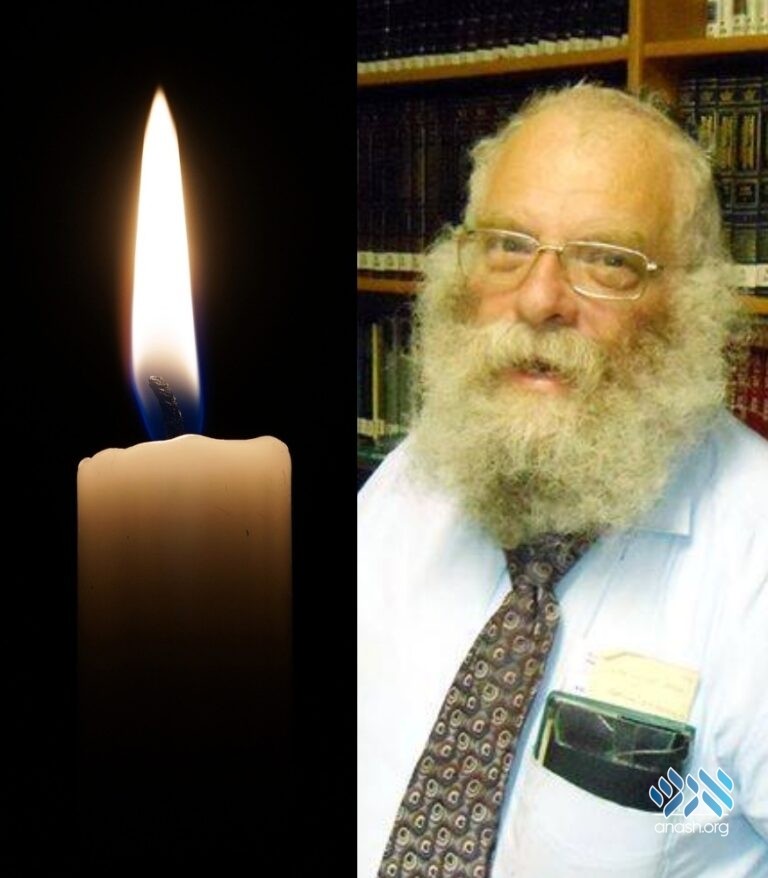 Rabbi Shmuel Rodal, longtime shliach and educator in Milan, Italy, who helped ensure the integrity of Calabria esrogim, passed away on Sukkos as tens of thousands around the globe use those very esrogim.

Rabbi Shmuel Rodal, longtime shliach in Milan, Italy, who helped ensure the integrity of Calabria esrogim passed away on Sukkos as tens of thousands around the globe use those very esrogim.

Shmuel was born in Montreal to Rabbi Yosef and Faige Rodal, where his parents were prominent members of the Chabad community. His father arrived in Montreal as part of the group of 9 bochurim sent by the Frierdiker Rebbe to establish a Yeshiva Tomchei Tmimim in the city, and later served as the principal of the Yeshiva’s school for a number of years.

In Tammuz 5728, he married Devora Munitz and the two settled in Crown Heights for the time being, where Rabbi Rodal studied in Kollel. When his wife was expecting and had to stop working, they asked the Rebbe permission for Rabbi Rodal to continue learning in Kollel while looking for an afternoon job, and the Rebbe gave his permission.

With the help of Harav Zalman Shimon Dvorkin, he found a job as a teacher of the fourth grade class in the Yeshiva of Central Queens, which was considered a hard class and whose previous teacher had quit in middle of the year. Yet, despite the challenge, and despite his young age, Rabbi Rodal was successful, and for the next year he was assigned a higher class.

After the birth of their daughter, the Rodals decided to begin looking for shlichus. Seeing his success in chinuch, Rabbi Rodal wanted to continue in that field, and received a positive answer from the Rebbe, who referred him to Merkos L’Inyonei Chinuch. Within a short time, he had eight possible options in the United States and Europe.

Before he had a chance to write to the Rebbe about the offers, Rabbi Rodal met Rabbi Gershon Mendel Garelik, who was serving as a shliach and rov in Milan, Italy, who offered him a position as well. Rabbi Rodal indicated that he did not consider Milan to be an option, but Rabbi Garelik pressured him to include it in the list of options he sent to the Rebbe.

“Since he was nudging me, I agreed to write Milan as the last place on my list. With each offer I wrote the pros and cons, the terms and the distances. As far as Milan, I wrote that I was including it because Rabbi Garelik asked me to but we were not thinking along those lines at all, and I gave the reasons why it was unsuitable,” Rabbi Rodal recalled in an interview.

When the Rodals entered yechidus, the Rebbe read their letter and chose Milan as the location for them to travel to. “As far as all your doubts about Milan, the eitza is to write a contract – not only the rav should sign it, but at least two important balabatim from the community – and write everything out in detail,” the Rebbe told them.

The Rebbe then looked at Mrs. Rodal and said, “There are many young couples there so you can make friends.”

Shocked both with the Rebbe’s choice and the wonderful brachos the Rebbe gave them, the couple returned to Rabbi Garelik and told him that the Rebbe chose Milan, but instructed them to have a detailed contract. Before signing the contract, the Rebbe’s secretariat asked for the contract to be submitted for the Rebbe to review, and the Rebbe suggested a number of changes. One was that the contract should include a clause stating that if either of the sides was not satisfied by the other, the mosad had to pay for us to move all our things back to New York. The Rebbe also directed that the contract should say that the mosad should pay for occasional trips to visit our family.

The Rodals moved to Milan at the beginning of the next year, and Rabbi Rodal began teaching in the local school which at the time only had 25 students. Among his students were Rabbi Levi Garelik, now of Crown Heights and Rabbi Berel Lazar, currently the Chief Rabbi of Russia.

At a certain point, Rabbi Rodal asked the Rebbe for permission to return to New York, writing that he was
wasting his time teaching four or five students when I could be teaching dozens. The Rebbe instructed him to remain in Milan, writing that generally, an important person is involved in important things and a simpler person is involved in more simple things. But when there are neither more important nor simpler people, then even the most important person can find himself teaching a little boy the Alef-Beis.

Some time later, after learning Italian and settling into his teaching position, Rabbi Rodal began getting involved in spreading Yiddishkeit and Chassidus to the local Jews. He began publishing a weekly Jewish publication in Italian, the county’s only such publication, and began giving shiurim in Chassidus to the young members of the Jewish community. He later began serving as the rabbi of Beth Shlomo Shul in the prime tourist area of Milan.

During his decades in Milan, Rabbi Rodal reached countless Yidden, both local and tourists, inspiring many of them to transform their lives by increasing in their mitzva observance or even becoming full-fledged ba’alei tshuva.

Rabbi Rodal also served as one of the head of the team that oversaw the harvesting of the Calabria esrogim, which Chabad chassidim and many others are particular to use for the mitzvah of daled minim on Sukkos. Together with Rabbi Moshe Lazar, he ensured the integrity and kashrus of the esrogim.

He was predeceased by his daughter Reizel Rodal a”h.

The levaya will pass past Beit Chabad of Milan on Wednesday, Isru Chag, at 8:45am and continue on in Yerusalayim on Thursday at the Shamgar funeral home. The kevura will be on Har Hazeisim.