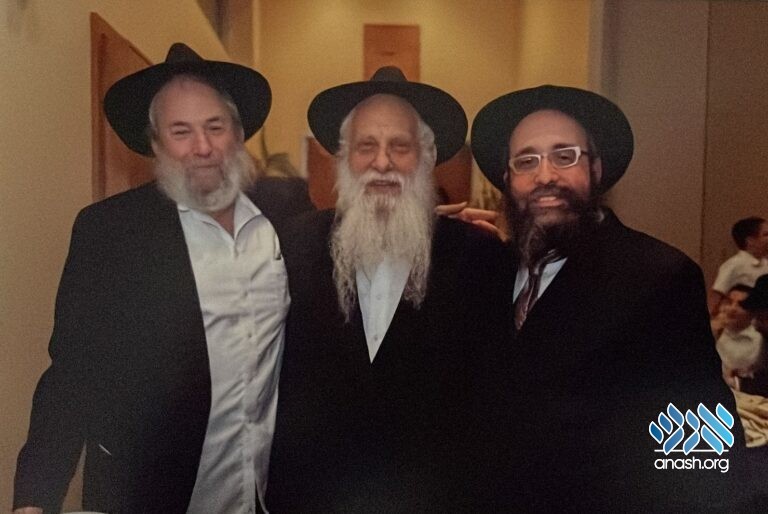 “He always talked about his father and the great Chassidim he grew up with, and yet without realizing it, he surpassed and ascended higher than them all.” Rabbi Moshe Levin pens a tribute to his mentor and friend.

It’s Shabbos, just before Musaf at the world-famous Levi Yitzchak shul in Los Angeles, and Rabbi Shimon Raichik is about to begin his sermon.

There is emotion and vigor in his voice; he launches into a talk of the Rebbe that he heard forty years before, and for those listening, you feel like you are there with him.

Several times in the middle of his sermon, he pauses and closes his eyes, sometimes tapping on his lectern. You can tell that he is reliving a Farbrengen of the Rebbe as if it’s happening today, and it is.

He pauses and asks a question, he comes back with the answer and then he stops again.

His tone changed and he looked at me and everyone present in the room.

I feel he is talking directly to me, and about “my now”. It hits me, what a gift! Who is like this man? Who can do this?

He concludes his speech, I walk over, and say, “Yasher Koach… Thank you!” He responds with a twinkle in his eye and a shy smile, “Vus iz?” “What about it?” (I heard him talk dozens of times, and I have seen many people thank him, and I don’t remember him responding any other way). What I think he means is, ‘What did you receive?’ Did I talk to you and reach your neshama? Did we connect? really? Wow!

He never understood his appeal. Truly great people can’t. Maybe it would stop them from being great if they knew.

He once wrote to the Rebbe about his failures. “I am doing A, B, and C and it’s all worth nothing.”

And the Rebbe responded (content), “I got the letter full of good news but I don’t understand why you are upset?”

When he led Farbrengens he always talked about his father and the great Chassidim he grew up with, and yet without realizing it, he surpassed and ascended higher than them all.

There was a comment he would often make when you asked him a question: “What do you want I should do?” At first I and many others didn’t understand his response. “We are asking you what we need to do, what are you asking me?”

Sometimes what he meant was “boy I wish I could make your life easier and tell you what you want to do is okay but I don’t know how it can be okay.”

Sometimes he meant “that’s a great question, but how can I possibly figure that one out? Who am I?”

Sometimes it was just a way of saying “Are you sure you want to do this? Isn’t there a better way?”

Some rabbis know the books and not the people.

Some rabbis know the people and not the books.

And then you have Rabbi Raichik.

He doesn’t ONLY know the books… yes he knew and taught halacha and Chassidus, he wrote extensively on halacha, minhag, history and hashkafa, he learned it all and loved it like nothing else. (He once shared with me how because of a certain circumstance, he has more time to learn.)

He had a brilliant glowing smile when he said “Men ken lernen un lernen!” (I can learn and learn…)

But you don’t call him specifically because he knows the books, I didn’t. I called him (all the time, for any number of matters, from the most trivial to serious life and death issues, as all who knew him did) for a different aspect. He’s one of those few who knows the Author of the Torah, he reaches up and he feels the Author and he reaches down to where you are and he feels where you are. And he brings it down.

A few weeks ago, a drug addict agreed to go to a rehab in Palm Springs right before Shabbos, but only if I took him. It would mean spending Shabbos away from my family and community and changing a million plans, was this my Mitzvah? Couldn’t someone else take him? Is someone’s life at stake?

It’s not a question you learn in Yeshiva and I need to call Rabbi Raichik.

I remember the first time I saw him after moving to Los Angeles, it was before Chanuka. I asked him about the preferred height of a menorah.

He took a look at me and said, “how am I supposed to know how big the menorah is that your wife just bought you?”

Good question. How did you know, Rabbi Raichik? But know he did.

He does this. Years ago, I was staying at someone’s home out of town, and he called their home to speak to me. The one who answered the phone was a bit under the weather.

But not Rabbi Raichik.

He called back again and again for the next two days (long after I had left their home) to see how they were doing. This person was floored, “now this is a rabbi!” I found out about this and I asked him why he called back so many times, he couldn’t understand the big deal.

“Did you hear how she sounded? Oy!”

Los Angeles is a big city, yet he was a small town Rav. And not only for this city. A Rav who knows and cares for each man, woman, and child.

Have you noticed that when he gives his blessings at the end of his drasha, he closes his eyes and opens his warm loving, and kindest heart wide and asks for “our families and children…”? He does that. He does that because that’s what he cares about.

But he’ll never get it.

As he enters Gan Eden, the parade of thousands of neshamos he taught, uplifted, and cared for, together with the millions of malachim created by his Torah study, his prayers, and his kindness, all come to greet him. But he? He looks behind himself to see who the parade is for.

And when he discovers that it’s for him?

Any second, as the Rebbe said so very clearly and so very many times, we expect to see you with Moshiach, and your central role of making it all happen will be obvious, men vet zen vus iz!