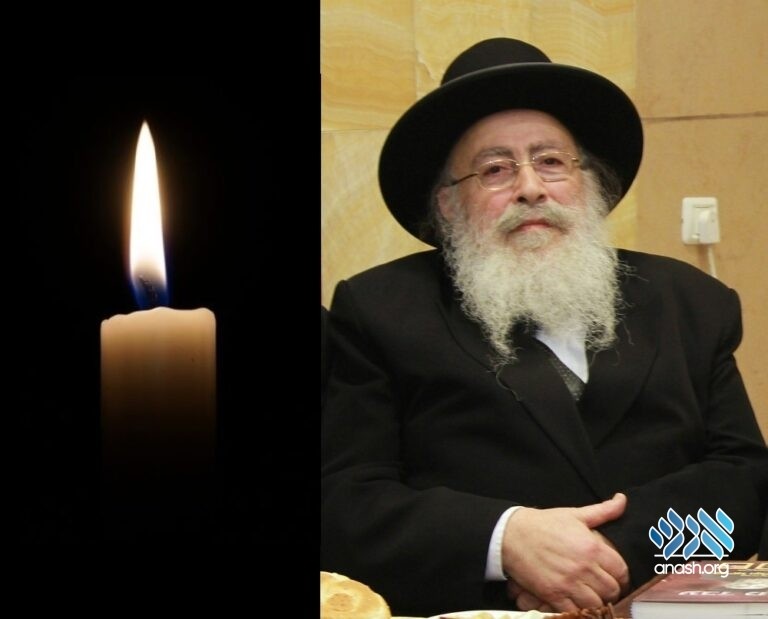 Rabbi Shimon Elituv, rov of Mateh Binyamin Regional Council and one of the senior Chabad Rabbonim in Eretz Yisrael, passed away on Wednesday, 3 Shevat, 5783.

Rabbi Shimon Elituv, rov of Mateh Binyamin Regional Council and one of the senior Chabad Rabbonim in Eretz Yisrael, passed away on Wednesday, 3 Shevat, 5783.

Rabbi Elituv served on the Chief Rabbinate Council, rabbi of the Mevasseret Zion community, and member of the Presidium Council of the Alliance of Rabbis in Islamic States. He also served for ten years as rabbi of the Syrian Community in Buenos Aires, Argentina.

In an interview with JEM’s My Encounter project, Rabbi Elituv shared details of his unique relationship with the Rebbe:

My father, Rabbi Yosef Rachamim, immigrated to Israel from Morocco in the year 1911, settling in the Old City of Jerusalem, where I was born in 1937. Despite the great poverty and the difficult security situation at the time, my parents insisted that my brothers and I devote ourselves to the study of Torah. I was sent to the Novardok yeshivah in Hadera, where I remained for five years, until 1952, when my brother Meir influenced me to transfer to the Chabad yeshivah in Lod.

I was received warmly at the Chabad yeshivah, even though I had come from a very different background than most of the other students. They were primarily the sons of Chabad families from Russia, while I had come from a Sephardic family with roots in Morocco, and then had studied in a Lithuanian yeshivah, which was generally opposed to chasidic ways. Those who came from the Lithuanian yeshivah background questioned how could a fifteen-year-old boy like me delve into the deep chasidic teachings which are steeped in Kabbalah. Their questions disturbed me, but when I asked my teachers, they advised that it would be best if I wrote to the Rebbe about this.

And thus began my extensive correspondence with the Rebbe. This was just a few years after the Rebbe began his leadership of Chabad, and he used to answer all my letters at length.

But even later on, when he became very busy, the Rebbe always noticed if a long time passed between my letters to him. In subsequent years, there was a period that I didn’t receive any reply from him so, in order not to burden him, I decided to stop writing. Therefore, I was astonished to receive a letter from him with a postscript in his own handwriting: “Your silence … is surprising, and it saddens me that you are making a calculation – based on the lack of letters from here – that I am loaded with burdens and troubles, etc.”

I realized then that the Rebbe paid careful attention to every letter he received even if he didn’t have the time to respond personally to each one as in years past. So I continued to write to him and to report on my activities.

During the six years I learned in the Chabad yeshivah, I got involved in various educational programs for local youth outside the hours of formal study. Once a photographer came and took a picture of us, and I included this picture with one of the letters I sent to the Rebbe, who wrote back: “I was pleased to see the photograph, especially since it strengthened my opinion that if you will want to devote your energy to the field of education, you will succeed.” I drew great encouragement from this response, and it caused me to dedicate whatever talents I had in the direction of Jewish education.

When I reached marriageable age and got engaged, the joy that my parents felt was severely dampened by their inability to make a nice wedding for me. With seven children and a small income, how could they help me set up a home, furnish it and pay for the wedding expenses as well. So, on her own initiative, my mother decided to write to the Rebbe about this situation. The Rebbe took the matter into his own hands and the result was that the yeshivah gave my mother the money to buy furniture for us, and a wealthy South African donor contributed one-thousand dollars to pay for our wedding.

In the first years of our marriage, my wife and I were busy teaching – first in Kiryat Gat and then in the desert settlement of Brosh, as part of Chabad’s Oholei Yosef Yitzchak network. Later, due to financial pressure, I learned to be a kosher shochet and traveled in this capacity to Yugoslavia, Romania and Argentina.

While in Argentina, I also directed a teacher’s seminary and gave Torah classes to the Sephardic community in Buenos Aires. After a time, I was appointed the rabbi of the Sukkat David synagogue, which had a membership primarily of Jews from Syria. I led a building campaign to erect a large and dignified shul, which today is among the most popular in the city.

In 1974, I came to New York and was privileged to meet the Rebbe in person. The private audience lasted only about fifteen minutes, but it was an experience of a lifetime. I entered with trepidation, which melted when the Rebbe greeted me with a kind-hearted smile. He spoke about the simple faith that Sephardic Jews have, and he urged me to use the great respect they feel towards rabbis to strengthen them in areas of religion where they might have weakened. He noted that they are still strong in keeping kosher and in synagogue attendance on Shabbat and holidays, but needed encouragement to keep the laws of family purity and to improve their Torah education. The Rebbe also spoke about the need to work with vigor to draw the young generation to participate in weekday prayers, so they could take the place of the dwindling older generation.

Since I have a talent for languages, the Rebbe urged me to use it to spread Judaism. Many of Argentina’s Sephardic Jews spoke Arabic, a language that I had learned at home. At the same time, the Rebbe suggested that I should write a weekly column in Argentina’s popular Yiddish newspaper, a language which I learned during my years of study in the yeshivah in Lod. When I returned to Buenos Aires, I found out that there was also a Jewish radio station in the city that broadcast programs in the various languages that were spoken in the community and, following the Rebbe’s advice, I gave Torah classes in Spanish, Arabic and Yiddish, using this venue.

I also traveled all over the country, speaking before different audiences, and I published informative materials on various topics. These initiatives bore fruit, and many homes were strengthened in their Judaism as a result of the awakening that the Rebbe caused in me during those years. With his guidance, I succeeded in influencing many women to keep the laws of family purity, and I convinced a number of families to move their children to religious schools, thus preventing their assimilation.

All this activity involved much effort, but I felt that the Rebbe’s blessing gave me the strength beyond normal human limits. Also, he continued to encourage me and demand more of me. During this period, every letter of mine got an immediate response from the Rebbe, with specific guidance for my activities.

As our children grew, my wife and I were forced to send them to Israel for education which was lacking in Argentina. Being so far from them was very hard on my wife, who wrote about it to the Rebbe. He told me, “Do as your wife desires” and, after ten years, we returned to Israel, where I’ve continued to teach Torah and to work in Jewish education.

I feel that, throughout the years, the Rebbe showered me with tremendous fatherly love, and that he gave me great strength. I do believe that now, just as then, the Rebbe is still connected with his chasidim, and he gives us strength to hasten the coming of the Final Redemption. May it come speedily in our days, Amen.

The levaya will take place on Wednesday in Yerushalayim with burial on Har Hamemuchos.