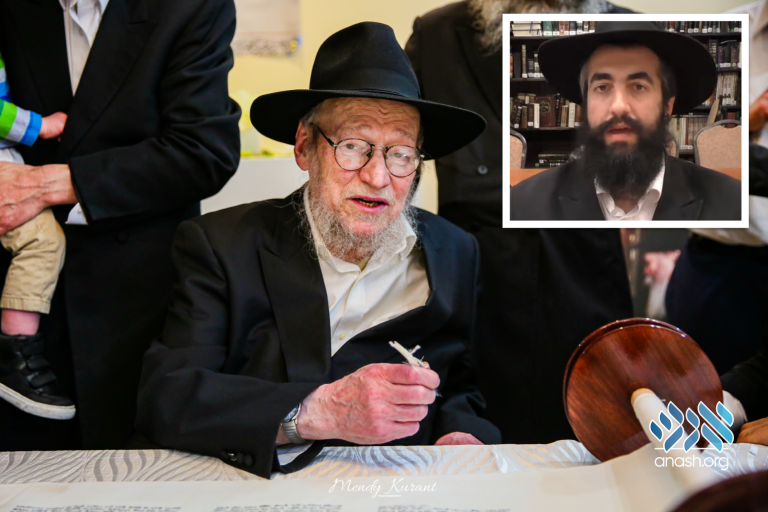 By Rabbi Michoel Lerner for Anash.org

With the recent petirah of Harav Yankel Schwei, Rov of Crown Heights, I would like to share some zichronos and personal interactions with him. While many will perhaps focus on his learning and style of psak, I would like to shed some light on other aspects of his personality.

My first close interaction with Rav Schwei was when I studied for a year in the Chovevei Torah zal, in the year of 5759 (1998). He was then serving as a mashgiach for the afternoon seder and his job was to ensure the bochurim came on time and learned diligently.

As bochurim, we felt that Rabbi Schwei really cared for us. He encouraged us to learn, not by means of his authority, rather by softly prodding us along. He would give us a smile and a chassidishe vort. When he felt we weren’t learning, he clearly took it to heart. It was clear he was not there just for the parnassah – he truly cared.

To be honest, he wasn’t the tough style mashgiach. One could get away with many things, under his watch. He did not rule with the iron fist. He was eidel. Very eidel, like the posuk says “not with valiance, nor strength, rather with his spirit.”

One episode of that year stands out in my memory. It was Sunday of the Kinus Hashluchim, and the banquet was going to held at a large hotel in Brooklyn. No bochurim even thought of going to the Kinus at that time. R’ Yisroel Heller, the well-know mohel, was then a maishiv in the yeshiva. I realized that he was planning on attending the Kinus, and escorting a philanthropist who would be picking him up soon.

I immediately went to our mashgiach, Rabbi Schwei, to ask reshus to attend. Understandably, he was not keen on giving permission. However, when he saw I was excited about the idea, he asked me if this would give me a chayus in the Rebbe’s shlichus ideals. When I responded in the positive, he gave me reshus and I ran out to chap a ride in the philanthropist’s car.

Once in a while, Rabbi Schwei would farbreng with us and it was always practical. He did not discuss lofty levels of avodas Hashem and hiskashrus, as others would perhaps do. He would dwell on the ‘simple’ matters. He would encourage us to daven appropriately, not to talk during davening. He would point out particular dinim he felt we were not careful enough with. He would do this gently, by sharing stories of eltere chassidim and using various mesholim. There was no fire and brimstone. It was just an eidele chassidishe yid, caring for his talmidim. His ahavah for us was apparent, and no one was offended.

Years later, I was sent with a chaver, to arrange the Pesach sedorim in Narva, Estonia. When Rabbi Schwei heard, he was very excited. His father, R’ Mordechai Eliyahu, had served as a Rov there. When we came back, he could not get over his excitement, he wanted a full report. Of particular interest to him, was the state of the Beis Hachayim there – it could be he had family there.

In recent years, I would often daven at the same shul, as Rabbi Schwei did. Although he would not usually daven b’avodah, he would daven slowly, with a quiet chayus. By the time, he took off his tallis and tefillin, most people had already left the shul. Up until recently, even when he was quite weak, he was careful to stand during chazaras hashatz, and to follow along with the chazan inside the siddur, word by word.

As a true chassidishe yid, Rabbi Schwei did not follow the news. Not even the Yiddishe news. It seemed at times that the extent of his knowledge of the news was limited to what he had overheard from the baleh batim’s discussions in shul, while wrapping up their tallis and tefillin. It was not a field he was interested in.

One episode really brings it out. I once approached him after davening, to discuss a certain halacha with him. In the course of the discussion, I mentioned the opinion of a certain Litvishe talmid chacham, who was a very famous individual. His picture graces the front covers of all the heimishe newspapers and magazines, but Rabbi Schwei had never heard of this person! I was in a state of shock -how could he never have heard of him?

Later, I confided to another rov what had occurred. At first, he too was amazed, and he then explained that Rabbi Schwei was the quintessential chassidishe yid – all he knew was the “Eibershter un Lubavitch”.

Besides for Rabbi Schwei’s eidelkeit, ahavas Yisroel and yiras shamayim, there was his middah of emes. He was very sincere and truthful, as far from bluff as east is from west.

Rabbi Schwei was a remnant of the eltere Russian chassidim. Honor and money did not mean anything to him, literally. They played absolutely no role. He did not view community decisions as “politics”, rather as the opinion of Torah and Chassidus. Even those who, on occasion, disagreed with his opinion, recognized that Rabbi Schwei meant his opinion with deep sincerity and they respected him for that.

Rabbi Aaron Yaakov (ben R’ Mordechai Eliyahu) A”H Schwei will be sorely missed. May his pure neshama have an aliyah and may his memory be an inspiration to all.

Your memories are precious and so meaningful to the family! Please send to rabbischweimemories@gmail.com or WhatsApp 917 698 8104.

To honor Harav Schwei, please help the families who depended on him for financial support Charidy.com/rabbischwei