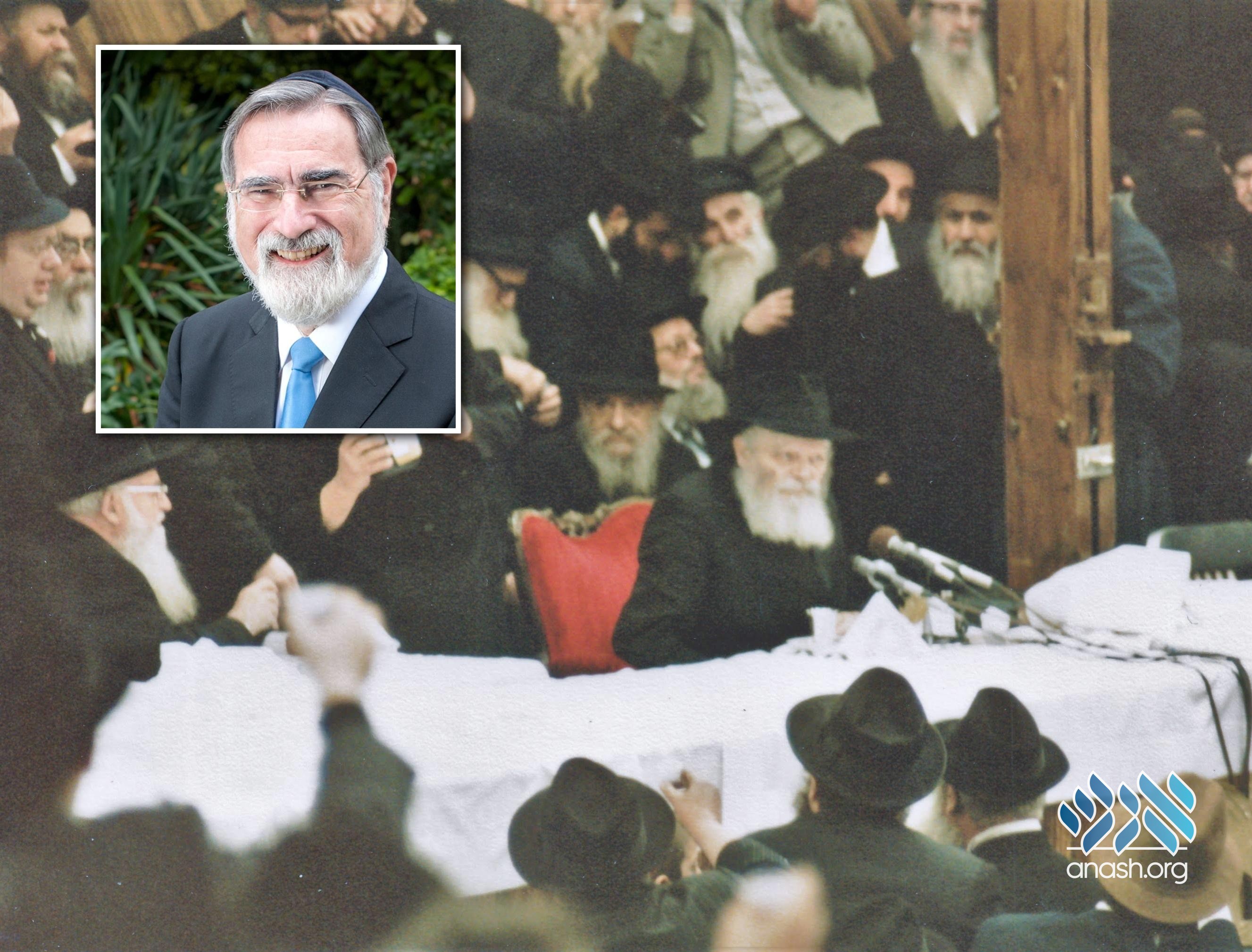 Rabbi Lord Jonathan Sacks who recently passed away had a unique decades-long connection with the Rebbe. In 1980, he wrote his first tribute to the Rebbe in honor of the 30-year anniversary of the Rebbe’s leadership.

Rabbi Lord Jonathan Sacks, former Chief Rabbi of Great Britain and noted Jewish philosopher, orator and author whose extensive works of Torah scholarship and moral philosophy inspired and influenced individuals and communities around the world, passed away on Shabbos, 20 Cheshvan.

Rabbi Sacks had a unique decades-long relationship with the Rebbe, who he credited with setting him on the path to the rabbinate. Over the years, Rabbi Sacks wrote tens of articles about the Rebbe, and even went on to write a full book based on the Rebbe’s teachings.

The first such article was published in 1980, to mark the thirty-year anniversary of the Rebbe’s leadership. In the article, he gives a window into the world of Lubavitch Chassidim and explains the concept of a “Rebbe’ in clear and coherent fashion.

Who is the Lubavitcher Rebbe? We now mark the anniversary of the passing of the previous Rebbe of Lubavitch, Rabbi Yosef Yitzchak Schneersohn, and with it 30 years of leadership under the seventh and present Rebbe, Rabhi Menachem Mendel Schneerson.

In that time, Lubavitch has grown to be a worldwide presence, a household name. In all its varied activities is stamped the vision of one man: the Rebbe, Ant yet his pery remains curiously opaque, overlaid with legend.

How has one man inspired so much devotion, generated so much energy, created such a network of dedication? Who is the Lubavitcher Rebbe?

The word Lubavitch triggers off many associations. Tefillin-laying with passing Jews in metropolitan streets. Mitzvah campaigns from New York to the soldiers in Sinai. Smiling, bearded faces bringing Judaism to the Jews everyone else forgot.

And above all the Rebbe. Followers travel thousands of miles for a brief interview, a yechidut. His speeches are attended by a packed crowd of Hassidim who fill a basement that stretches almost half a block. They are relayed live by a communications nerve-center that links followers across the Jewish world with their leader in his unassuming headquarters in Eastern Parkway. Perhaps no other Jewish group is more closely or controversially identified with its leader.

A Prodigy in Jewish Studies

There is a story told about his early life that seems to be an omen, almost a symbol, of everything that was to follow.

When he was nine years old, the young Menachem Mendel Schneerson dived into the Black Sea to save the life of another boy who had fallen from the deck of a moored ship. That sense of other lives in danger seems to have dominated his consciousness ever since.

Rabbi Menachem Mendel Schneerson was born in 1902 in the Russian town of Nikolaev, and was early recognized as a prodigy in the field of Jewish studies.

The Rebbe has shown through a lifetime of teaching the intimate connections between the ‘revealed’ and ‘hidden’ Torah, between the practical rules of Jewish law and the truths of Jewish mysticism, or more correctly, of Hassidut.

Central to his approach ‘is the idea of the intellectual unity of all facets of the Torah. Legal, homiletical,. mystical and Hassidic expositions of a particular passage — though they may seem foreign to one another — are in fact not merely all true, but the same truth, expressed at deeper and deeper levels of perception. One can pursue an idea through literal, allegorical, homiletic, mystical and Hassidic frames of discourse, and in doing so one is bringing into play progressively deeper faculties of consciousness, arriving at deeper awareness of the Divine reality.

It is difficult to say, in Judaism, who is a revolutionary thinker. Essentially, every revolution is no more than the saying of ancient truths in a new way. But within these parameters; so different from those of science, the Rebbe is a revolutionary. He has enthroned Hassidut as not one of the limbs, bur as the heart of Judaism. He is a systematic and conceptual thinker on the largest scale, And, more than anything, he continually drives together the highest abstract truth and the most specific call for action, spanning the continuum of the whole range of Jewish study. It is perhaps the case that his fame as a leader, organizer and initiator of communal projects that has impeded a measured assessment of his originality as a thinker. But, essentially, the two facets of his work are one- the comprehensiveness of his thought and action are part of the same drive: the unity of the Torah, the unity of the Jewish people.

Many of the Rebbe’s achievements have shaped so deeply the development of post-war Judaism that we hardly think of then as Lubavitch at all. Fifteen years ago the term baal teshuva was almost confined to Habad, To other Jews, teshuva was some-thing you did on Yom Kippur, atoning for sins. In Lubavitch it meant a rescued soul, specifically those hundreds of students brought from drugs and alienation into deep Jewish commitment by the massive Habad involvement in campus life across the world. Today it is the word that describes the populations of dozens of yeshivot in Israel that have no connection with Hassidisin: it has become the leitmotif of a generation.

The Jewish day school movement, of which Lubavitch was one of the earliest pioneers, has displaced across a wide spectrum the once-prevalent ideology that Jewish education was a kind of dutiful appendage to the real business of acquiring a secular culture. The idea, in which Lubavitch was for so long alone, of resuscitating dying communities by sending out a small resident nucleus of religious families, has been widely copied by yeshivot in America, and is at last being tentatively taken up in Britain. The Rebbe has never had an interest in preserving a monopoly of his innovations. Every achievement means a new goal to be formulated. Results can never be quantified. It is sufficient to know that they are always never enough.

Most Restrained of Hassidim

Written into the relentless energy that the Rebbe demands of his Hassidim is the desire never to let a Jew be lost, or a mitzvah. They can not be quantified — a soul, an act — they cannot be dismissed. Why care? How can one be a Jew, he seems always to be saying, and not care?

We come then: finally to the great and controversial: Is there something suspect about the attachment of Lubavitch Hassidim to the Rebbe? Does it go too far? Is there an abdication of personal responsibility involved in bringing private questions to the scrutiny and advice of a great man? Ultimately — can there be a man worthy of such adulation?

In a way it is strange that these questions should have been levelled against Lubavitch, who have been from the very beginning the most restrained of all Hassidic groups in the powers they attributed to their Rebbes.

It is important to understand about Lubavitch that it is a movement supremely dedicated to allowing each Jew to play his special role, to being, in the Ba’al Shem Tov’s image, his own particular letter in the Sefer Torah. The Rebbe is the person who guides him towards that role: who by standing above the distortions of the ego, taking a global view of the problems of the Jewish world, being in the language of Hassidut a ‘collective soul,’ sees where the individual belongs. It is, after all, difficult to think of many other leaders who can assume this role, for they are for the most part leaders of a sectional group, without a brief and perhaps without the information to be authoritative beyond their borders. The Rebbe’s advice carries with it no more and no less than the authority which his worldwide concern has given him.

Those who visit the Rebbe — and the vast majority of those who do so are not born Lubavitchers, whose attachment might be denigrated as being a reflex of tradition do so because of his reputation as a man of encompassing vision. They tend to emerge somewhat unnerved, taken by surprise. They expect, perhaps, the conventional type of charismatic leader, imposing his presence by the force of his personality. What they find is the reverse: a man who, whatever the complexity of his current concerns, is totally engaged with the person he is speaking to. It is almost tike coming face to face with oneself for the first time.

His leadership — rare almost to the point of uniqueness in the present day — consists in self-effacement. Its power is precisely what it effaces itself towards — the sense of the irreplaceability of each Jew. And it communicates itself to his followers.

The world is full of Godliness, the Hassidim used to say. And we would see it if we only we opened our eyes, But one thing stands in the way, the Yesh, the sense of self. By bittul, losing that sense, the true reality emerges from behind the smokescreen of human convention, pessimism, self-inflicted limits, All the phenomena that we associate with Lubavitch — the joy, the disdain for convention, the energy, the rejection of the word ‘impossible’ — have this at their root. They have learned to see the world a different way. Through Jewish, de-Westernized eyes. Through the vision of the one man of whom no biography is possible, because he is not a personality at all in the usual sense, because he has merged his life with the community of all Jews. The Lubavitcher Rebbe.

Many thanks to Reb Menachem Butler of Cambridge, MA, for supplying Anash.org with a scan of the original article.