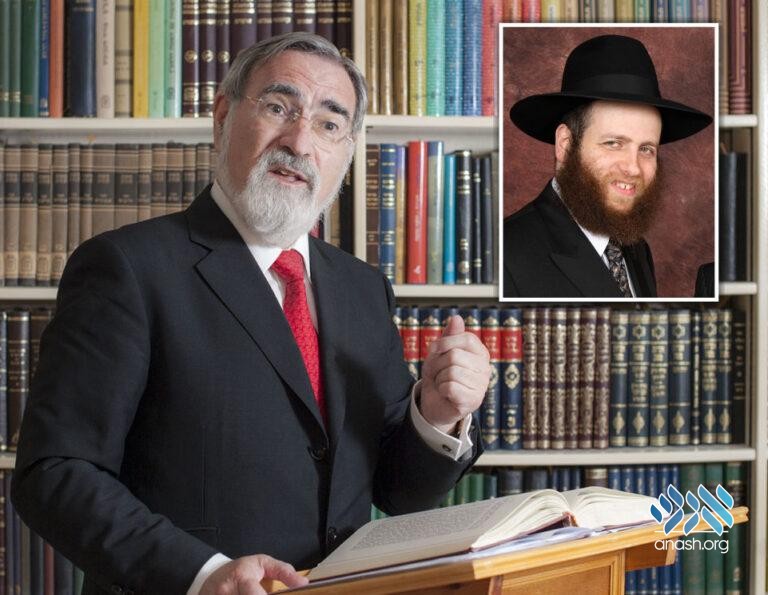 Rabbi Boruch Hertz, Rov of the Chicago Chabad community, recalls davening as a young boy in the same shul as Rabbi Lord Jonathan Sacks a”h, and two memories that stayed with him to this day.

By Rabbi Boruch Hertz for Anash.org

Several weeks ago, we mourned the loss of a great Jewish teacher and leader, a true giant: Rabbi Lord Jonathan Sacks. His passing takes me back to my youth, when I was the age of 7, 8, and 9 years old.

These were the years when our shul, the Kingsley Way Beis Medrash, had a very unique energy. The shul featured a mix of prominent businessmen, Chassidim dressed in kapotes, as well as people from the neighborhood enamored by the Chassidic excitement that the shul brought to Hampstead Garden Suburb. Everyone was an integral part of the farbrengens after davening.

One special family that stood out in the shul was the Sacks family, Rabbi Sacks’ father, Mr David Sacks, his brother and Rabbi Lord Sacks.

Rabbi Lord Sacks may not have been dressed in a long coat like some others, but the Chassidic fire burned in him no less.

Every Shabbos I’d see him with two things in his hand a Siddur and an additional sefer.

Every Friday night at Kingsley Way there would be two Chassidus classes. One, a more advanced class for those who had studied Chassidus in yeshiva, would be given by my father, may he be well, and the other was given by Rabbi Sacks for beginners – on the same topic but with a lot more explanations of the new concepts being discussed. Being a young child, I was not on the level of understanding even the beginners’ class, but I was old enough to see and realize the excitement in peoples’ eyes when any and every question posed to Rabbi Sacks was always answered with tremendous clarity and wisdom. As a child, those classes made an everlasting impression on me.

The second memory is, that after a few years in our shul, Rabbi Sacks achieved his first rabbinic position and was appointed to be the Rov of Golders Green synagogue. On Simchas Torah, hakafos would begin very late at Kingsley Way. Most of the mispallelim would first go out to other local shuls to assist them with the dancing at hakafos, and only then would they come back to Kingsley Way. Many neighborhood Jews came to our shul for hakafos, with the crowd swelling to the hundreds. The hakafos were lead by my father and our unforgettable gabbai Reb Efraim Hager, a”h.

One of the shuls we would visit was Rabbi Sacks’ shul. Despite the Synagogue being a “proper” English shul, Rabbi Sacks’ energy on Simchas Torah was something to behold!

I was a young child under the age of bar mitzvah, but a comment from Rabbi Berel Shur, a”h sticks in my mind: “Tonight, what we saw from Rabbi Sacks was Chabad energy!”

The family of Rabbi Sacks still continued to attend Kingsley away even after he held a position in another Shul.

Years later, when I was visiting Kingsley Way, Rabbi Sacks, by then Chief Rabbi, was in Shul that Shabbos. It was an occasional quiet week for him, which happened maybe once or twice a year, and he chose Kingsley Way shul as his escape. I was told that he checked before to make sure there was no Bar Mitzvah, so that his presence should not overshadow the Bar Mitzvah boy.

We lost a true giant. His impact on Judaism, on so many levels will be remembered forever.

May his memory be for a blessing, and we speedily merit the coming of Moshiach.