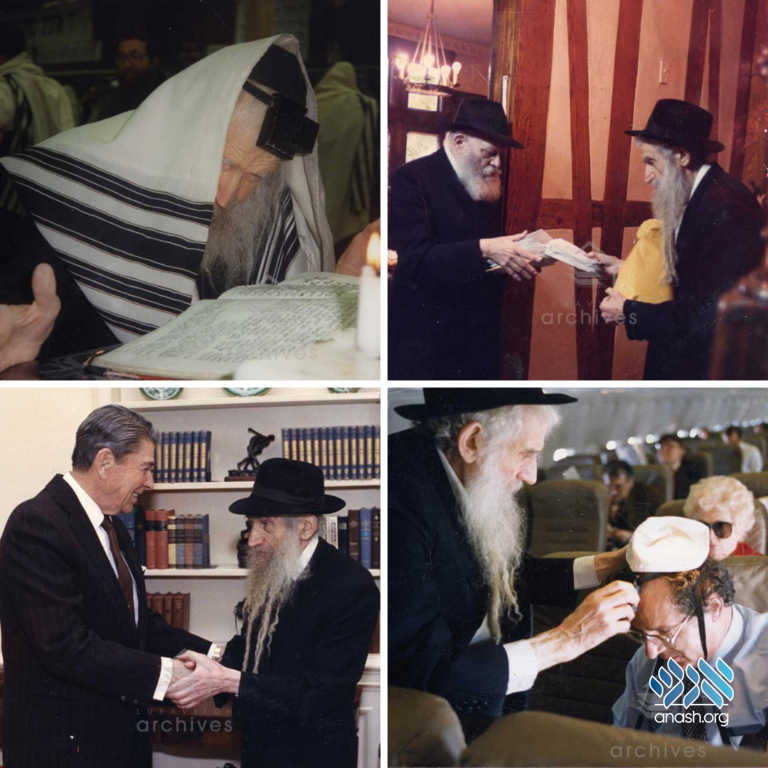 In honor of the yartzeit of the venerable chossid and shliach Rabbi Shmuel Dovid Raichik, we present a selection from the book “SHADAR: Touching Hearts, One Person at a Time.”

Rabbi Raichik spent many hours davening and learning Torah each day, making what he studied an integral part of his daily life. He not only internalized and shared what he learned, but also devoted himself entirely to impacting people’s lives and carrying out the Rebbe’s work.

“A shliach is one who is a messenger from the Rebbe to spread Yiddishkeit,” Rebbetzin Raichik said about being sent to Los Angeles. “We are like the fingers of the Rebbe, extending all over. That is why we were sent out, to bring Torah and mitzvos and Yiddishkeit to the general population.”

To those who noticed, Rabbi Raichik’s dedication to the Rebbe and Rebbe Rayatz was apparent every time he left his home: before stepping outside he would glance up at their pictures, which hung near the entrance.

Once, in Rabbi Raichik’s later years, a neighbor called his son-in-law Avrohom Klyne, telling him to rush to the Raichik house immediately. Upon his arrival he found that Rabbi Raichik had fallen and was lying with his leg bent at an impossible angle. After calling for help he sat down next to him on the floor, spoke to him, and gently held his hand, which was shaking badly.

Rabbi Raichik was staring at a point above his shoulder, and seemed to be struggling to change his position. Eventually, he told Avrohom, “Zeit mochel, forgive me, but you’re blocking my view of the Rebbe’s picture on the wall.”

Representing the Rebbe was not always comfortable for Rabbi Raichik, who was naturally a humble, private person. In a private audience the Rebbe Rayatz once told him, “Since you are my emissary, I accompany you wherever you may travel. And since, if I had personally arrived [in a shul] in any given city, I would have been honored with a seat on the mizrach vant [a seat of honor on the eastern wall], you also need to do that wherever you may go.”

He unfailingly obeyed this directive wherever he went. Once, in the early 1950s, a few students on Merkos Shlichus accompanied him to a shul in Los Angeles. Before they went in, recalled Moshe Groner, Rabbi Raichik told them, “I want you to know, I am going to do something that will seem out of place, but I must do it because I was told to.” He promptly headed toward the front of the shul.

The students later traveled to Milwaukee, Wisconsin, where they met Rabbi Jacob Twersky, the rabbi of Congregation Beth Jehudah. He had seen Rabbi Raichik do the same thing when he visited, and expressed his surprise to the students. “Rabbi Raichik is a bituldike [self-effacing] Jew. Why is he pushing himself to mizrach?” The bochurim, who had deduced that this must be an instruction from the Rebbe, explained it to him.

Despite his years in California, Rabbi Raichik still lived to a certain extent back in the alter heim, the old country.

“People would look at him and assume he was an old, frail man who would spend his day in prayer,” said Sultana Mayesh, who with her husband became close to the Raichik family. “Yet once you got to know him, you saw that he was firmly grounded and very strong. He was very calm, and I never heard him raise his voice.”

Rabbi Eliezer Gross recalled that Rabbi Raichik lived simply. Everything he did, Rabbi Gross said, was to serve Hashem. “In his quiet, unassuming way, he was able to accomplish what a lot of people do with noise and fanfare,” Rabbi Bursztyn said.

Once, Rabbi Raichik was honored by Cheder Menachem. A friend from his yeshivah days, Rabbi Yosef Wineberg, was the guest speaker.

Rabbi Wineberg told the crowd: “Usually, when you come to a dinner, many people praise the honoree. For about five minutes the crowd is listening and nodding their heads in approval. Then everyone loses interest, and the only ones still listening are the other speakers. After another five minutes, the only one listening is the honoree himself.”

“He expressed it perfectly,” Rabbi Gross agreed. “Rabbi Raichik was sitting there and his mind seemed to be elsewhere. He wasn’t listening to a word.”

They had convinced Rabbi Raichik to be honored for fundraising purposes, and he had obliged out of a sense of duty, without any interest in the honor. “Everything he did was for the Rebbe,” said Mrs. Mayesh. “Rabbi Raichik had absolutely no ego.”

Rabbi Gershon Schusterman recalled, “There was a lot more going on with Rabbi Raichik than what you saw. There was no need to show it. He didn’t want nor need public roles. He just wanted things to happen.”

In fact Rabbi Raichik was very knowledgeable about his American surroundings, as those who got to know him soon discovered.

“He looked and acted as if he just stepped off the boat,” Rabbi Schusterman said. “Although he was hovering somewhere around the seventh heaven, his feet were firmly planted on terra firma. And his advice to me was always solid.”

Fishel Grossman recalled catching an enormous tuna while on a fishing trip with a friend. They decided to gift it to the Raichiks. It was after midnight when they arrived, but the Raichik home was brightly lit.

At the long dining room table, Rabbi Raichik sat learning, while everyone surrounded the two fishermen and gleefully asked, “Is it kosher?!”

Rabbi Raichik looked up for a brief moment and answered nonchalantly, “It’s an albacore.”

Dr. Alan Dauer described Rabbi Raichik as someone who knew how to relate to every person he met: a taxi driver, a rabbi, or a Jew attending synagogue for the first time. Although spiritual by nature, he was “able to impart tremendous wisdom and concern. He was genuinely interested in listening to what I had to say, and his responses were well thought out.”

He wanted to know about each of the Dauer children, “You would think that a man like him would be totally sheltered. However, I know that he knew exactly what was going on in the world.”

Once, after a long conversation with Koppel Goldberg about a particular issue, Rabbi Raichik concluded, “Der Aibeshter vet zicher helfen” (G-d will surely help). This was his slogan.

Mr. Goldberg responded, “I am not sure I am worth it.”

“You are surely worth it!” Rabbi Raichik retorted.

“They were very simple words,” recalled Mr. Goldberg, “but coming from Rabbi Raichik, they reaffirmed my faith in myself. He just had that way of making you understand that all problems should be delegated to the basement; in moments of despair you just have the wrong view.”

“If you asked him to daven for you, he never forgot,” said Sarah Levin. “He was an extraordinarily kind, wise, and connected human being.”

This is an excerpt from SHADAR Touching Hearts, One Person at a Time. In honor of the yahrtzeit it is available at a 40% discount. Use code SHADAR.