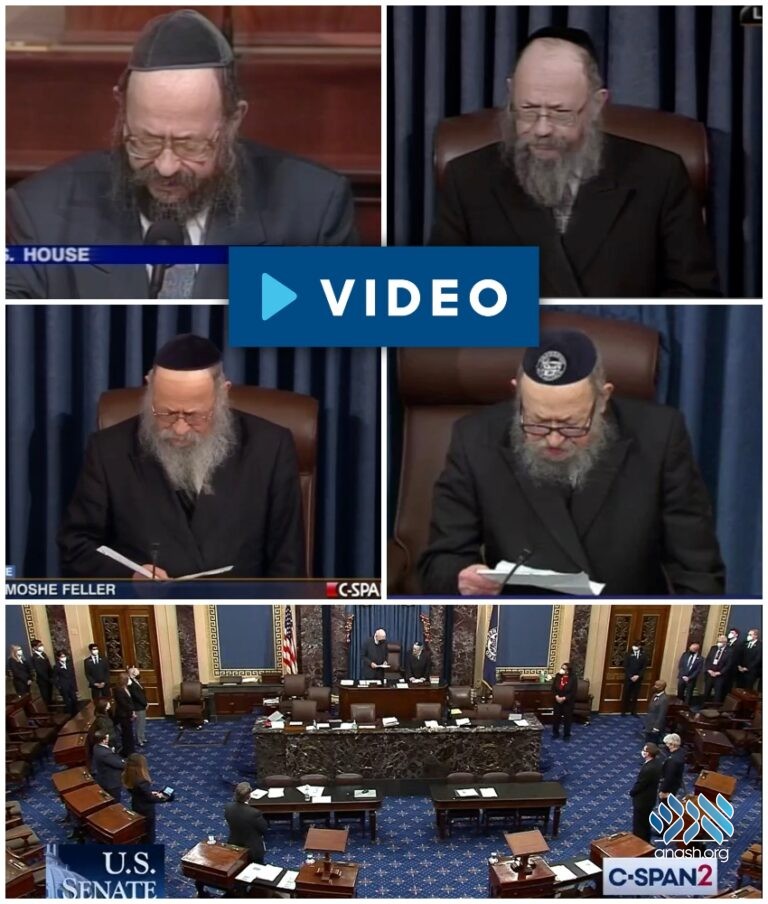 Rabbi Moshe Feller, Head Shliach of Minnesota, made history today when he delivered his 10th prayer in the United States Senate in Washington, DC in honor of Yud Shevat.

On the eve of the 10th of Shevat, an auspicious date in Jewish history, U.S. Senator Amy Klobuchar (D-Minn.) honored a beloved rabbi from her home state to open the Senate with a prayer. For Rabbi Moshe Feller, longtime director of Chabad-Lubavitch of the Upper Midwest, it was the tenth time in over five decades that he offered a prayer in Congress.

On Tuesday morning, the veteran Minnesota Chabad emissary who has served in that capacity since 1961, addressed the Creator from the Senate floor, with his son and several grandchildren, Chabad emissaries as well, looking on. “Almighty G‑d, Master of the Universe,” prayed the 84-year-old rabbi, “the Members of this august body, the United States Senate, convene here today to fulfill one of the Seven Commandments which You issued to Noah and his family after the Great Flood: the commandment that all societies be governed by just laws.” Feller went on to specify each of the Seven Noahide Laws of universal morality, concluding, “Grant, Almighty G‑d, that the members of the Senate constantly realize that by enacting just laws, they are doing Your will.”

Then Feller invoked the memories of two illustrious rabbis whose lives are celebrated this week. “Almighty G‑d, I beseech you today to bless the Senate and our entire nation in the merit of two spiritual giants of our time and of our country, Rabbi Yosef Yitzchak Schneersohn—the Sixth Lubavitch Rebbe—and his successor, the Rebbe, Rabbi Menachem Schneerson, of saintly blessed memory. Tomorrow, the 10th day of the Hebrew month of Shevat, is the anniversary of the transition of their leadership, a day of reflection and action, and one which should energize us to be G‑dly beings.”

In a conversation with Chabad.org prior to the invocation, Feller recalled his first prayer in Congress back on Sep. 29, 1987.“I stood there, my wife Mindy, of blessed memory, was in the gallery, and everybody had to stand,” he said. “I began by saying, ‘Master of the Universe, these members of the Senate are here today fulfilling one of the mitzvot that You gave …’ ”

When Feller reported back to the Rebbe after that first appearance, sponsored by Sen. Rudy Boschwitz (R-Minn.), he brought with him a copy of the Congressional Record, which reproduced the text of his prayer. “The Rebbe wrote to me ‘Tach! Tach! Tach! [a Hebrew acronym for ‘many thanks’] for giving me the news of opening the Senate and especially the beginning of your remarks.’ ” The Rebbe was referring to Feller’s observation before the Senate that their very gathering fulfills one of the Seven Noahide Laws, the imperative to establish just laws for society. “The Rebbe then gave me a directive,” Feller recalls, “ ‘Send your prayer to whoever opens a legislative body—not necessarily the U.S. Senate,’ and that’s what I did for many rabbis. G‑d gave me the idea to open it like that, and the Rebbe was so happy.”

When Feller was invited back to the Senate on Friday, July 14, 1989, the eve of the 12th of Tammuz, the anniversary of the Sixth Rebbe’s liberation from Soviet imprisonment, and his birthday, Feller dedicated some words to his life. “[He] fled war-torn Europe for these shores of freedom in 1940, spending the final decade of his earthly existence as a distinguished citizen of these United States of America, laboring with great self-sacrifice to sanctify Your holy name throughout the world.”

Speaking in New York the next day, Shabbat, the Rebbe mentioned how the representatives of the American people publicly recognized the accomplishments of his predecessor, formally inscribing it in the Congressional archives. The contrast of the Sixth Rebbe’s liberation from exile and the commutation of his death sentence by Stalin’s brutal regime to the freedom and appreciation accorded to the Rebbes in America couldn’t have been starker.

‘No Stranger to the Halls of Congress’

While the Rebbe never addressed Congress himself, his name is no stranger to the halls of Congress, according to Howard Mortman, director of communications for C-SPAN and author of When Rabbis Bless Congress: The Great American Story of Jewish Prayers on Capitol Hill.

“The Rebbe has the distinction of being the Jewish historical figure mentioned the most times by a rabbi opening Congress in prayer,” Mortman told Chabad.org. “Even more than Moses.” Feller, likewise, has the distinction of being the rabbi honored the most times with the Senate prayer, and is second on the Congressional all-time list, notes Mortman, who studied the topic for six years.

The invitations have come from a diverse, bipartisan group of senators, both men and women, Mortman notes. In addition to Sen. Klobuchar and Sen. Boschwitz, Feller was in the past sponsored by the late Sen. Paul Wellstone (D-Minn.) and then his successor, Sen. Norm Coleman (R-Minn.), as well as Sen. Rod Grams (R-Minn.). The first ever Chabad rabbi to open Congress was the late Rabbi Ben Zion Schaffran, who was invited in 1974 by Rep. Elizabeth Holtzman (D-N.Y.).“It’s to Chabad’s credit; it shows the diversity of America.”

This bipartisan admiration was highlighted by Sen. Daniel Patrick Moynihan (D-N.Y.) on June 12, 1991, after a prayer by Rabbi Shmuel Butman, director of Lubavitch Youth Organization in New York. At the time Moynihan noted how Sen. William Borah (R-Idaho) had been instrumental in securing the Sixth Rebbe’s release from the Soviet Union in 1927. “[His intervention] on behalf of this beleaguered Chassidic family stands as a noble example of courageous moral leadership,” Moynihan told the Senate. Borah’s intervention wasn’t about the votes, he acknowledged. In fact, Idaho only had 100 Jewish voters at the time, and presumably few were Chassidic. “Once in a while it’s good to do something that will get me votes in that final election we’re all going to stand for some day,” Moynihan declared.

Prior to the ceremony Mortman said he has been especially looking forward to Tuesday’s prayer. “They’ve really pulled back on guest chaplains during Covid. Today will be just the third time a rabbi is leading the prayer since March 2020.” On average, he says, seven to eight rabbis open Congress each year.

As Mortman chronicled the history of rabbis praying before Congress, one of his favorite moments was on Feb. 3, 2016, when Rabbi Yosef Greenberg (co-director of Chabad-Lubavitch of Alaska) was honored with leading the prayer. It was the first-ever entry for Alaska in the database he spent years compiling.

Still, after writing about the more than 400 rabbis who’ve opened Congress since 1860, on the eve of the Civil War, he doesn’t fail to be impressed by Feller. “That he can still do this, it’s a tribute to him, and an incredible moment for the Lubavitch community.”