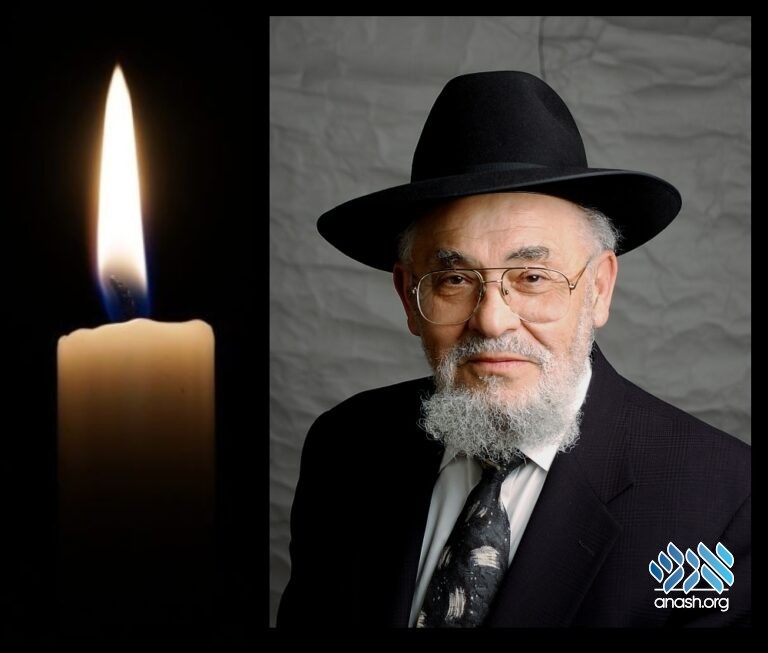 Rabbi Tendler was the rabbi of the Community Synagogue of Monsey, New York, and was a magid shiur at RIETS for decades. He was also a professor of biology and chairman of the Biology Department at Yeshiva College. He had lectured and written extensively on medical ethics.

The levayah is scheduled for Thursday afternoon at the Community Synagogue of Monsey, 89 West Maple Avenue at 2 p.m.

In a 2010 interview with JEM’s My Encounter, Rabbi Tendler shared his first pivotal meeting with the Rebbe:

Now, because I was the son-in-law of Rabbi Moshe Feinstein, I became the address for inquiries from various quarters; I was easier to reach than he was. Rabbi Hodakov, who was the secretary to the Lubavitcher Rebbe, would often call me to pass on messages, and I served as an intermediary, but I had no direct contact with the Rebbe.

One day I got a call – I believe it was sometime in 1970 – that the Rebbe wanted to see me. This audience lasted from midnight until seven in the morning, and much of that time we spent talking biology.

The Rebbe was well-versed in secular knowledge and he was up-to-date on the latest advances in science. I have to admit that he was even ahead of me when it came to physics, especially the subject of radioisotope dating of the age of the earth.

Of course, his opinion was that any data that seems to suggest the earth is older than 5,700 years old is only a test from G-d, period. He argued that the rate of decay changed at the time that the creation of the earth was completed and, therefore, scientists are making a mistake in assuming that the current rate of decay has remained the same. Of course, if the rate of decay by which we date uranium has altered over time, then this would have a huge impact on the scientific dating system.

During our conversation, the Rebbe proposed that I write a biology textbook which would be acceptable to the New York State Department of Education but which would skirt the whole issue of evolution. At that time, the study of evolution was mandatory, and students could not pass the Regents tests without answering questions about this subject.

But I wasn’t prepared to write such a textbook; I didn’t think it was necessary because many Torah scholars found ways to reconcile Torah and the dating of the earth. Furthermore, I was not disturbed by the issue of evolution as the Rebbe was.

Overall though, I was most impressed by his scientific knowledge. For example, he was very much up-to-date on new drug development such as medicines coming from wasps and marine animals, the denizens of the deep. These were recent developments, newly published in scientific journals, and yet he knew about these things. He cited these discoveries as evidence that whatever G-d has created in this world has a reason and a purpose.

His reading would imply that we, as human beings, are meant to take G-d’s creation a step farther. In medical ethics, one of the key questions that is often asked is, “Are we playing G-d?” Using the Rebbe’s interpretation, I would answer that question with, “G-d wants us to play G-d. He created so much out there for us to use, and He wants us to complete the rest of His work.”

Even if I disagreed with the Rebbe on the issue of the age of the earth, I could not dismiss his arguments regarding this issue. And indeed, these days, when I lecture on evolution all over the world, I make a point of presenting the opposite point of view, using the Rebbe’s words. And I have to say that what he taught me has been of great value to me.

In addition, he taught me another invaluable lesson of a personal nature. At the time, I was under attack by the fundamentalist element in Israeli society because of a recommendation I made for a director of Shaarei Tzedek Hospital in Jerusalem. The doctor I recommended was a pathologist, and many fundamentalists assumed he performed autopsies which they considered as being against Jewish law. However, he was a different kind of pathologist, an expert in cell components – something which this group was too ignorant to grasp – and he did not perform autopsies. Nonetheless, this fact did not save me from condemnation by some quarters.

I brought this issue up to the Rebbe because I was thinking of immigrating to Israel, but I feared being castigated over there. His response was unusual; he said, “It’s not the Jewish way to make a decision out of fear. You can’t live your life afraid of somebody.”

He went on, “Don’t think too much of what others will say; if you’re sure you’re right, you do what you have to do. You have to be independent.” He even suggested that one has to be independence in the way one serves G-d.

His opinions were most surprising and enlightening to me. In short, I would say that this encounter with the Rebbe was unforgettable. It has informed my life in many ways – not the least, professionally. And, of course, he has informed the lives of many. He set up a system that works unbelievably well and is able to reach millions of people and even more when we consider all the generations to come.