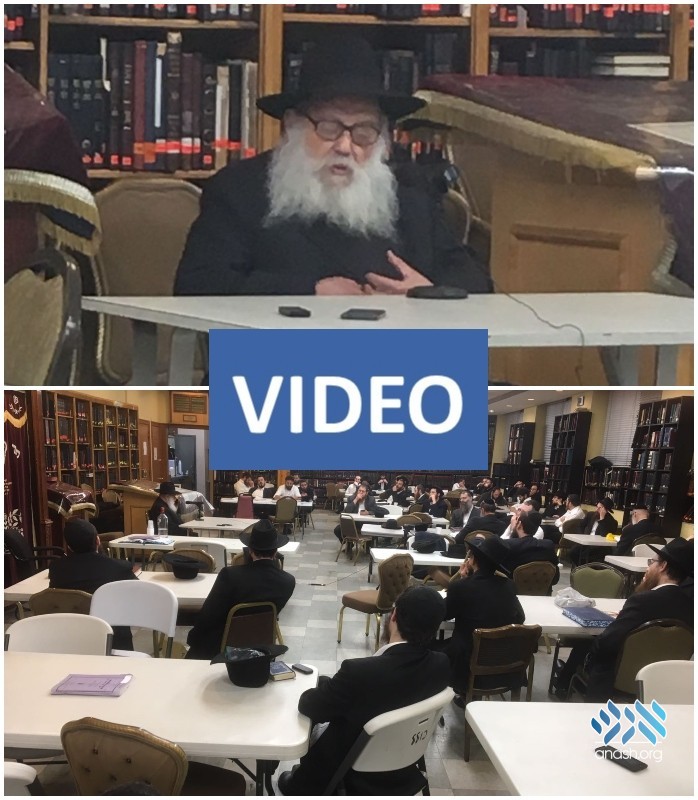 Watch: In honor of the new school year, watch a talk to educators by Rabbi Leibel Groner a”h in 5778, at an event hosted by Igud Hamelamdim in 5758. English transcript inside.

In honor of the new school year, watch a talk to educators by Rabbi Leibel Groner a”h in 5778, at an event hosted by Igud Hamelamdim in 5778.

There is a letter from the Rebbe where he writes that every mechanech is a shliach from Hashem.

The posuk says, “Bonim atem l’Hashem Elokeichem,” and the Baal Shem Tov says every Jew is like an only child who was born to his parents in their old age. As a “father”, Hashem has an “obligation” to be mechanech his child. In order to fulfill His own chiyuv, Hashem makes certain people His shluchim as mechanchim. That means that if you are a mechanech, Hashem holds you are fit to be a mechanech for Hashem’s children. What a big zechus!

When a person knows that he is a shliach of Hashem, he knows that he has power to fulfill the shlichus that Hashem wants from him.

A Mechanech for Each Child

What is the essence of chinuch?

It says in the possuk “חנוך לנער על פי דרכו גם כי יזקין לא יסור ממנה,” teach the child according to his level, so that when he grows old he will not stray from it. Some say that this means to learn with a child on his level – first alef-beis, then Chumash, and then Gemara. However, if you look in Rashi on that posuk, Rashi doesn’t mention teaching the child “how to learn.” Rashi says that you must teach a child about what is good and what is not good, correct and incorrect.

Chinuch is about teaching a talmid who he has to be. The Frierdiker Rebbe and the Rebbe explain in their letters that the goal of a mosad chinuch, and especially of a mosad chinuch Chabad, is to educate children to have yiras Shamayim, to be mehadar in mitzvos and to be chassidim. A teacher is called a mechanech, not just a rosh yeshiva or melamed, because he must also guide the talmidim in chinuch, “what is good and what is not.” The Rebbe wants us to be “mechanchim.”

There are mechanchim who come to a class of 10 or 20 talmidim, and they think to themselves, “I will invest myself into the stronger talmidim, but won’t put as much energy into the weaker ones.” The Rebbe is very against this notion. These are Hashem’s children!

The teacher must look at every single one of his talmidim as a ben yachid. He must be devoted to every single one! “Whoever sustains one life, it is as if he sustains the whole world” – this is talking about someone’s physical life, all the more so one’s spiritual life! Every child must be seen as his own world, and the mechanech must be fully devoted to him.

Once, a few menahalim from Tomchei Temimim, Oholei Torah, and other places came to me with a request. In their yeshivos, some of the bochurim were exceptionally strong, metzuyanim, and the menahalim wanted to make a special class for them to really grow and shteig. They wanted me to ask the Rebbe about the idea. They gave me a letter to bring in and I brought it in with other letters. When the Rebbe came to this letter, he exclaimed, “Vos?! Vi falt ein a mechanech afilu aza min svara? What?! How does a mechanech even think of such an idea?” The Rebbe explained that they must take into consideration how this would make the other talmidim feel. They would see themselves as being chutz l’machane, and how can you do that to a talmid? It may even make him problems for shiduchim! The Rebbe concluded, “It shouldn’t even be considered.”

What should you do for those talmidim that want to learn more? Give them material to learn at home: an extra piece of Gemara, an extra maamar Chassidus, or a piece of Shulchan Aruch. In class, however, all the talmidim are equal – Hashem’s children. A mechanech must be totally given over to each and every talmid completely.

A mechanech once asked the Rebbe permission to leave chinuch and go to work in a beis Chabad. He wanted to be involved in hafatzas haYahadus and hafatzas hamaayanos. The Rebbe answered, “Certainly not!” and explained that chinuch overrides even hafatza because the foundation of the entire Am Yisroel is חנוך לנער על פי דרכו גם כי יזקין לא יסור ממנה. We know how important hafatza is to the Rebbe. However, chinuch is even more important, and therefore the Rebbe wouldn’t let a mechanech leave his post.

There is a letter from the Rebbe that says when a teacher is in class, he is a mechanech, and out of class he should be a yedid, a friend. The Rebbe wants the talmid to feel not only that he has a teacher to learn with him, but that he has someone with whom he can speak.

There are families in which the children find it difficult to say what bothers them. If the child knows he has a yedid, then he is in a completely different situation. In class, the talmid must know, “Kavod rabeach k’moreh Shamayim,” this is my teacher/mechanech/mashpia, etc. But, outside of the classroom, take the talmid aside and make him feel that he can speak with you about whatever is on his heart.

A 16-year-old bochur once wrote the following: “When I come to my father and ask him for help, he answers, ‘I just came home from work and am tired, go to Mommy.’ I go to Mommy and she says, ‘It’s not my line. I don’t know what to do for you.’ I was 13, I became 14, and my problems became more serious. Now I am 16 years old. I am desperately in need of guidance; to whom should I turn?!’”

In situations like these, the Rebbe wants the teacher to take the place. The child should have someone to turn to.

When the Frierdiker Rebbe came to America in 5700 (1940), he opened a yeshiva for talmidim of bar mitzva and higher. On 11 Menachem Av 5701 (1941), which was Monday, a day after the fast, the Frierdiker Rebbe opened a yeshiva ketana for six children under bar mitzva, and I was zoche to be one of the six students. The Frierdiker Rebbe said that he was establishing this yeshiva so that children could get a chassidishe chinuch from a young age. He took a melamed that was able to have a close personal relationship with the talmidim. He was like a friend, but we obviously gave him kavod.

Every Thursday night, the menahel Reb Zalman Gourarie from yeshiva gedola would take three or four talmidim and make a farbrengen in his house. In this way, each one of the talmidim that had a problem would have a setting in which he was comfortable to speak about it. The next week he took another four. By the end of the year he took all of the talmidim. The talmidim would say, “He has no idea what he did for us!” We were able to speak openly about the meaning of Chassidus, hiskashrus, shmiras hasedarim, mitzvos, and so on. These bochurim became shluchim of the Rebbe.

Another point that the Rebbe explains: “כל יום יהיו בעיניך כחדשים”. Chassidus asks, “How can it be?” The Baal Shem Tov says that everything that a Jew sees or hears is in order to help him in his avodas Hashem.

The Frierdiker Rebbe explains, if you hear a vort or a story that you have already heard many times, you may think that you already learned a lesson from it. However, כל יום יהיו בעיניך כחדשים, if Hashem made you hear this vort or story again, it is proof that you need it right now for your current situation.”

When the teacher is going to class, he shouldn’t think it is a continuation from yesterday. Today is a new day, a new chayus, and a new life! Today is a new lesson. You are teaching the talmidim something they did not know before. Therefore, the approach every day has to be not only כחדשים, but חדשים ממש.

There was an 18- or 19-year-old bochur in zal in the times of the Frierdiker Rebbe who wasn’t so good at learning.

In those days, hanhala went into the Frierdiker Rebbe once a week or once every two weeks, and the Frierdiker Rebbe wanted to know about every bochur individually. When it came time to discuss this bochur, hanhala suggested giving him a job because it was hard for him to learn. The Frierdiker Rebbe looked at them and exclaimed, “Do you understand neshamos? He will sit and learn, and you will have more nachas from him than the other talmidim.” When he started learning smicha, he was fluent in Yoreh Deah and knew every Pri Megadim inside and out. By the test, the rosh yeshiva said that he was a metzuyan!

You cannot always know what your talmid is capable of achieving. Your job is to be devoted to each talmid. This is something that all the Rebbeim pushed for. You have to look at every talmid as an עולם בפני עצמו, and look for ways to be mechazek him. Especially when others are doing better, he may feel bad. Be mechazek him and tell him, “Do what you can!”

There is a letter in which the Rebbe writes that the most important thing in the life of a Jew is chinuch. Not just the chinuch of your own children, but the chinuch of whoever you can be mechanech.

The Rebbe taught how we can imbue each child with a feeling of unique purpose. It says that נתאווה הקב”ה … דירה בתחתונים”” Hashem desires a dira b’tachtonim. This has to be through the acts ofמעשה התחתונים, people in this world. When a mechanech tells a talmid that he has the ability to fulfil Hashem’s desire for a dira b’tachtonim, not just as a part of the whole but as an individual, it will encourage the talmid immensely. It will be inscribed on his brain and heart that he can fulfill Hashem’s desire. He will know that Hashem gives him the power to carry this out.

The Rebbe says that the more the teacher helps the student, the teacher gains himself. כל המרבה לספר ביציאת מצרים הרי זה משובח: The Rebbe says that when you tell another the story of Yetzias Mitzrayim, הרי זה משובח, the one who is doing the telling is משובח. Similarly the more you work with a talmid to achieve, the more the mechanech is meshubach. The more you help the other the more it will be good for you.

The Frierdiker Rebbe tells over in a sicha, that at Matan Torah the Aibershter became a mechanech: Hashem started teaching with “komatz-alef-oh” (Anochi)! The Aibershter was mechanech the Yidden.

Reb Shloima Horenshtein, a Boyaner chossid, was from the family of the Rebbe Maharash and he would come often to the Rebbe’s farbrengens. Reb Shloima related: “After 5725 (1965), when the Rebbe started Rashi sichos, the Rebbe once said to me, ‘Ir zeht Reb Shloima? Ich bin yetzt gevuren a melamed dardiki, ich lern mit di chassidim pirush Rashi al haTorah, uhn ich bin zeier tzufreeden fun dem!’ You see Reb Shloima? I became a school teacher, I teach the chassidim Rashi on the Torah and I am very content with that title.”

We can take a lesson from the above, to have pride in teaching school children! It’s no small title. The Aibershter is a mechanech, the Rebbe a mechanech; be proud!