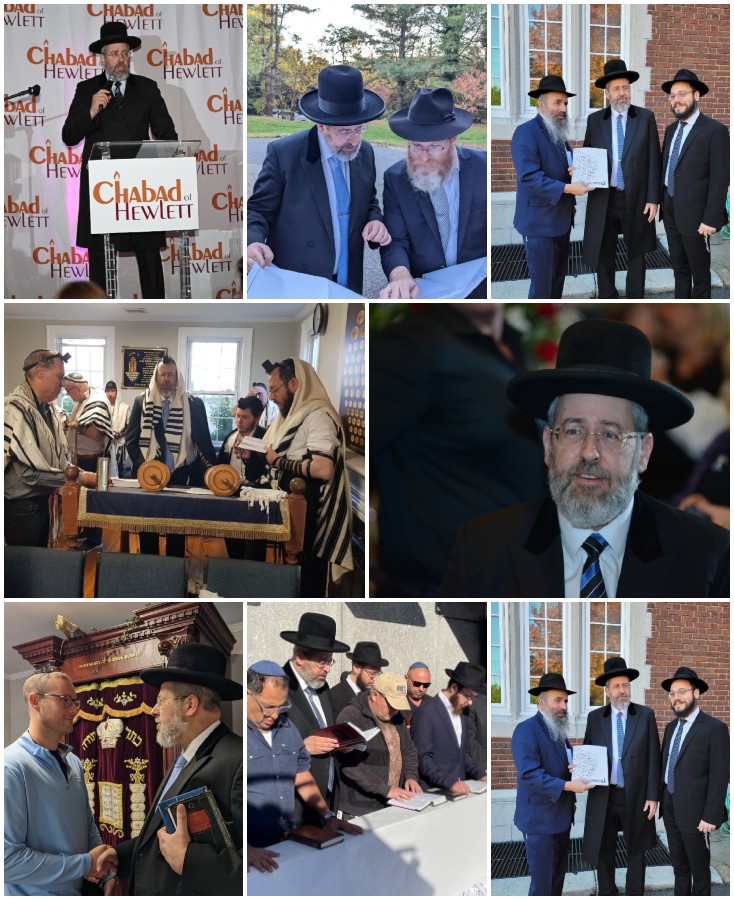 Last month Chabad of Hewlett and Chabad of Long Island brought Rabbi Dovid Lau, Chief Rabbi of Israel, to Long Island to tour the Chabad Mosdos. During his trip, Rabbi Lau visited the Chabad houses, schools, mikvahs, and communities all along Long Island.

The idea began the year prior when Rabbi Nocham Tenenboim was visiting Eretz Yisroel. He met with Rabbi Lau and shared with him the many activities that were taking place at all of the Chabad houses under his management. Rabbi Tenenboim invited Rabbi Lau to come and experience the community for himself, and Rabbi Lau happily agreed.

Long Island which in its entirety is seven times larger than the Eretz Yisroel is home to 53 shluchim families. All of whom were able to either host or meet Rabbi Lau during his trip.

Many preparations were made for the rabbi’s visit. Special attention was given to giving opportunity to as many communities as possible. During his trip, Rabbi Lau started his schedule for the historic visit early in the morning and finished it late into the night.

Wherever they went, the Rabbi Nocham Tenenboim accompanied the Chief Rabbi as well as police cars that stopped traffic lights and traffic jams for them so that they would reach their destinations in the shortest possible time

On Rabbi Lau’s first day, the pair davened at Rabbi Tenenboim’s Chabad house and visited girls school SKA girl’s High School in Hewlett. The huge campus, filled with girls from all over the region, was excited for the unique opportunity to host Rabbi Lau.

In the evening, a tribute dinner was held to mark the 10th anniversary of Rabbi Tenenboim’s Chabad house. The Chief Rabbi spoke to the community leaders privately and praised the activities of the Chabad home among the residents. After reciting Tehillim and a fascinating multimedia program, in front of hundreds of participants, Rabbi Lau shared words of appreciation and admiration for the warmth and love of Chabad.

On the second day of his trip, Rabbi Lau visited the schools in the northern part of Long Island under Rabbi Geisinsky’s guidance. At each stop, Rabbi Lau recited Tehillim with the students in the merit of the Chief Rabbi’s wife who was preparing for an upcoming medical treatment, Feiga Tzipora Bat Hadassah.

In the afternoon, the Chief Rabbi continued to tour the Beis Chabad in Roslyn, a prestigious town where the building of the Chabad house which is built of Jerusalem stone stands proudly in the most prominent place in the region. The rabbis also visited a new and magnificent mikvah that had just been completed.

Later they visited the Holocaust Museum where Rabbi Lau met with the leaders of the Jewish organizations operating on Long Island. Here, the Chief Rabbi emphasized the importance of Jewish education and continuing the chain of generations.

On Friday the original plan, was made to have Rabbi Lau speak to the high school students of a public school composed mostly of Jewish students. At the last minute, the school’s administration did not allow it on the grounds of separation between religion and state.

However, while traveling to another event, Rabbi Tannenboim learned that many students from the school had arrived at his Chabad house during their lunch break. In a moment’s decision, the Rabbi changed his route and went to give chizuk to the boys and girls. In that hour, Rabbi Lau showered them with affection and words of Torah that will forever remain engraved in their hearts.

Shabbos was spent with a community dinner hosted by Rabbi Tenenboim and Shabbos morning shul was packed even with people who don’t usually come.

Sunday was used to tour all of the Chabad Houses in the area. After visiting the Chabad Houses it is clear there is a revolution taking place on Long Island. In one specific example, a huge shul that was built about a century ago was desolate and about to fall down until the Shliach Rabbi Goodman of Chabad of the Beaches renewed it and made it full of life.

On the last day, of his trip, Rabbi Lau visited the Ohel. He wrote a pan and daven for all of the people living in Long Island that he had met during his special visit.

The historical visit strengthened the Jews of Long Island and emphasized the power of Lubavitch and the Rebbe’s shluchim who give their lives to their community day and night.