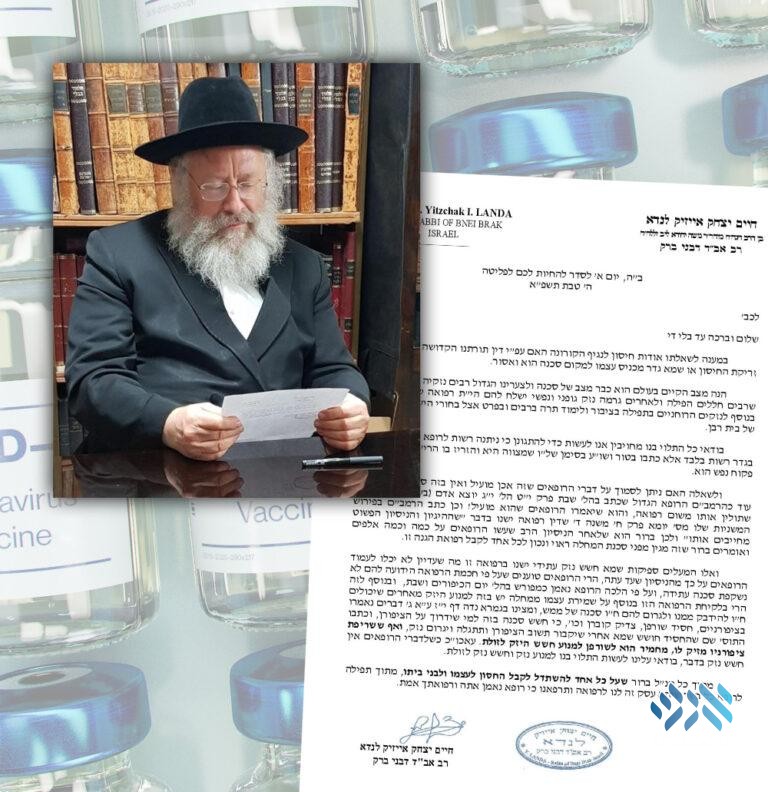 As the first doses of the newly approved COVID-19 vaccines are administrated around the world, Harav Yitzchak Eizik Landau, rov of Bnei Brak, joined other prominent rabbonim encouraging all who have the ability to get the vaccine.

As the first doses of the newly approved COVID-19 vaccines are administrated around the world, rabbonim have begun studying the subject and releasing rulings addressing the new phenomenon.

In recent days, two Covid-19 vaccines – Pfizer/BioNTech’s and Moderna’s – were authorized for emergency use in the United States. Other countries preceded the USA’s approval by a few days or followed it shortly after.

In many countries, the first vaccines have begun to be administered, with frontline workers and those considered high-risk given priority.

As this newest stage of the fight against the pandemic begins, rabbonim around the world are debating the halachic implications of the new vaccine. Weighing in in a letter released on Sunday, Hey Teves, Harav Yitzchak Eizik Landau, rov of Bnei Brak, empathically stated his position that everyone should take the vaccine themselves, and vaccinate their household members as well.

“The situation in the world is one of sakana – danger – with the illness already having claimed many victims, and many others have been harmed physically and emotionally by the pandemic,” he wrote. “In addition, there is a spiritual danger, especially to bochurim and children, with shuls and yeshivos closed.”

Harav Landau goes on to quote “the great doctor”, the Rambam, that in matters of health, one should listen to the doctors, and what they say is effective.

He also addressed the claim that vaccines might cause a future harm, by saying that according to Halacha, one must trust a doctor in these matters, and the doctors say the vaccine is safe. In addition, he writes, the vaccine is also to protect others, and one must go to great lengths not to harm other people.

“My conclusion from all of the above is, that everyone should endeavor to take the vaccine, and vaccinate his family as well, with a tefillah to the Healer of all flesh that it will heal us,” he writes.