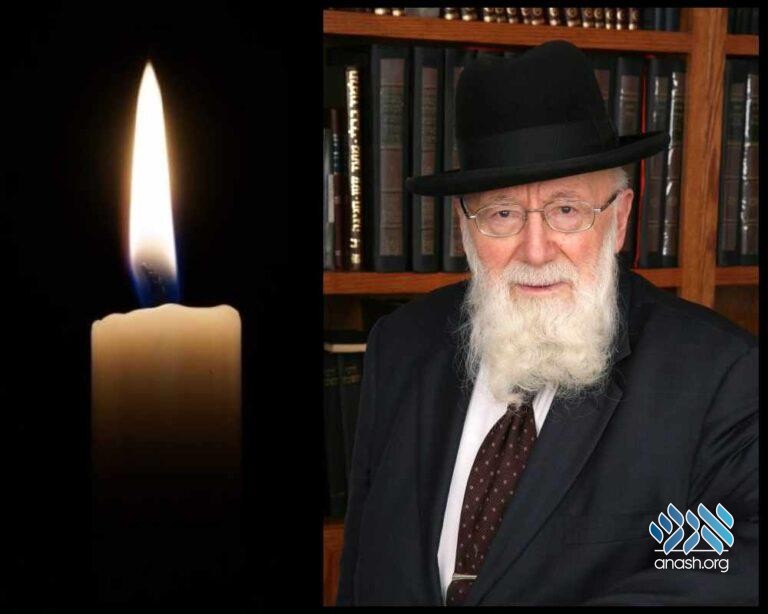 He later attended Yeshivas Rabeinu Yitzchok Elchanan where he received his semichah. He served as the rabbi of the Young Israel of Boro Park for 18 years – where he warmly welcomed the chassidim who came to his shul for tahalucha – and held pulpits in Rhode Island, New Jersey and Pennsylvania.

Rav Schwartz was a Rov and Posek in Chicago for over 30 years, where he served as Rosh Beth Din of the Chicago Rabbinical Council (cRc) and headed its Kashrus commission. He also served as Av Beth Din of Beth Din of America.

In addition to his rabbinical positions, he was the editor of Hadarom, a well-known Torah journal, and authored 3 sefarim: Divrei Regesh, Migdanos Eliezer and Shaarei Gedulah.

Since arriving in Chicago, Rabbi Schwartz enjoyed a very close relationship with Illinois Head Shliach Rabbi Daniel Moscowitz and Rabbi Tzvi Shusterman. He was a frequent participant at Chabad events.

In a conversation with Anash.org, Rabbi Boruch Hertz, rov of Anash in Chicago, spoke of Rabbi Schwartz’s dedication to the community and his close relationship with Rabbi Moscowitz.

On 19 Adar 5752, only a week before Chof Zayin Adar, Rabbi Schwartz came to the Rebbe for Sunday dollars. He was accompanied by Rabbi Daniel Moscowitz, head shliach to Illinois, and Rabbi Avrohom Shemtov, shliach to Philadelphia and Chairman of Agudas Chasidei Chabad.

After introducing him as the Av Beth Din in Chicago, the Rebbe gave Rabbi Schwartz two additional dollars, and wished him “yaarich yomim al mamlachto“, that he live long years on his kingdom.

“He was a tremendous rov, posek, and friend of Chabad,” Rabbi Meir Moscowitz told Anash.org. “At his 90th birthday, I gave him a picture of his visit to the Rebbe on 19 Adar 5752, when Rebbe wished him ‘yaarich yomim al mamlachto’. He was very excited to receive it, he told me he was going to hang it up in his home.”

A statement by the Orthodox Union extolled Rav Schwartz’s encyclopedic knowledge of Torah literature. He was an incredibly compassionate and sensitive person, whose impeccable middos and warm demeanor made him approachable to all. He will be missed deeply by his family, by his Chicago Jewish community, and by all of American and world Jewry.

Rav Schwartz dealt with many of the most difficult halachic shailos, including geirus, kiddushin, and more. In 2002, he was the head of a three-dayan panel that examined cases of agunos from the September 11 attacks, using DNA testing of post-mortem remains to verify the death of their husbands and allow them to remarry.

The levayah was held Thursday morning in Chicago.

He is survived by his two sons: R’ Avraham Yeshaya Schwartz and R’ Chaim Schwartz; his daughter, Mrs. Rivka Leah Goldman; and grandchildren.