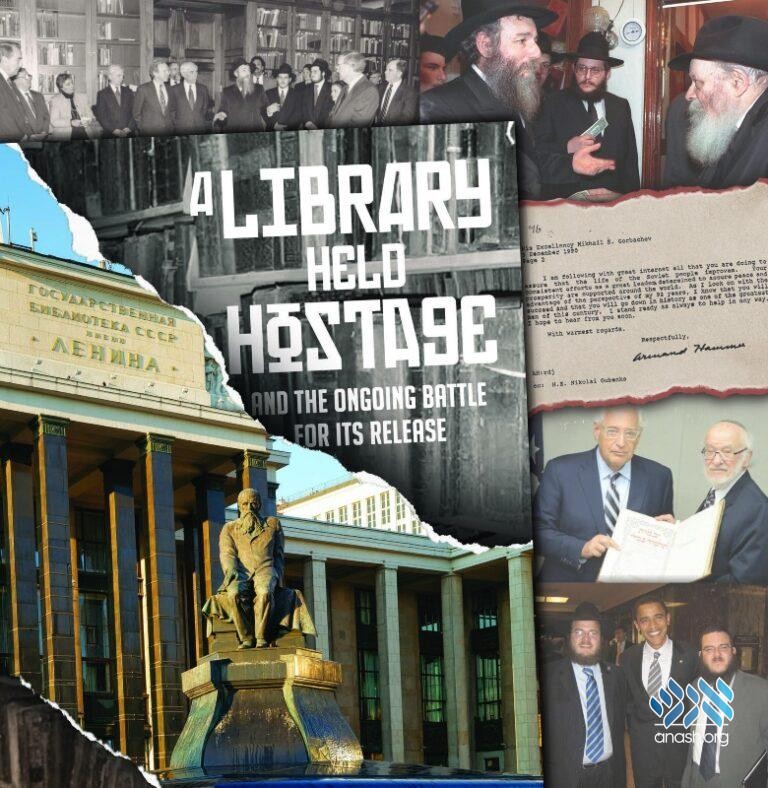 In a new publication released in honor of Hey Teves, California’s Head Shliach Rabbi Shlomo Cunin tells over an extensive history of the battle against Russia to return the the stolen seforim of the Rebbeim.

In honor of Hey Teves, and marking 30 years since the establishment of Agudas Chasidei Chabad of the Former Soviet Union, Rabbi Shlomo Cunin released a publication containing an extensive history of the battle for the stolen seforim of the Rebbeim in Russia.

Rabbi Cunin wrote that he is publishing the history “To honor and commemorate the 30th anniversary since the Rebbe established Agudas Chasidei Chabad of the Former Soviet Union.”

“Aguch of Russia was the last institution to be officially established under the personal and direct leadership of The Rebbe as ‘תחת נשיאות כ”ק אדמו”ר שליט”א’,” he wrote.

Although details of the story were published in various books, magazines and journals, this is the first attempt to document the entire story from the inception until this very day.

The booklet includes fascinating details of the efforts of Rabbi Cunin and the other members of the delegation to save the seforim, utilizing any channel available. This included efforts at the highest levels of the Russian and US Government, and more recently, in United States Courts.

Also included in the booklet are a collection of answers from the Rebbe to Rabbi Cunin’s letters and queries during, and regarding, the mission to Moscow in the 1990s to attempt and redeem the books.

“On Hei Teves 5752 and during the last Hei Teves farbrengen (7th of Teves, Shabbos) that we were zoche to hear from the Rebbe, the Rebbe explained why the Seforim is a matter of pidyon shevuyin mamash,” Rabbi Cunin writes.

In the forward of the new publication, Rabbi Cunin explains why there is renewed hope for the return of the library.

“November 6th, 2020 we had an incredible miracle regarding the Rebbe’s manuscripts, books and objects. About 10 years ago, the US District Court in Washington DC had ordered the Russians to return all the Seforim but they refused to do so. The Court then issued sanctions against the Russians for their refusal and awarded Chabad an interim judgment allowing Chabad to collect these sanctions from any Russian owned assets in the US.

“However, when Chabad began serving subpoenas to ascertain what assets the Russians had here the Russians filed a motion to quash the subpoenas. Now Judge Lamberth (who has been on the case since the beginning) issued an order denying the Russian’s motion. In his unprecedented 54-page ruling, Judge Lamberth goes into detail about all the issues in this case and why his ruling is correct.

“Now the Shluchim fighting to get back the Rebbe’s seforim have a powerful tool to use. Of course, it is not the assets of the Russians we want, but the וחפצים כתבים ספרים themselves,” he wrote.