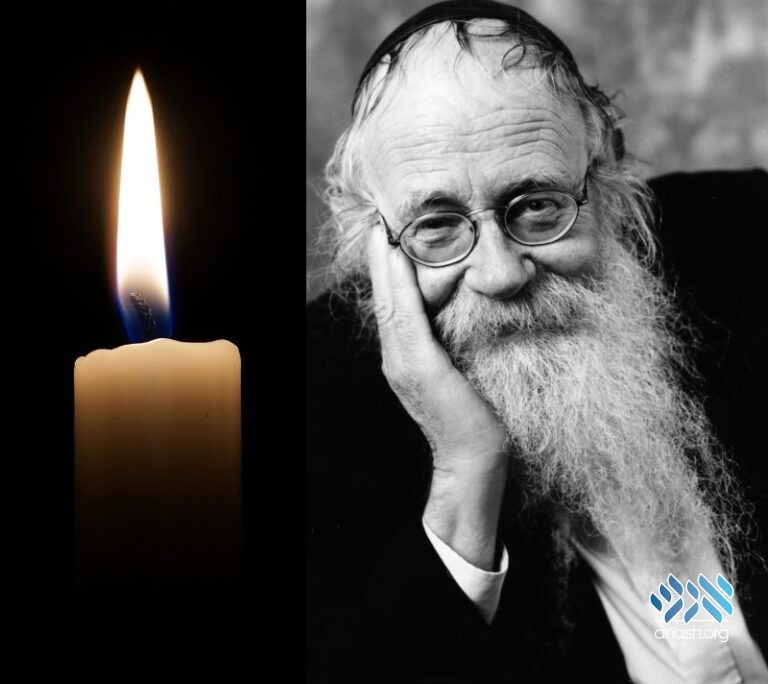 Rabbi Adin Even-Israel (Steinsaltz), an eminent Lubavitcher Torah scholar who authored commentary and seforim on nearly every realm of Torah, passed away on Friday, 17 Av in Yerushalayim.

Rabbi Adin Even-Israel (Steinsaltz), a emimnent Lubavitcher Torah scholar who authored commentary and seforim on nearly every realm of Torah, passed away on Friday, 17 Av in Yerushalayim.

Adin Steinsaltz was born in Jerusalem in 1937 to secular parents, Avraham Steinsaltz and Leah (née Krokovitz). His father was a great-grandson of the first Slonimer Rebbe, Harav Avrohom Weinberg, and was a student of prolific author and thinker Hillel Zeitlin.

After completing his studies, Steinzaltz established several experimental schools and, at the age of 24, became Israel’s youngest school principal.

In 5726, he founded the Israel Institute for Talmudic Publications, and began his monumental work transcribing a commentary on the Talmud, including translation into Hebrew, English, Russian, and various other languages. He later went on to author commentary on the entire Tanach, Rambam, Tanya and also wrote and published many other books.

After working for decades, Steinsaltz completed his Hebrew edition of the entire Talmud Bavli in November 2010, having been the first person in modern history to single-handedly complete a commentary on the entire Shas. Since then, the commentary has been translated in part to a number of other languages, including Russian and English.

Steinsaltz was a proud chossid of the Rebbe who encouraged his work authoring a commentary on Shas. Rabbi Steinzaltz was honored with one of the pessukim of Ata Horeisa at the historic Siyum of Sefer Torah Shel Moshiach in 5730, and was introduced as a representative of the learning group by president Zalman Shazar.

Around that time, he began serving as the Rov of Tzemach Tzedek Shul in the old city of Yerushalayim, and he received instructions from the Rebbe how to run the shul.

Continuing his work as a teacher, Steinsaltz established Yeshivat Mekor Chaim in 1984, and Yeshivat Tekoa in 1999, and also established yeshivos in the Former Soviet Union. He also served as president of the Shefa Middle and High Schools. He has served as scholar in residence at the Woodrow Wilson International Center for Scholars in Washington, D. C., and the Institute for Advanced Study in Princeton.

In 5750, the Rebbe suggested to Steinsaltz by a ‘Sunday Dollars’ that he change his last name. He later choose the name Even-Israel, using that as his primary surname from then.

Steinsaltz’s classic work of Kabbalah, The Thirteen Petalled Rose, was first published in 1980, and now appears in eight languages. In all, Steinsaltz has authored over 60 books and hundreds of articles on subjects including Talmud, Chassidus, Tanach, Mishna, Jewish philosophy, sociology, historical biography, and philosophy.

He is survived by his wife Chaya Sara, and children Rabbi Meni Even-Israel, Rabbi Amechaye Even-Israel, Esty, and grandchildren.