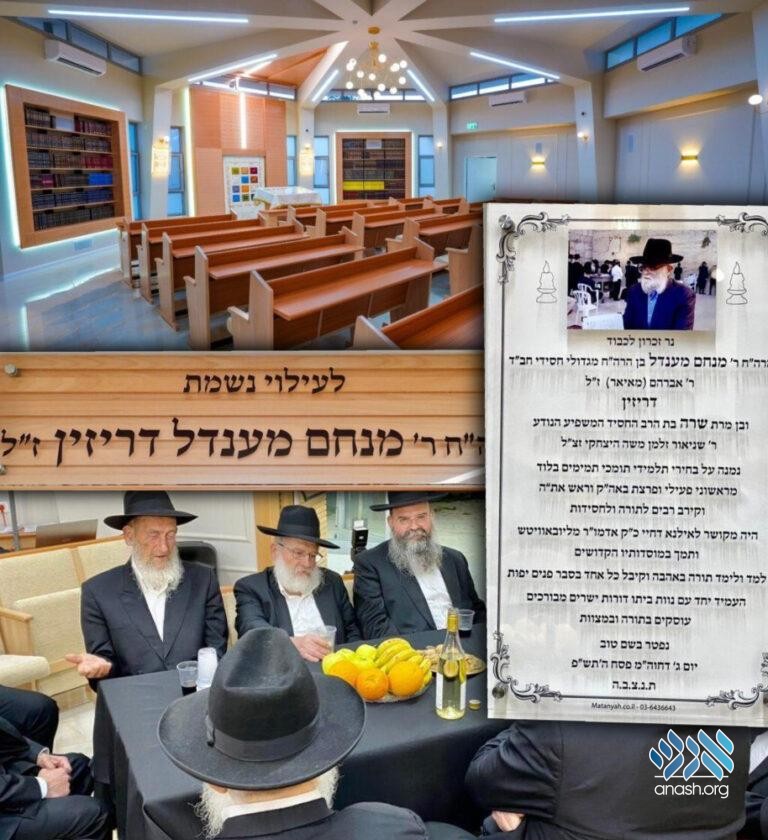 The first yahrzeit of Crown Heights philanthropist R’ Mendel Drizin was marked in Kfar Chabad with the dedication of the entrance to the new “Mayanotecha” shul, and a farbrengen in his memory.

R’ Mendel spent his formative teenage years in the village of Kfar Chabad, and the Drizin family chose to have him memorialized there by dedicating the beautiful entrance to the new “Mayanotecha” shul.

The new shul is a project of the wider Mayanotecha program, headed by Rabbi Moshe Shilat. Throughout the year, thousands of young students from across Eretz Yisroel are brought to Kfar Chabad by the program to learn Chassidus and get a taste of the chassidishe lifestyle of the village. The new shul will be serving as a center for these activities.

The dedication was also marked with a farbrengen for the yahrzeit, with the participation of mashpi’im and prominent members of the Kfar Chabad community. Joining on Zoom were R’ Mendel’s wife Mrs. Channa Drizin and other members of the Drizin family.

Addressing the farbrengen were mashpia Rabbi Zalman Gopin, Rabbi Shimon Rabinovich, head of the Kfar Chabad committee, as well as Rabbi Berel Karsik and Rabbi Moshe Adrei who related memories from R’ Mendel’s years as a bochur in Kfar Chabad decades ago.

Inside the Shul, which will also serve as a Beis Medrash for the study of Chassidus, a memorial wall dedicated to R’ Mendel, with a plaque mentioning his illustrious ancestry and his special connection to the spread of Yiddishkeit and Chassidus in Eretz Yisroel during his years there as a bochur.

The plaque also includes a picture of R’ Mendel from the last months of his life last year during his visit to the Kosel.

The new Mayanotecha Shul and Beis Medrash reopened just last month after an extensive renovation in honor of Michael Ben Yitzhak’s bar mitzvah, and the magnificent furniture, library and the “farbrengen rooms” were dedicated by Rabbi Eliyahu Schlossberg in honor of his father Rabbi Avraham Yitzchak Schlossberg.