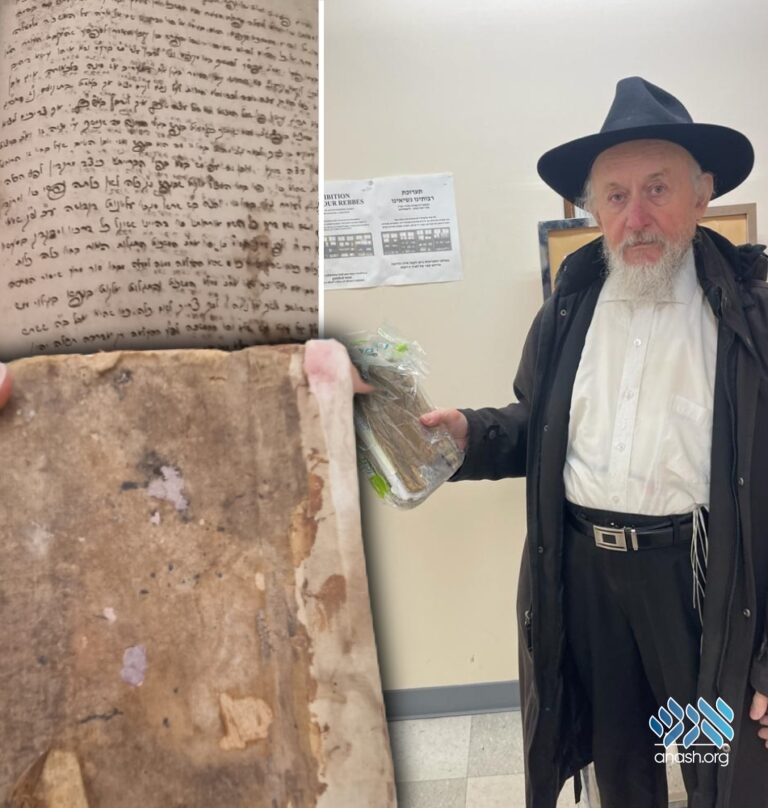 While visiting the Ohel, a group of mekuravim were encouraged to give the Rebbe a gift for Yud Shvat, but a number of them expressed their surprise at the concept. It took only a short time for them to receive their answer.

Knowing of the Rebbe’s desire that all bichelach chassidus – manuscripts of handwritten ma’amarim – be in the Rebbe’s library, one chossid bought one to donate. He had no way to know that the impact of his donation would reach even wider than expected.

Earlier this week, Rabbi Yehuda Pevzner, director of Mitzvah Tank NYC, brought a group of mekurovim to the Rebbe’s Ohel. While there, he farbrenged with them about the upcoming day of Yud Shvat. He encouraged them to give a gift to the Rebbe in honor of the auspicious day, the anniversary of the kabalas hanesius.

Some of the group immediately agreed, and pledged to do mitzvos or increase their Torah study in honor of Yud Shvat. Others, however, had difficulty accepting the concept.

“Do people still give gifts to the Rebbe today?” they asked Rabbi Pevzner. “How is that possible and what does that entail?” they queried.

Rabbi Pevzner continued farbrenging with them, explaining the concept of giving a gift to the Rebbe, and how it is still applicable in today’s day and age.

But it didn’t take long for the questions to receive an even stronger, tangible response.

As the group was farbrenging, a Lubavitcher walked over to Rabbi Pevzner holding a package.

“Are you going to Crown Heights?” he asked.

When he responded in the affirmative, the man asked him if he could deliver the package for him. He explained that it was a bichel, a handwritten manuscript of ma’amarei chassidus, that he had purchased as a gift for the Rebbe in honor of Yud Shvat. With his flight coming up, he wouldn’t have time to personally deliver it, so he wanted to pass it on to Rabbi Pevzner to do so for him.

Hearing the request, Rabbi Pevzner immediately asked if he could show the bichel and tell the story to his group, and the man agreed. The group was shocked to see an answer to their questions show up in front of their eyes, in the form of a chossid giving a gift by fulfilling the Rebbe’s request. They all pledged to also give their own gifts in honor of Yud Shvat.

As promised, Rabbi Pevzner later brought the bichel to the library. The bichel contains ma’amarim from the Tzemach Tzedek and Rebbe Maharash, and surprisingly also contained a letter from Harav Shlomo Zalman of Kopust, the Magen Avos. It contained a number of ma’amarim whose author was unclear, and could be from any one of the Tzemach Tzedek’s sons or grandsons.

The purchaser noted that the handwriting was similar to that of Reb Shmuel Sofer, the famed scribe of Lubavitch. There was a small chance that some of the notations were in the handwriting of the Rebbe Maharash, but it was highly unlikely, he noted.