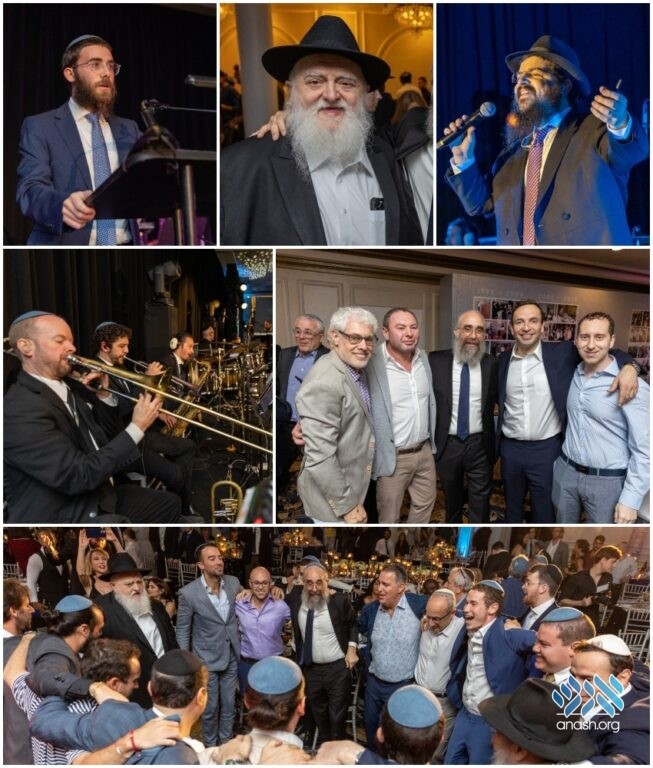 Puerto Rico’s Jewish community celebrated 25 years of Chabad on the Island with an uplifting evening featuring an exceptional performance by Benny Friedman. Rabbi Mendel and Rachel Zarchi reflected on small beginnings and looked to the bright future ahead.

On Yud Tes Kislev, December 13, Puerto Rico’s Jewish community gathered at the iconic Fairmont El San Juan Hotel in Isla Verde to celebrate Chabad of Puerto Rico’s twenty-fifth anniversary. Throughout an evening featuring fine dining, uplifting remarks, and an exceptional performance by Benny Friedman and the Mendy H Band, Chabad’s founders, Rabbi Mendel and Rachel Zarchi, and their community reflected on small beginnings and looked to the bright future ahead.

“Yud Tes Kislev is an auspicious day to celebrate,” Rabbi Zarchi said. “The Alter Rebbe transformed the challenges of Yud Tes Kislev into an impetus for growth, and we, too, had our moments when reality screamed, ‘it can’t be done.’”

It was Erev Sukkot in 1999, and as Benzion Varon recalls, “I didn’t have a synagogue to attend in Puerto Rico.” At a beach-front hotel, Benzion was thinking of Sukkot back in his native Jerusalem when he bumped into a young Rabbi carrying a Torah scroll. “I thought, ‘Dear G-d, I didn’t go to Jerusalem for the holiday, so you sent the holiday to me in Puerto Rico.”

From the day he bumped into Rabbi Mendel Zarchi, Benzion was a regular at Chabad of Puerto Rico. The minyan was small, the synagogue was a hotel conference room, and the little Sukkah sat in a condominium parking lot, but it felt like home.

Rabbi Mendel and Rachel Zarchi came to Puerto Rico in the rainy January of 1999 to launch Chabad of Puerto Rico from their small beach-front condominium. They were determined to give the Caribbean’s largest Jewish community a warm and vibrant home. But at first, determination was all they had.

“We started in a small hole in the wall,” says longtime community member Selwyn Rosen. “I remember we were all scrunched together in the Sukkah because it was all of one parking space.” But with a vibrant core in place, the community grew. In 2000, influential local businessman David Efron provided Chabad with their first permanent center.

With a bit more breathing room, Rabbi and Rebbetzin Zarchi’s programming grew to include a regular minyan, Shabbat meals, Torah classes, a Hebrew school, and a women’s circle. Puerto Rico’s three thousand Jews soon discovered the warm Judaism Chabad offered. The need for a full-size Jewish community center with a synagogue, and especially a Mikvah, became as clear as the tropical skies.

In 2013, Chabad broke ground on a twelve thousand square foot center one block from the ocean. The airy, white building was completed in 2016. Today, it hosts a kosher dining hall, a synagogue, classrooms, and the island’s first Mikvah, among other amenities.

But the tropical skies aren’t always clear. Hurricane Maria wrecked the island’s power grid in 2017 and destroyed an estimated 300,000 homes. After that storm, and again after 2022’s Hurricane Fiona, Chabad bought generators and distributed truckloads of aid to needy neighbors. “Every home was devastated,” Rachel Zarchi says, “we couldn’t stand by when people lost everything.”

Locally based cryptocurrency entrepreneur Brock Pierce was impressed when he saw Chabad’s relief work in action. “These were times of desperate need, life or death,” he said, “Chabad certainly showed up for the local community.”

Twenty-five years and twenty-two hurricanes after landing on the island, Chabad of Puerto Rico sits at the center of a flourishing network of thirteen Chabad centers across the Caribbean. At their “Celebration 25” gala banquet, Chabad celebrated with the vibrant community that made it all possible.

Chabad honored supporters Brock Pierce, Joseph III and Shira Lipsey, as well as Beth and Kutie Shalev, who, like many others, recently found a warm Jewish home on the island. Considering a move to Puerto Rico, Chabad’s large footprint was pivotal in their decision. “When we saw what Rabbi Mendel and Rachel had built here, we said, ‘okay, we can do this,’” Beth said.

Chabad has already purchased a nearby building to host their overflowing youth programming, set to open as the Jewish Youth Center. “It’ll be a base where we will provide core Jewish services for children, youth, and teens,” says Rabbi Levi Zarchi, who recently joined Chabad of Puerto Rico’s development team with his wife, Mushkie.

“In addition to our center in Isla Verda, we’re opening a Jewish Welcome Center in the capital city Old San Juan, where the cruise ships dock,” Levi says. Chabad also operates a center in Dorado, a town known for its pristine beaches and great golf, where they run numerous community services, including a Hebrew school.

At the gala, Rabbi Mendel Zarchi attributed Chabad’s impressive growth to the warmth of the community. “When we began, a daily minyan seemed impossible, and a beautiful center seemed a faraway dream,” he said. “Everything we’ve built together is a testament to the beautiful community here. They’re truly the most outstanding and caring people.”