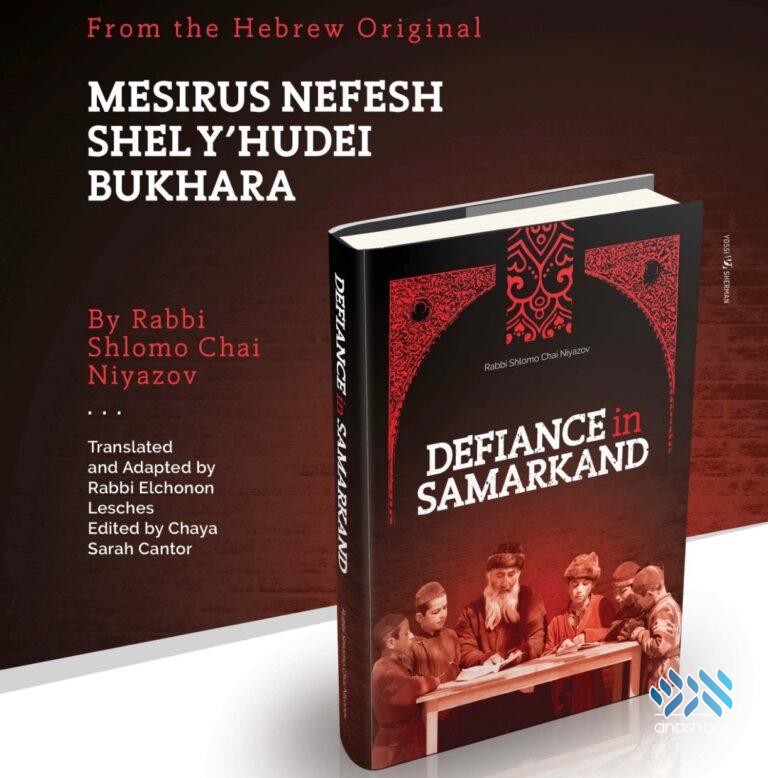 Defiance in Samarkand, a newly translated book by Rabbi Shlomo Chai Niyazov, takes the reader through a journey of a civilization over a millennium old, paying homage to a remarkable corner of the world.

Samarkand was famously a land of refuge during the 20th century for Jews fleeing the Nazi onslaught. But Samarkand was already a land with a long Jewish past, a land steeped in synagogues, rabbis, and scholars.

Defiance in Samarkand takes the reader through a journey of a civilization over a millennium old. From the Silk Road of late antiquity, the Jews of Bukharia spread their presence and influence throughout the Asian region, where they established vibrant communities of commerce and Torah.

Rabbi Shlomo Chai Niyazov, descendant of Bukharian leaders, describes many beloved inhabitants – Kabbalists, artisans, merchants, and tzaddikim – amazing, colorful individuals who raised or reinforced Jewish observance, and who during much of the not-too-distant past fought to preserve their faith in the terrifying face of Soviet oppression.

We meet brilliant rabbis who restored schools and synagogues to spiritual heights; desperate travelers in flight from the Communist regime; and prominent Chabad personalities who survived bitter years in Siberian gulags and Russian prisons. We discover a vast underground network run by Chabad and devoted to the Jewish instruction of local children under the ever-watchful eyes of the KGB. These children became the adults who joined thousands to emigrate to Eretz Yisroel or New York, where, thanks to the tireless efforts of Rabbi Niyazov, they successfully rebuilt their communities.

Gripping yet affectionate, Defiance in Samarkand pays homage to a remarkable corner of the world that proved to be a major center of Jewish life and played a major part in Jewish history.

Rabbi Shlomo Chai Niyazov is rabbi of Congregation L’Maan Achai Bukharim, in Brooklyn, New York. Born in the Soviet Union, he was active during the 1970s in underground outreach, providing religious education and service to thousands of Bukharian Jews. He now lives in Boro Park, Brooklyn, with his wife Sofa, and near his children and grandchildren.