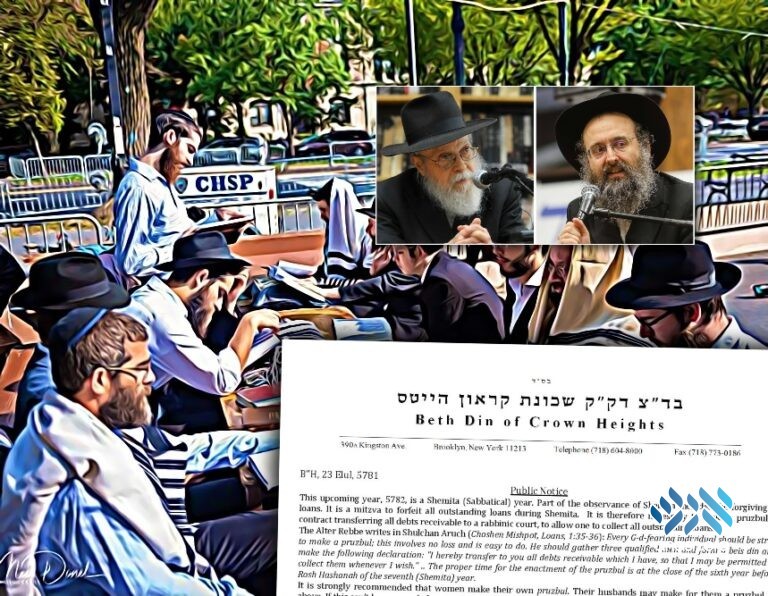 With the upcoming year being a shemitah year, the pruzbul declaration is added to the Erev Rosh Hashana liturgy. Harav Yosef Braun of the Crown Heights Beis Din explains what, how, who and when to do pruzbul. Download the Badatz pruzbal form here as well.

The annulment of all debts in the shemitah year applies also nowadays, rabbinically, both in Eretz Yisrael and in chutz la’aretz. When our Sages saw that people were not lending money when Shemitah approached, thereby transgressing the prohibition of, “Beware, lest there be in your heart an unfaithful thought, saying, ‘The seventh year, the year of release has approached,’ and you will begrudge your needy brother and not give him .  . and it will be a sin to you”, they enacted the pruzbul. In this ceremony, the lender transfers their debts to a Beis Din, by declaring to them before Shemitah, “I hereby transmit my debts to you, so I may collect them whenever I want.” When he says this, it is considered as if he handed over his documents to the Beis Din and asked the Beis Din to collect the debts for him. Therefore his debts do not become annulled with the onset of Shemitah by law.

How is the pruzbul performed? This is done by gathering three men, who serve as a Beis Din, and telling them, “I hereby transmit my debts to you, so I may collect them whenever I want.”

Every G-d-fearing person should be stringent to make a pruzbul, since it involves no expenditure, and is easy to do. The Rebbe adds that nowadays this is applicable to all individuals. Furthermore, from the Alter Rebbe’s words, we can infer that this is the correct mode of conduct.

The annulment of debts applies to women as well [who have their own money]. Some are of the opinion that it also applies to children who have a personal bank account.

The Alter Rebbe rules that the correct time for making the pruzbul is at the end of the sixth year, before Rosh Hashanah of Shemitah. It is a mitzvah to publicize this matter. In order not to forget this important edict, the best time to do the pruzbul is right after Hataras Nedarim, because at that time there are three men present who serve as a Beis Din, and you could then say the phrase for the pruzbul.

If you forgot to make a pruzbul by Hataras Nedarim, it can be done later in the day, up until shki’ah.

If a woman can’t gather three men, nor does she have the ability to make someone else a shaliach for her, a pruzbul document may be written and handed to the Beis Din. The pruzbul form is available from the Badatz and should be filled out and submitted to the Beis Din before Rosh Hashanah. The forms can be placed in the mailbox at the door of the Badatz office: 390a Kingston Ave. (between Crown @Montgomery St.), or faxed to: 718-771-6000. They may also be emailed to: [email protected].

The Rebbe writes that even those who are sure that they have no collectable debts, and thus have no need for a pruzbul, should nonetheless attempt to fulfill this edict. This can be achieved through lending a small sum of money to someone else in order to be able to observe the rabbinical institution of Pruzbul. Writing a Pruzbul is a means to express our affinity to rabbinic rulings. In this case, we use this opportunity as well to express our affinity of following the ruling of the Alter Rebbe to make a Pruzbul at the end of the sixth year of Shemitah.

For the spiritual significance of debt annulment and the connection with Rosh Hashanah, see the sichah of 24 Elul 5725.  On Erev Rosh Hashanah 5726 after Hataras Nedorim and the recital of the pruzbul formula, the Rebbe said, “May you be inscribed and sealed for a good and sweet year,” and then added with a smile, “because we already made a pruzbul here below, there will not be a pruzbul above.”

The source for the annulment of monetary debts during Shemitah throughout golus is by Rabbinic law, so the Sages were able to override its effect with the enactment of pruzbul. However, in the time of the Beis Hamikdash (and therefore in the era of Redemption) we will once again have Shemitah (of all types, including for capital) by Torah decree, and the pruzbul enactment will be nullified. It is disputed among poskim whether a pruzbul instituted on monies lent while still in golus will continue to be effective in the era of Redemption.