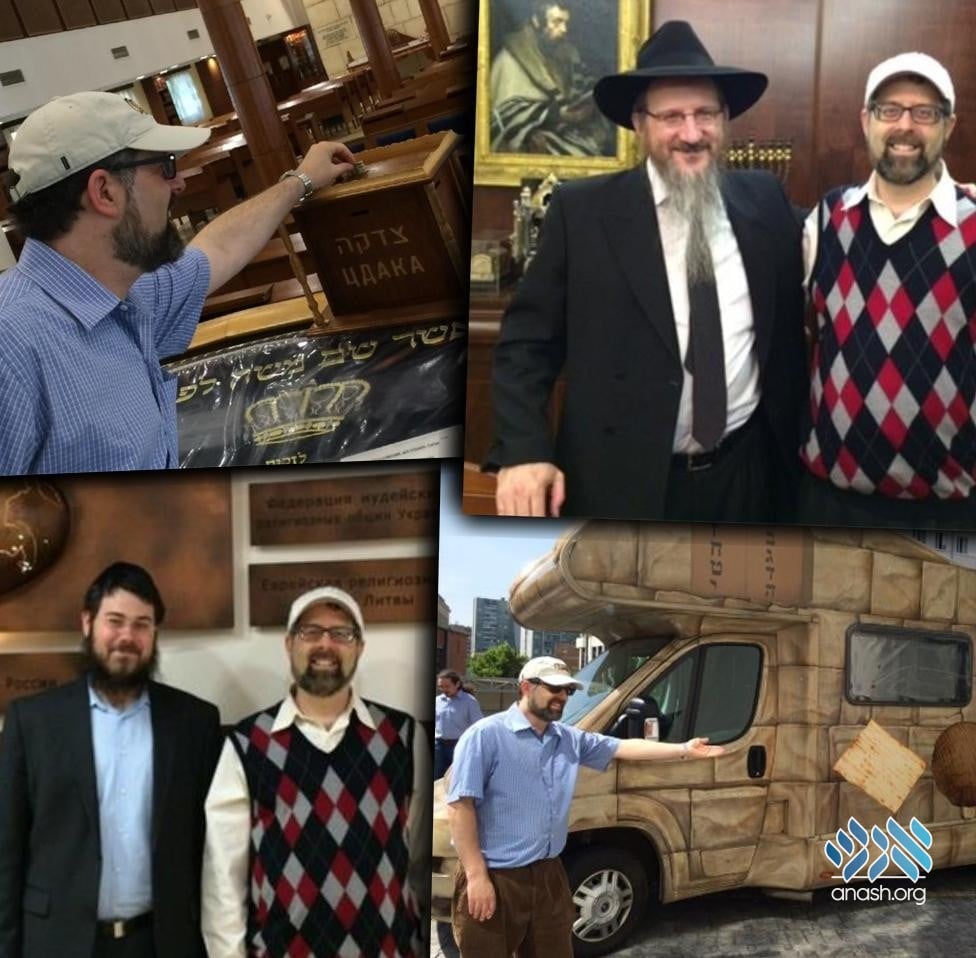 Professor Stephen Shore, who is autistic himself, is a clinical assistant professor and a universally respected authority on autism. He knows that anywhere he travels, he can turn to the local Chabad.

Professor Stephen Shore has an important place at the table—not only in the world of autism but at Shabbat and study tables at Chabad Houses around the world.

Shore, who is autistic himself, is clinical assistant professor at Adelphi University’s Ruth S. Ammon School of Education, and is a universally respected authority on the condition. For a number of years, he has been a frequent visitor at Chabad Houses from Texas to Moscow to Shanghai.

“I travel around the world and am usually in at least one country a month to talk about autism,” he tells Chabad.org. I always try to visit the local Chabad wherever I am.”

Shore does not keep his love for Chabad to himself. While in a city for a conference, he has been known to bring fellow conference attendees to Chabad as well. Shelly Christensen, a disabilities inclusion advocate, author of From Longing to Belonging—A Practical Guide to Including People with Disabilities and Mental Health Conditions in Your Faith Community and a member of the Ruderman Chabad Inclusion Initiative (RCII) core team, first met Shore at an Autism Society of America conference and they kept in touch, presenting together at conferences and often sending each other “Shabbat Shalom” text messages.

“When the Autism Society of America conference was in Milwaukee, we were excited to receive an invitation to come to Shabbos dinner from Rabbi and Rebbetzin Shmotkin of Chabad-Lubavitch of Wisconsin,” reports Christensen, who attended with her colleague and friend. “Sitting at their table, warmed by the glowing candles, we each said a blessing, enjoyed a meal that reminded me of my bubby’s Shabbos dinners, and shared our stories and how Judaism inspired our work.”

Lectures and Presentations Around the World

Shore has taught and given workshops—impromptu and formal—at Chabad Houses around the world. In China, Rabbi Shalom D. Greenberg of the Shanghai Jewish Centers invited Shore to speak about autism. He has delivered more formal presentations on autism at Chabad of West Hempstead, N.Y. and at the Friendship Circle New Jersey in Livingston, N.J.

Closer to home, Shore has delivered Shabbat lectures for Chabad on Campus-Garden City at Adelphi University. With all of his experience both on campus as a professor, and with Chabad worldwide, he was asked four years ago by Rabbi Yankel Lipsker of Chabad at Adelphi to serve as faculty advisor to Chabad. He graciously accepted the offer.

In addition to Shore’s hundreds of conference presentations and articles, he has written three books: Understanding Autism for Dummies (2006), Ask and Tell: Self-Advocacy and Disclosure for People on the Autism Spectrum (2004) and Beyond the Wall: Personal Experiences with Autism and Asperger Syndrome (2003).

Shore, who holds a doctorate in education and a master’s degree in music education, has been known to play “Tumabalaka” on random pianos he discovers in such public places as international airports. “It is one of the songs my parents played as part of the early intervention period.” Shore lost language skills before the age of 4 before starting to get them back. He was deemed “too sick” for outpatient therapy, and his parents were told to institutionalize him. Shore openly shares his personal story at conferences and at Chabad Houses around the world.

Found Chabad on the High Holidays

Shore was introduced to Chabad “about five or six years ago,” when he was commuting between his home and family in Newton, Mass., and the university. “The High Holidays were coming, and I said, ‘Let me see if I can find a shul,” he reports. Shore was warmly welcomed at Chabad of Mineola by Rabbi Anchelle Perl. “They called me for an aliyah, and I kept going.”

He returned to Chabad for Shabbat dinner. “Rabbi Perl invited me for dinner in his home. It was a pretty cool thing.” Shore learned that there were also services on Saturday morning. He was curious, attended one Shabbat and was delighted. “It was worth it. There was Kiddush after davening.” He playfully notes, “I’ll go anywhere with food.”

Shore says, “I learned that if I stuck around a little longer, there was mincha after lunch. That seemed reasonable.” He has been hooked ever since, regularly attending services at the Chabad both Fridays and Saturdays when he’s on Long Island.

“When I realized that Chabad was international and is a big network, I thought, ‘Maybe I can go wherever I am,’ ” exclaims Shore, who began seeking out Chabad Houses and rabbis whenever he was in town for a conference over Shabbat. “I have probably been to more Chabads than anyone I know.”

“It is fascinating to see the variations and similarities,” the professor continues, noting that “wherever Chabad is, when you step over the threshold, you may as well be in Brooklyn.” Shore notes that some services are longer, some are shorter; there is more singing in some places and less singing in others; there are different melodies sung during the services, and the physical setup varies widely. “It can be really small, with services in the rabbi’s house, or it can seat hundreds,” yet there is something that makes them all seem as one, observes Shore.

When Shore is at a Chabad center, he is happy to give back. Once the local Chabad rabbi learns of the professor’s impressive credentials, he is often invited to give a short talk on the spot or a longer one the next day. “I tend to connect my Chabad talk to my life as an autistic person, so I focus on that, and throw in things I will be presenting at the upcoming conference.”

In his discussion, Shore often shares a moving story and video of the Rebbe—Rabbi Menachem M. Schneerson, of righteous memory—speaking on two occasions with the parents of an autistic boy who lived in an institution in England. “I like to talk about these two short video clips of the Rebbe. He seems to intuitively know and use a strength-based approach. He tells the father that the son should have a pushke [charity box] in his room and remind all visitors to put money in the pushke for tzedakah.”

Shore will sometimes go to great lengths to get to a Chabad House. “I was speaking at a conference and hunted down a Chabad House a few miles away,” reports Shore, who chanced upon Rabbi Yitzchok Schmukler and Chabad of the Bay Area in League City, Texas. “I had such a good time that when I was back in Texas and was 90 miles away, I rented a car so I could drive over!”

In Vancouver, Canada, Shore was pleased to find the Chabad-Lubavitch Okanagan in Kelowna, British Columbia, was within walking distance of his hotel. “I called up and came for Shabbat dinner. I got there and found the smallest Chabad I had ever seen. It was just the rabbi—Rabbi Shmuly Hecht, his family and one guest. Despite the small crowd, Shore observes, “I never saw more enthusiastic singing and dancing!” The rabbi intended to walk Shore halfway to his hotel. Before they knew it, they were at the hotel, where Shore reports there was “more dancing.”

The next day, Shore learned that the rabbi had a profound Jewish experience on his way home. Rabbi Hecht spotted a group of college students, potentially drunk, and he was a bit fearful. One person asked him, “Hey, are you Jewish?” The rabbi replied tentatively, “Yes, I am.” A Polish youth from the group explained that he, too, was Jewish, and was having a hard time fitting in. The rabbi, in his traditional Shabbat attire, replied, “Well, do you think I fit in?!” The two connected. The rabbi called Shore to tell him, “Hashem had a reason for me to walk you all the way to the hotel.”

Shore has spent many Shabbats at the Chabad in Moscow, where he was given a tour of the impressive 11-story Chabad building by Rabbi Yaakov Klein, executive director of the International Jewish Community of Moscow. “It is the biggest Chabad I have ever seen,” reports Shore, noting their two restaurants, gyms and study halls. “It is like Chabad meets JCC!” When Klein learned of Shore’s work, he felt Chief Rabbi of Russia Berel Lazar should meet him. Shore was delighted, affirming that “they do a mean Shabbos. The dinner was amazing, and I got to do a good tefillin wrap while in Moscow.”

While his travels have slowed down due to the ongoing coronavirus pandemic, he is eager to get back on the road to share his experience with and knowledge of autism with the world—and, he says, to “nourish his neshamah [soul]” with Chabad in places near and far.