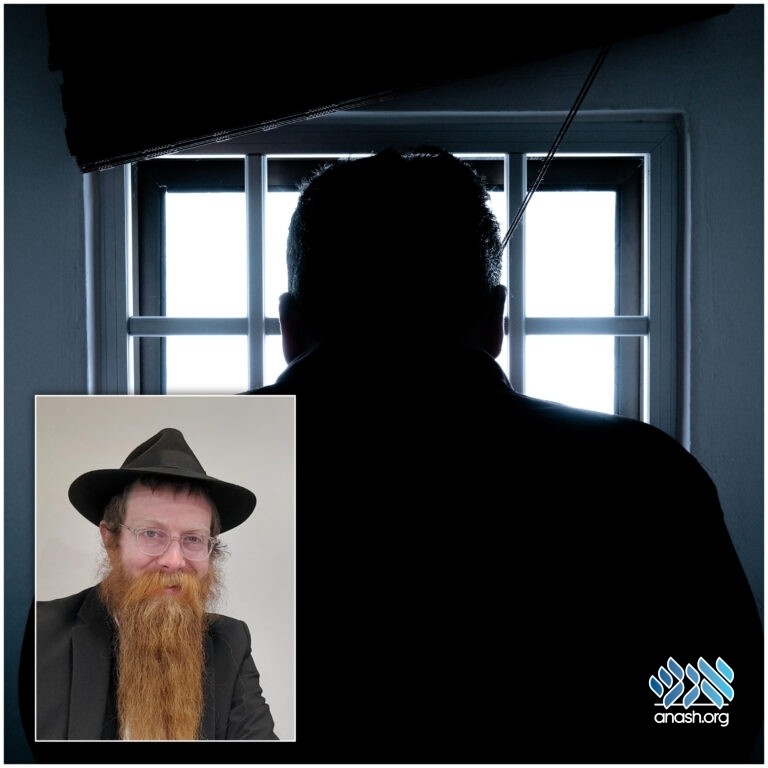 Reuven Overlander met his first life sentence inmate when he was 23 through Aleph Institute’s Summer Visitation Program. Through their relationship and learning, miracles happened.

The first time I entered a prison, I was 23 years old. It was July of 2009, and I was volunteering for Aleph’s Summer Visitation Program together with a good friend. We road-tripped through North Carolina, South Carolina, and Georgia, visiting Jews in various prisons and trying—to whatever extent possible—to bring a little hope and happiness into a very dark place.

Every aspect of prison, from the gray walls to the frigid temperature, seems designed to drain the life out of you, literally. While visiting Wilcox State Prison, I met Jack.*

Jack was a “lifer,” someone serving a double life sentence, with no chance of getting out. He told me, “Every night, I pray to G-d with all my heart that He should just take my soul away. I have nothing to live for, and every morning I wake up devastated that he hasn’t fulfilled my request.”

I had never seen anyone so broken. So bitter. And sadly, so realistic.

I don’t know what compelled me, but I began to tell him the biblical story of Joseph, who was trapped in an Egyptian prison and ended up becoming Pharaoh’s Second-in-Command, all because he opened a meaningful conversation with his non-Jewish “celly.” I explained that although we don’t know why Hashem puts us in a specific place, the fact that we wake up in the morning is proof that there is something meaningful for us to live for. I also said, “G-d is the true Judge and He is the One who writes sentences. Even if according to nature you have no chance of getting out, G-d can make anything happen.”

As I spoke and saw Jack listening deeply, I began to feel nervous. What if I am giving him false hope? But it was too late. I had said what I said. After a few hours, it was time to say goodbye.

The next year, I volunteered for Aleph’s Summer Visitation Program again. Although I was given a different route, a part of me wanted to go back and see how the people I had already met were doing. So I decided to do two cross-country trips, one on a new route and one on last year’s route.

When I walked into the same room at Wilcox, Jack did a double take. “Wait, aren’t you the guy who came last year?” he asked. I told him I had come to see him again. Jack’s eyes filled with tears. “In the ten years that I have been receiving visitors every summer, nobody has ever come back,” he said. “Last year, I told you I wanted to die,” he continued. “But you won’t believe it—I’ve just been granted permission to serve my double life sentence on double-time. That means after 25 years, I will be eligible to see a parole board. For the first time since I got here, there is an end in sight.”

For many years after that, I repeated Jack’s story to countless others in the 250+ prisons I visited. Many other incarcerated men and women were uplifted and heartened by his message of hope.

Fast-forward to 2022. This year, I returned to Wilcox Prison on my route for Aleph’s Summer Visitation Program. I was given a list of all the inmates who would attend the service. I saw Jack’s name but it did not register in my head. When I saw him, my heart sank.

So much for my story, I thought. I repeated it to so many people, yet here we are a decade later and Jack is still stuck in this miserable place.

I recognized Jack, but he did not recognize me. (A lot can change in 13 years.) I was thinking of not mentioning anything but then I thought: His story has helped so many people, I owe it to him to tell him.

So I reminisced about our previous meetings, which he remembered well. I said, “Jack, I just want you to know that your story has inspired countless others. You have made a difference in the lives of strangers you never even met.”

With tears streaming down his face, Jack put on Tefillin and prayed to G-d with all his heart. This time, he was not asking Him to end his life, but to bless him with a new beginning.