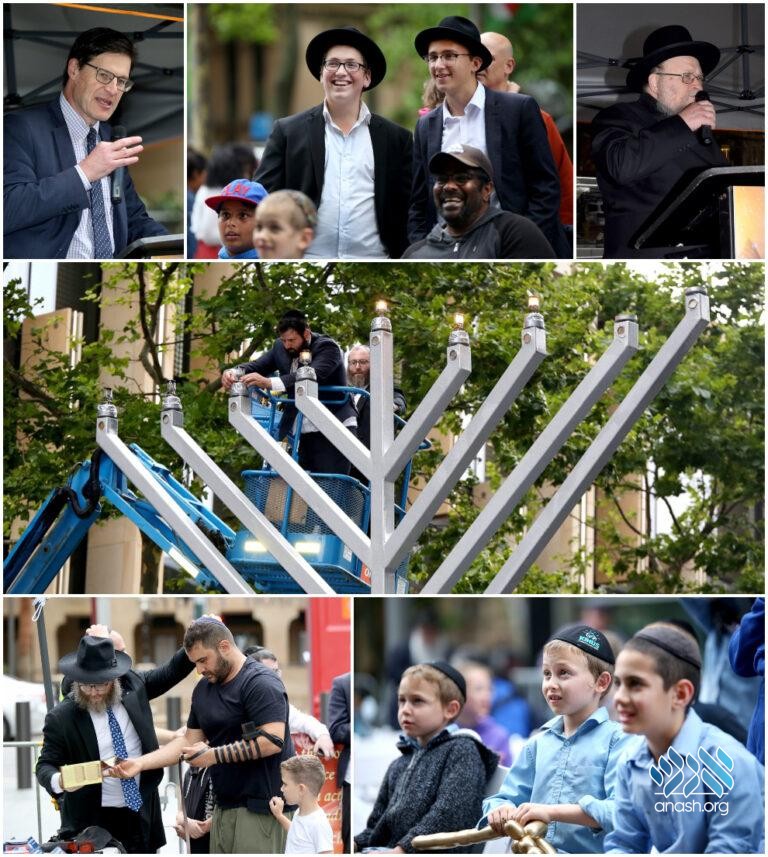 In a public celebration of unity, Chabad Youth NSW and the Sydney Jewish community hosted the Giant-Menorah lighting ceremony, with greetings coming from the Australian Prime Minister, the Head of Opposition, and other dignitaries.

In a public celebration of unity, Chabad Youth NSW and the Sydney Jewish community hosted the Giant-Menorah lighting ceremony to celebrate Chanukah, the Festival of Lights and paid tribute to the victims of the Sydney Siege.

Before the Menorah lighting ceremony, the assembled heard greetings for a number of dignitaries. beginning with Senator Andrew Baragg who also brought greetings on behalf of the Prime Minister, the Hon. Scott Morrison MP and spoke of the great contribution the New South Wales Jewish Community has made for the welfare of the state.

The Hon. Marjorie O’Neil MP shared greetings with the crowd and also brought a special message from Mr. Athony Albanese, leader of federal opposition. Marjorie spoke of Chanukah being a time for healing and rebirth like the rededication of the Temple in Jerusalem.

The Hon. Walt Secord MLC, a regular at the Chanukah event, shared how 32 years prior, he had been a journalist for the Australian Jewish News and the then Premier Nick Greiner went up in the Cherry Picker with Rabbi Feldman OAM to light the Menorah. Walt also shared greetings on behalf of the state leader of opposition the Hon. Jodie McKay MP.

On behalf of Sydney City Council who host the Giant Menorah in Martin Place, Councillor Linda Scott shared warm greetings and her gladness to be part of such a wonderful occasion.

Rabbi Pinchus Feldman OAM, Head Shliach and personal emissary of the Lubavitcher Rebbe to NSW since 1968 spoke about Chanukah and the great miracle we live today – in such an open and helpful society where we are supported in our religion and service of G-d, something the Jewish people have not been able to enjoy for many generations.

Rabbi Elimelech Levy, Director of Chabad Youth NSW was the master of ceremonies and organizer of the event. Rabbi Levy spoke of another lesson we learn from Chanukah, each day we add another light, life is a process and we add step by step just like the kindling of the Menorah in our personal journey of growth.

Due to Covid restrictions, Only 100 people were allowed to join in the seated area and the event had to be fenced off from the public using crowd barriers.

“Chanukah celebrates the rededication of the holy Temple in Jerusalem and overthrow of the tyrants more than 2,000 years ago,” said Rabbi Levy, “It is an occasion for all men and women to demonstrate their support for the peace, unity and the freedom we are so lucky to enjoy in Australia.”

In tribute to the victims and survivors of the Martin Place siege in 2014, that took place only footsteps from where the Giant Menorah is standing, Cantor Yehoshua Niasoff sung the traditional prayer of Oseh Shalom, creating peace in our world.

Around the world, giant Menorahs have been lit up in major public places by government representatives. In Australia, prime ministers, governors-general and premiers – have participated, confirming their policies of tolerance and religious freedom.

Participants at the Martin Place celebration enjoyed live music, amazing entertainment, Jam donuts and gifts galore for all who participated.

Many thanks to all our sponsors and volunteers who helped make this event happen despite the challenges and short turnaround time.