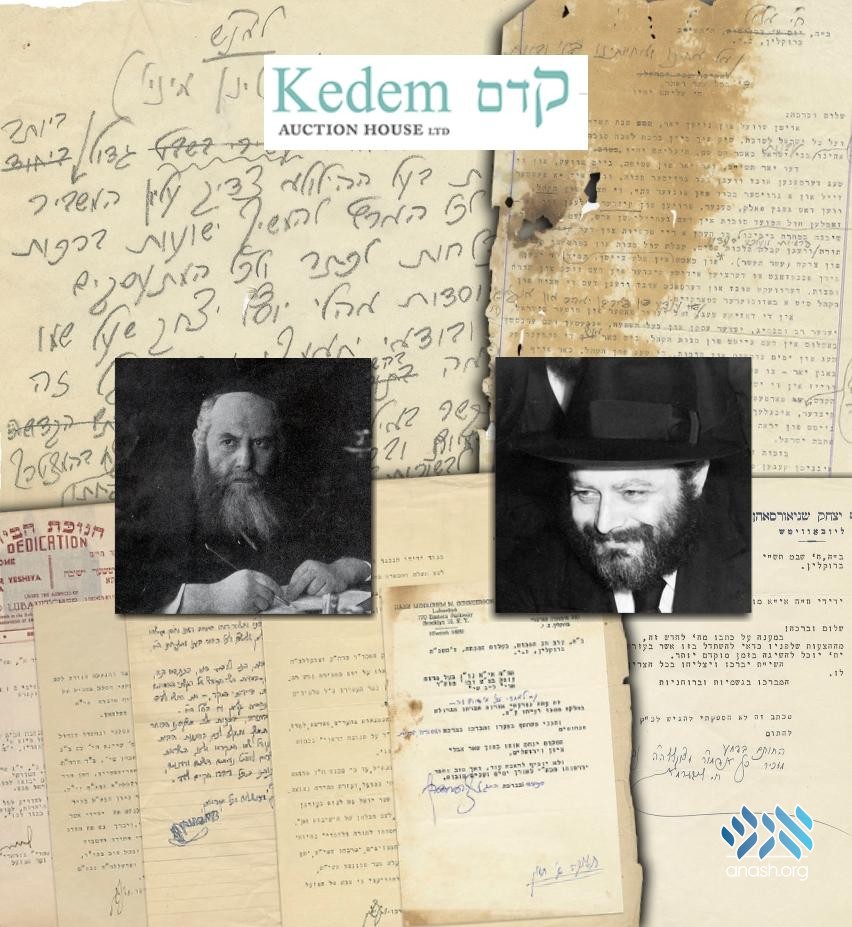 A number of handwritten drafts of letters, edits and historical documents from the Frierdiker Rebbe and Rebbe are being auctioned off by the Kedem Auction House in Yerushalayim, including some with tens of lines of ksav yad.

The recent years have seen an explosion of letters and artifacts from the Rebbe and previous Lubavitcher Rebbeim being sold at public Judaica auctions.

An upcoming auction by the Kedem Auction House in Yerushalayim is no exception. Fourteen lots are filed under the ‘Chabad’ category offering letters, telegraphs or handwritten edits from the Frierdiker Rebbe or the Rebbe, each an unique piece of Chabad history.

The most expensive lot is a collection of nine letters from the Frierdiker Rebbe, addressed to R’ Aryeh Leib Gellman, president of the World Mizrachi Organization.

Two of the letters call to act firmly against the Jewish Agency, which was sending Orthodox Jewish orphans to irreligious kibbutzim. Another letter calls for a general meeting of all Orthodox factions in the United States.

Other letters contain sharp critique of the the activities of the Mizrachi movement during the Holocaust and afterwards, and several letters are lengthy, one spanning seven pages.

Lot 120 contains three typewritten leaves, with over fifty lines handwritten by Frierdiker Rebbe. The draft is of “Der Besht un die Neshama,” the remarkable story of the wondrous birth of Reb Aharon of Karlin, recounted in the name of the Baal Shem Tov. These draft leaves of the story were given to the Frierdiker Rebbe Rayatz for proofreading before it was published in Shmuessen mit Kinder un Yugend. Starting price is $2,000.

An additional seven lots showcase letters and telegrams from the Rebbe. Only one is a letter that was completed and sent, and the other six are drafts of letters or telegrams with the Rebbe’s handwritten edits. The drafts are all from the early years of the Rebbe’s nesius, including one in English, and another fully in the Rebbe’s handwriting. It is unclear where these treasured drafts appeared from, and whose decision it was to sell them on a public format such as the auction.