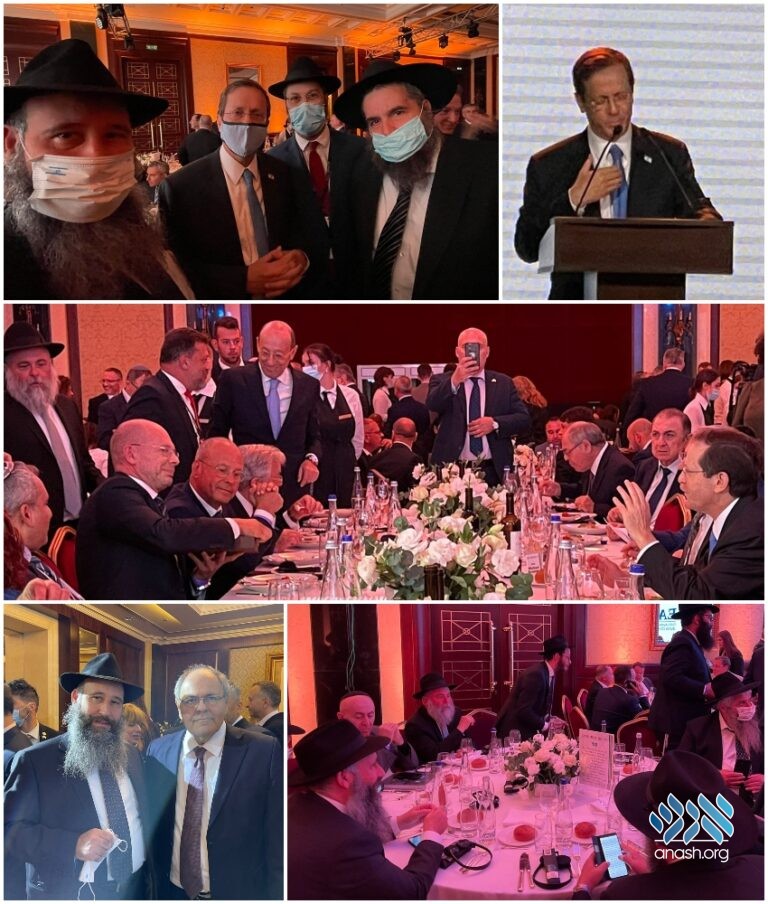 Israel’s President Isaac Herzog traveled to Ukraine to mark the 80th anniversary of the Babi Yar massacre. He was greeted by a delegation on Chabad shluchim, and told them about the special connection he and his father had with the Rebbe.

On a state visit to Ukraine, Israel’s President Isaac Herzog was greeted by local shluchim and recalled the special connection he and his father shared with the Rebbe, and their Simchas Torah visit to 770.

President Herzog made to trip to Ukraine to meet with Ukrainian President Volodymyr Zelensky and to mark the 80th anniversary of the Babi Yar massacre. Nearly 34,000 Jews were killed within 48 hours in Babi Yar, a ravine in the Ukrainian capital when Kyiv was under Nazi occupation in 1941. SS troops carried out the massacre with local collaborators.

Mr. Herzog was welcomed to Ukraine by a delegation on Chabad shluchim during a reception organized by the JNF Ukraine.

Becoming emotional, Herzog told Rabbi Markowitz of the special connection he had with the Rebbe, and of the unforgettable moment when he and his father, then Israeli Ambassador to the United Nations, celebrated the Simchat Torah holiday with the Rebbe.

“I was at the Rebbe for Simchat Torah,” Herzog said. “I will never forget that life-changing moment. I remember that he brought me his Torah scroll to hold, and he even blessed me emotionally at that event.”

“It was very moving. Until today, that moment accompanies me, especially when I see the amazing activities of Chabad around the world, and especially in Kiev and Ukraine, where we are now.”

The event was also attended by a delegation from Israel, including the Ambassador of Israel to Ukraine Michael Brodsky, Minister of Construction Zeev Elkin, Chairman of the Holocaust Memorial Center in Baby Yar Natan Sharansky, acting Chairman of the Jewish Agency Yaakov Hagoel, and Chairman of Yad Vashem Dani Dayan.

“I was glad to meet representatives of the wonderful Jewish community of Ukraine and celebrate the creation of the Ukrainian branch of the Jewish National Fund,” wrote President Hertzog on his Twitter page.