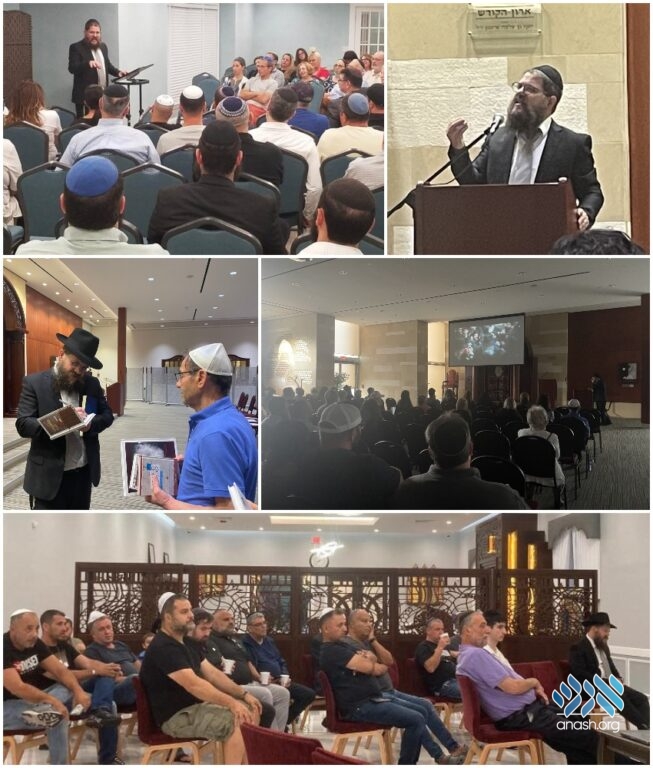 Israeli communities in New Jersey, Illinois, and Toronto, marked the Rebbe’s Yahrtzeit with a special guest speaker. Rabbi Shneor Ashkenazi visited five communities to teach and inspire Hebrew speaking communities outside Israel about the Rebbe and his vision.

The first such tour since the outbreak of Covid, the Chabad-speaking tour geared towards the Israeli community, was brought to America and made possible through the collaboration of multiple Shluchim in conjunction with the Hebrew Desk at Merkos 302.

Rabbi of the central synagogue in Rishon LeZion, Israel, Ashkenazi is a highly acclaimed author and speaker, popular in the religious and secular Israeli communities in Israel and around the world. His weekly classes attract a broad audience, racking up tens of thousands of views on YouTube and other platforms. Many Shluchim make use of the Shiurim and speeches that Rabbi Ashkenazi prepares.

“The unique power of Achdus, Shluchim collaborating is on display here,” said Rabbi Mendy Kotlarsky, Executive Director of Merkos 302. “Bringing a speaker of this caliber to America would be unfeasible for a Shliach on his own. The Hebrew Desk has created a tight-nit network of Shluchim with common goals, paving the way for greater collective success.”

The week-long tour was arranged and subsidized by the recently established Hebrew Desk at Merkos 302. Beginning in Philadelphia, Rabbi Ashkenazi continued to visit Chicago, Illinois, and Lakewood, New Jersey, ending with an uplifting Shabbos Gimmel Tammuz in Toronto, Canada. The Hebrew Desk handled all logistics, such as travel and scheduling, ensuring a seamless and stress-free experience for Shluchim.

“It is incredibly moving to witness such tremendous growth and expansion amongst the Rebbe’s Shluchim,” commented Rabbi Ashkenazi to organizers. “Each location I have visited has experienced tremendous growth in the past several years, despite the pandemic. The activities of the Shluchim to Israeli communities are breaking boundaries on every front.”

Despite the unprecedented challenges of the past two years, Shluchim strived to make the most of the unique situations. Many, including those serving Israeli communities, have seen their efforts blossom as the world emerges from the pandemic.

“This is the first of many speaking tours we have planned for Israeli communities around the world,” explained Rabbi Shimon Binstock, Director of the Hebrew Desk. “Shluchim have already seen the direct fruits of a cohesive network of Shluchim focused on a singular demographic.”

One of the hachlatos of the Kinus HaShluchim 5782, the Hebrew Desk at Merkos 302, has created a network of Shluchim that work with the Israeli communities outside of Israel. In addition to coordinating group events between Shluchim, the desk works to translate programs such as CTeen, CKids, and others into Hebrew, branded for the Israeli crowd living outside of Israel.