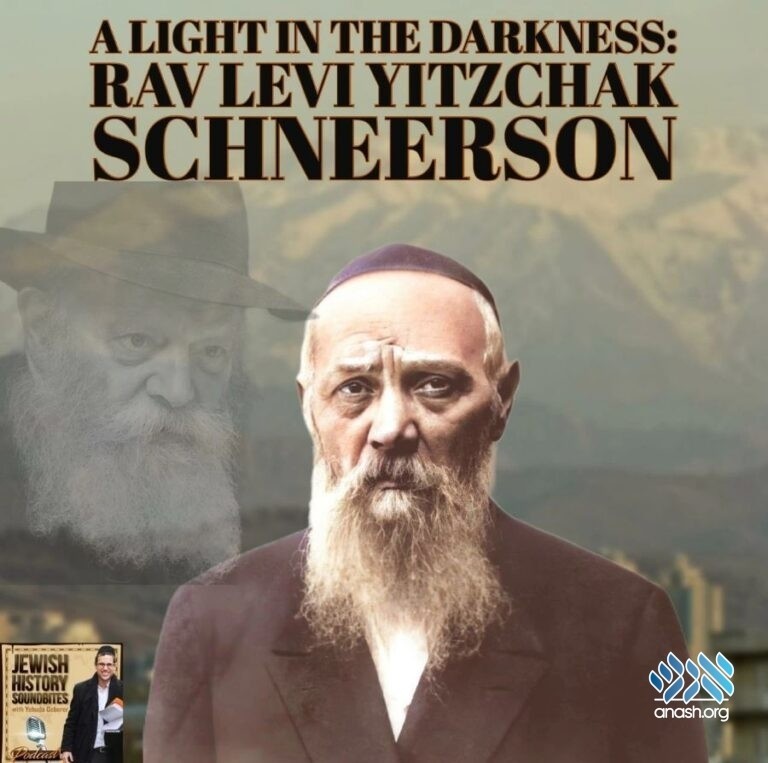 In honor of Chof Av, yahrtzeit of the Rebbe’s father, Harav Levi Yitzchok, popular historian Yehuda Geberer of Jewish History Soundbites released a podcast about his life and impact.

In honor of Chof Av, yahrtzeit of the Rebbe’s father, Harav Levi Yitzchok, popular historian Yehuda Geberer of Jewish History Soundbites released a podcast about his life and impact.

Here is what they wrote:

Rav Levi Yitzchak Schneerson (1878-1944), father of the Lubavitcher Rebbe Rav Menachem Mendel Schneerson, served as rabbi in Yekaterinoslav in the Soviet Union. As he valiantly attempted to maintain traditional Jewish life under increasingly challenging conditions under the communist regime, he succeeded in opening a mikva, baking matzos, answered halachic queries, collected charity and distributed it to the needy, kept the shul open for services and celebrated the Jewish holidays with his community.

These illegal and anti-Soviet activities eventually led to his arrest and interrogation at the hands of the NKVD in 1939. They didn’t succeed in breaking him during lengthy interrogations, and the transcripts of the NKVD on his file serve as an invaluable resource to understanding the narrative of his arrest and eventual exile. Sentenced to five years of exile in far away Chili, Kazakhstan, he was soon joined by his wife Rebbetzin Chana, who cared for him as his health deteriorated and they often faced starvation during their long years of isolation. Her memoirs provide another invaluable window into the tribulations which they sustained during this challenging time. He passed away on 20 Av, 1944 in Almaty, Kazakhstan.

For sponsorship opportunities about your favorite topics of Jewish history contact Yehuda at:  [email protected]

You can email Yehuda at [email protected]