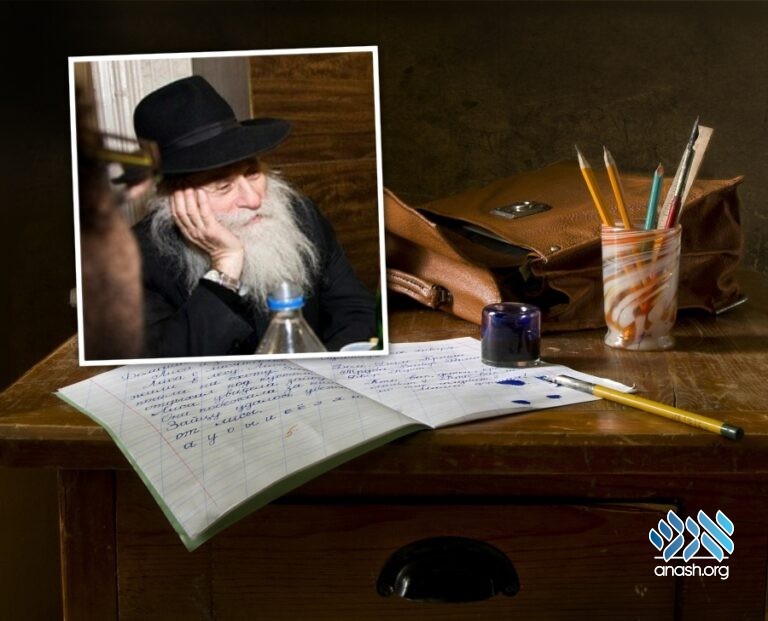 This poem, written by Mrs. Korf, first appeared in Di Yiddishe Heim of Winter 5733 (no. 54). Like the rest of Di Yiddishe Heim, the poem was edited by the Rebbe. It was recently republished in a teshura for the Korf-Mochkin wedding.

May we offer these lines as a tribute untold
To a “class” we hold high in esteem
To the “shouted at” husbands who their time must devote
Only for others – it seems.

It’s to those who come from shul latest
On Shabbosim and such
To the bewailment of children and spouse,
And the one who, should it happen,
Does comes but once on time,
It’s because he’s brought dozens to join him at the house.

He had Kvius at daybreak, and two more at dusk,
One in Yiddish, the other in English – the third might even be in Greek;
One with a chosid, the second a doctor – the third – might still be a freak.

Yet he goes forth undaunted – as in stories of old,
Determination encoupled with charm.
He lives with his chitas, his sichah of the Rebbe
And his Tefillin tucked under his arm.

His pennies are counted
With nothing to spare
Except for the loan to repay
But for an orach on Shabbos,
A student from “far” (and mashke);
For this he always has – so they say.

His clothes are most ancient,
His hat an antique
That has weathered many a storm (usually from his wife, of course)
But his life’s interest lies elsewhere;
This is of small concern –
There’s chassidic living in the world to enforce!

He knows not of mealtimes,
Food’s not his concern,
His wife’s efforts he brushes aside.
Yet when there’s “economical pressure” and life is so trying,
He feeds us stories of bitachon and pride.

He has stories in the hundreds – of when he was young –
And of chassidic “giants” he was privileged to see;
They are his tools with his students,
His way with his friends,
To all problems – his remedy.

Ishto Zu Baiso – His wife is his home –
Is a saying which begs interpretation,
But how it means 770, with his body and soul,
Is beyond my means of explanation.

And if the Rebbe Shlite should think he’s the one
For a special shlichus that has to be done…
There is nothing more taier,
The world turns afire;
His body trembles and shakes
Lest he make some mistake –
For this is his life and desire
And for him there is nothing higher.

I ponder with a bit of a laugh
At what a “chosid” must think of his “other half.”
Our attitude often makes him annoyed;
Why shouldn’t his ways by his wife be enjoyed?
Was it not a condition of creation
To help him when needed
Whatever the necessity – to make sure he succeeded!

But hearken – chosid – you’ve got it all wrong
With our chassidic husbands we stand staunch and strong
And we women have witnessed a many a bout
As to whose husband – was most devout!

In a world full of empty and superficial values
We are quick to discern what is pure
And although “discomforts” are many to our womanly pleasures
That which comes with effort-endures.

You are the pride of our family
Although we really must say
We seem to repel some of your elevated quota.
Deep in our hearts is our most fervent wish –
Please, chosid, don’t change – not even one iota.

Take us along on your ladder
On which you climb to all heights
And teach us, with patience, your ways,
For will we not bring up your children
To follow in your footsteps
And bring Moshiach speedily in our days!