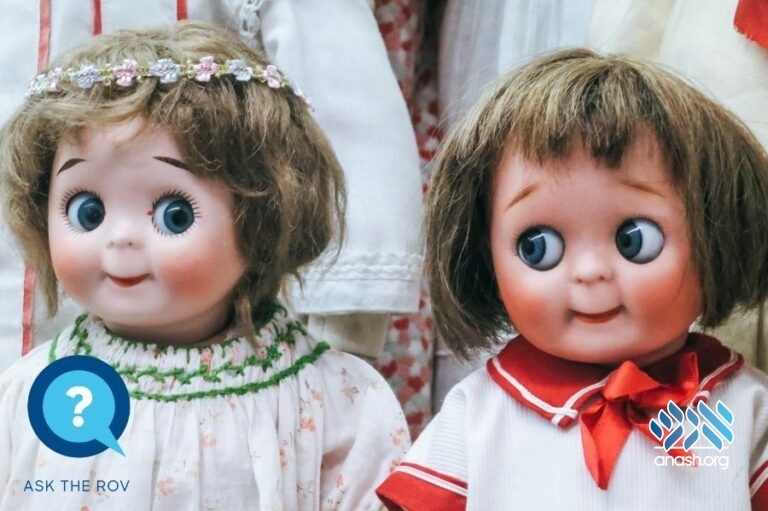 Ask the Rov: Does the prohibition of human sculptures apply to play dolls?

When the Torah discusses the prohibition of graven images, the posuk says, “lo sa’asun iti (אִתִּי) – Do not make with Me,” which Chazal expound to read with alternative nekudos as “lo sa’asun osi (אֹתִי) – Do not make Me.” This refers to forming a 3-dimensional form of a human, since that is the form in which Hashem appeared to the nevi’im.1

Aside from the Torah prohibition to form such an image or sculpture, miderabanan one may not keep such an image that was formed by others, since people might think that he made it.

If part of the human form is missing — e.g. it doesn’t have a nose or an ear — it is allowed. Some hold that it suffices to chip the nose or ear, while others require an entire limb to be removed.2 This should be done to porcelain figurines and the like. A head without a body is subject to debate amongst poskim, and one should refrain from creating it, but one may keep an already made one.3

What about hard play dolls?

Many poskim are lenient based on multiple reasons, including: (1) Idol worship is not popular nowadays and he won’t be suspected of having an idol, (2) contemporary play dolls are clearly not idols and are never worshiped by anyone;4 and (3) the prohibition only applies to images that are treated with respect, not dolls that are played with.5

Others argue that it presents an issue since we don’t have the authority to change Chazal’s decrees even when circumstances have changed.6 Some hold that even according to the lenient view, if the doll’s leg or arm falls out, one should not reconnect it, since “making” a form is a questionable issur d’oraisa.7

In practice, the custom is to be lenient in owning such dolls, but not with making them. Yet, it’s preferable to deform the doll by removing a tiny bit from the nose in a way that the child won’t even notice.8 Cloth dolls do not pose any concern since they don’t have a humanlike figure. (A hard head with a cloth body would like a head alone which one may be lenient to keep.)