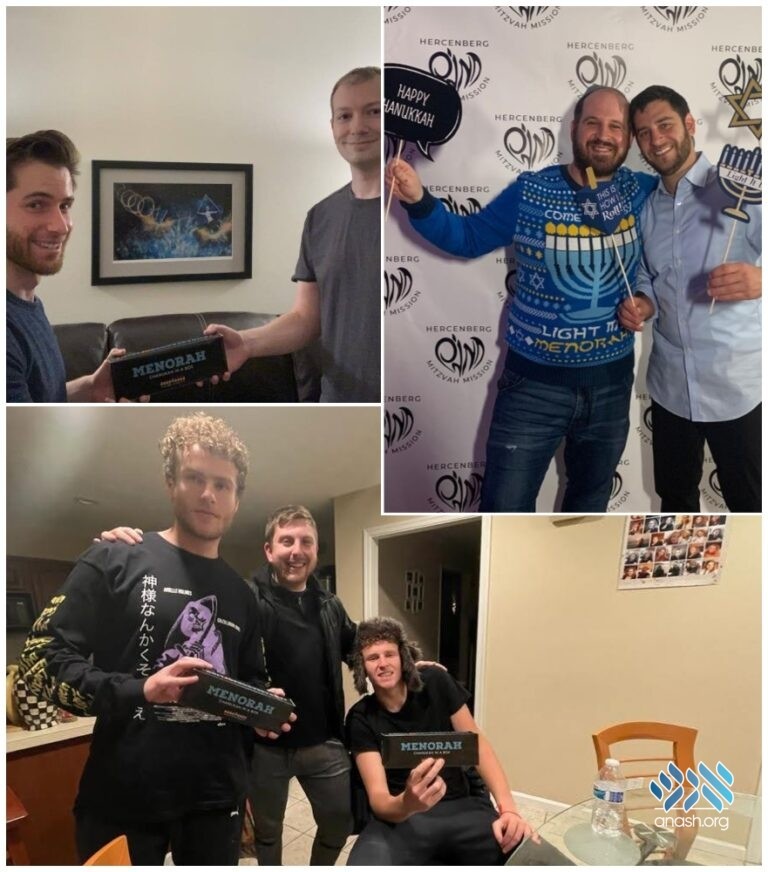 As a young professional in Manhattan, Yudi Hercenberg pioneered CYP’S Ambassadors of Light Initiative. Now, he’s bringing the popular program to all Chabad houses across the globe by gifting 40k Menorahs to Chabad Houses Worldwide.

Yudi Hercenberg was eight years old when he taught his uncle about Kosher and discovered the addictive power of sharing Judaism. Still, it was years before he discovered Chabad. By then, he had graduated from Fairleigh Dickinson University in New Jersey with a BA and was entering a promising career. While working in finance in Manhattan in the early 2010s, he found himself at home at Rabbi Yaya and Devorah Wilhelm’s Chabad Young Professionals of the Upper East Side.

The Wilhelms’ ability to ignite young Jews’ passion for Judaism was inspiring, but Yudi saw the potential for even greater growth. “There’s only so much a Rabbi can do,” he says, “I felt very strongly we had to empower laymen to be Jewish leaders as well.” In 2012, Yudi and Rabbi Wilhelm launched Ambassadors of Light. Their program empowered young Jewish professionals to share Chanukah menorahs with colleagues, family, and friends who may not have one.

After an inspiring launch event, Yudi and other young professionals headed to their offices, and sometimes the streets of Manhattan, with cases of menorahs. “I’d sometimes spend five or six hours delivering menorahs all around Manhattan,” Yudi remembers. “Receiving one for no reason other than the fact that they are Jewish was unbelievably inspiring for people.”

Yudi and Rabbi Yaya’s campaign caught fire, and Rabbi Wilhelm saw it ignite sparks in his community’s eyes. “Being entrusted with the mission of shlichus is the greatest gift of our lives,” he says. “Our community wants to feel that joy and purpose as well.” Chabad Young Professionals International soon adopted Ambassadors of Light. They brought the program to every node of the global Chabad Young Professionals network for Chanukah 2013, even producing custom menorahs emblazoned with Ambassadors of Light branding.

Working with Rabbi Wilhelm in Manhattan and later with Rabbi Shuey Biston in Parkland, Florida, Yudi expanded the Mitzvah Ambassadors program to include mivtzah mezuzah (Ambassadors of Protection) and mivtzah matzah (Ambassadors of Freedom). “When we handed people menorahs or matzahs to share with others, they felt apart of something greater than themselves,” Rabbi Biston says, “They were doing their part in passing on the long chain of Jewish tradition.”

Reflecting on the rapid growth of the Mitzvah Ambassadors program, Chabad Young Professional’s director Rabbi Beryl Frankl says growing numbers of young Jews are eager to make a real impact on behalf of the Jewish community. “We’re seeing many young people reach beyond their comfort zones to share a Mitzvah with a friend or colleague,” he says, “it’s beautiful to see them share their passion.”

Yudi Hercenberg now resides in Parkland, Florida, with his wife Simcha and sixteen-month-old Abe. As Chanukah 2022 approaches, Yudi decided to bring Mitzvah Ambassadors to the big leagues. A new grant from the Hercenberg Mitzvah Mission foundation makes any Shliach eligible to receive cases of menorahs and support for launch programming. The program is now available to Shluchim serving all ages and demographics.

“Shluchim often share that nothing compares to the power of passing the mission of Shlichus on to their community members,” says Rabbi Mendy Kotlarsky, director of CYP International’s umbrella organization Merkos 302. “The Ambassadors of Light program empowers every Jew to pass the torch of Judaism, and the miracle of Chanukah, on to another.”

Yudi hopes the grant will help the already record-setting Ambassadors of Light program fire-up passionate young Jewish adults around the world and bring the celebration of Chanukah to thousands more. “If a Rabbi approaches you to do a mitzvah, you might think ‘that’s his job,’” Yudi says, “but if your best friend approaches you, it’s because he’s passionate about it.”

To bring Ambassadors of Light to your Chabad house, visit: https://www.chabadyoung.com/ambassadors