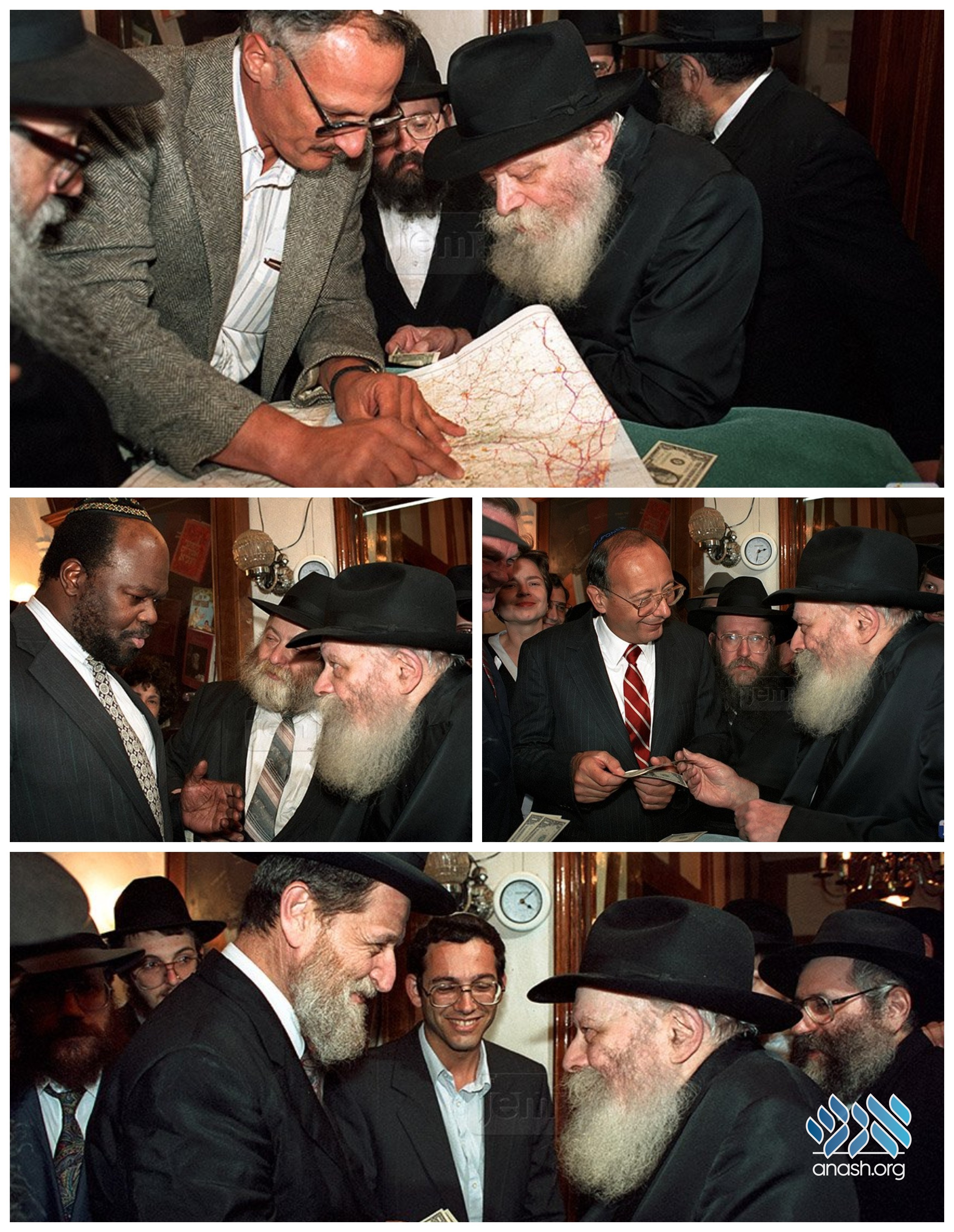 On Sunday, 22 Elul 5751 – 1991, thousands came by the Rebbe for Dollars including a US Senator, a New York Attorney General, members of Congress of Racial Equality, and a settlement leader.

Each time the Rebbe distributed dollars, individuals were touched and lives were impacted. JEM Presents photos of several highlights and encounters from Sunday Dollars of 22 Elul 1991 (5751).

From the spring of 1986 on, every Sunday, the Rebbe would stand and distribute dollars, to be given to charity, to anyone who came by his door. Thousands stood in line each week, and to every person he received, the Rebbe offered a blessing, some encouragement, or a word of advice.

The Sunday of 22 Elul 1991 was no different. The Rebbe saw countless people from all walks of life and had time for them all – including a US Senator, a New York Attorney General, members of Congress of Racial Equality, and a settlement leader, among others.

Click here for the full collection of photos from that day.

US Senator Alfonse D’Amato visits the Rebbe shortly after the Crown Heights riots: “Much success in all your endeavors for the peace and security of all the people of the United States. ‘Amato’ means ‘love’ in Italian. Proceed in your work with inner love, and the entire population of New York will respond to you and your colleagues with true love as well.”
Watch Video

Mr. Naftali Krauss brings the Rebbe a copy of his translation of the Abridged Code of Jewish Law to Hungarian. The Rebbe thanks him and points out that Moses showed the way by translating the Torah into seventy languages!
Watch Video

Mr. Roy Innis of the Congress of Racial Equality visits the Rebbe:
“The Jewish and Black communities have both suffered great persecution in history. From now on, may every one of us, and all the population of the United States, have only good news and healthy news, in all matters of goodness and kindness.”
Watch Video

Chief Rabbi of Haifa, Israel, Rabbi She’ar Yashuv Cohen visit: The Rebbe discusses the laws of the Priestly Blessing with him and ends with wishes for the whole Jewish nation to ascend to the Holy City of Jerusalem, speedily.