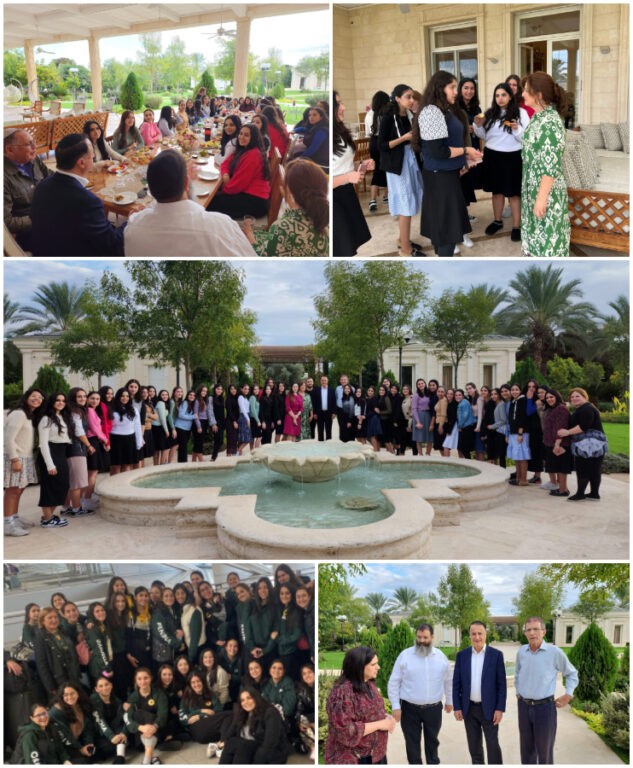 Ohr Chana High School for girls embarked on a trip to Eretz Yisroel and began their trip at the Savyon home of philanthropist Lev Leviev, their school’s patron.

Ohr Chana High School for girls embarked on a trip to Eretz Yisroel and began their trip at the Savyon home of philanthropist Lev Leviev, their school’s patron. The school was named for Mrs. Chana Leviev, mother of Levi Leviev, who was known for her steadfast observance of Judaism throughout the most challenging times of Soviet Russia alongside her husband, Reb Avner Leviev.

Mr. Levi and his wife Olga warmly hosted the students and were gratified to hear about their scholastic achievements. The students thanked the Levievs for establishing the school which allowed them to thrive in a wonderful Jewish atmosphere, under the leadership of the Rebbe’s Shluchim in Queens, Rabbi Zalman Zvulonov, Rabbi Levi Yitzchak Wolowik, and Rabbi Shmuel Kogan.

The director of Ohr Avner in Israel, Rabbi Yehudah Blau, attended the gathering along with Mr. Rafi Banai, director of Chaya”l. They were both genuinely impressed by the high-quality education and character traits exhibited by the students.

Every student received a beautiful, white leather-bound Sefer Tehillim as a memento from the “kinnus hakhel” in the Leviev home, as well as the Leviev’s warm blessings to each student – for a successful future in their role as Jewish women.