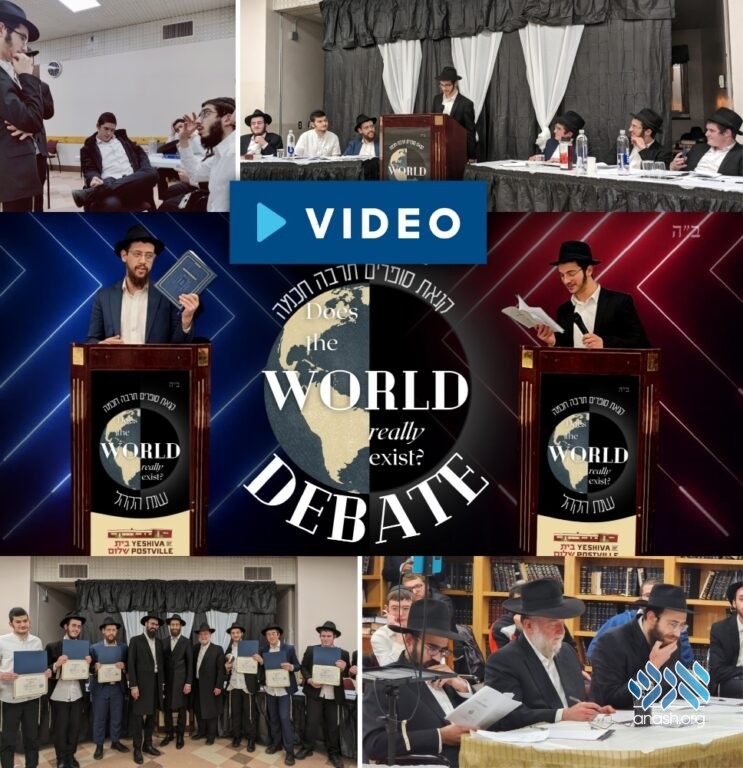 An offhand farbrengen during a Shabbos farbrengen at the Postville Yeshiva quickly developed into a passionate debate, which snowballed into a full debate-club-style duel between two groups of bochurim.

An offhand farbrengen during a Shabbos farbrengen at the Postville Yeshiva quickly developed into a passionate debate, which snowballed into a full debate-club-style duel between two groups of bochurim.

It all began on a Friday, a number of weeks ago. A few moments before Shabbos a simple sign was hung on the bulletin board of Yeshiva Bais Shalom of Postville, stating that maggid shiur Rabbi Mendy Karp will be farbenging after the Shabbos seudah in the dining hall.

After the seudah a group of bachurim gathered for the farbrengen, farbeisen was put out, niggunim were sung and l’chaim was said.

“I was speaking with someone who toured a place where they produce films,” Rabbi Karp began. “This individual told me that those in that industry say they have no problem fooling people. They say it’s fine ‘because you believe it'”.

“This is much like this world, we’re all ‘living in a movie’, stuck in this fake world,” Rabbi Karp continued. “If we would just look away, and focus on true reality we would be able to see through the trickery, and see the true reality.”

Hearing this, one of the talmidim hashluchim at the farbrengen took immediate issue “How could that be? Does Hashem want a dirah betachtonim in a fake reality? Hashem kivayochel just wants to win a video game?”

A heated argument ensued between all present, and it quickly became clear that more thought and research were needed. Soon an idea was proposed that a debate should be held on the topic. And indeed, soon after Shabbos, the details were decided and sign-up sheets for each team were put up. The debate would be in two weeks.

The bochurim quickly got to work, asking anyone they could find for sources and arguments, preparing tens of sources from all across Nigleh and Chassidus.

“It was amazing to see the bochurim koching in the topic both in and out of seder,” said maggid shiur Rabbi Levi Ceitlin, who was appointed to be one of the debate judges.

Questions like “which side are you on?” or “whose going to win”, became as common as “what’s for lunch” in the yeshiva over those two weeks. The topic of discussion in yeshiva was focused inyonim of Torah.

As the day approached, both teams pulled out all the stops, calling people from across the country for sources, writing up speeches, and ultimately submitting over 30 mekoros which were swiftly assembled into a kuntres for all the judges, viewers, and debaters.

Hakhel! As the night of the debate came, the anticipation was palpable, both sides put their finishing touches on their arguments, and the whole yeshiva, as well as community members, gathered to watch.

L’maan yisheu, ul’maan yilmidu! – The debate began with both teams presenting their side, followed by rebuttals, with both teams quoting sources and responding to the other team’s arguments.

“I was very impressed, especially with the bekius. Mekoros were flying, from rishonim, acharonim, sifrei chassidus and more,” said Rabbi Shmuel Benshimon, Rosh Yeshiva of the Postville Yeshiva Gedola, who was also a judge.

Rabbi Benshimon and Rabbi Ceitlin were joined by Rabbi Chaim Abrahams, a senior member of the Postville community, and former member of Va’ad LeHafatzos Sichos, who was in years past responsible for publishing synopses of the Rebbe’s farbrengens, thereby allowing chassidim across the world to read what the Rebbe spoke about soon after each Shabbos.

After the debate concluded, the judges announced the winning team. The winners received trophies and both teams received gift certificates for sefarim, in appreciation for their hard work.

Late into the night and for days after the debate, the topic was discussed in yeshiva, many spending time outside of seder to learn the kuntres of mekoros, and eager to join the next debate.

The topic even reached the local cheder where the young students were heard discussing the question. Truly ha’anashim, hanashim, v’hataf!

The debate was organized by the Talmudei Hashluchim and sponsored by generous donors. To help cover costs of future debates and other engaging programs please consider donating to the Postville Shluchim Fund at: https://cash.app/$PostvilleShluchim83

To reach out for more info/sponsorship opportunities, or to bring this to your yeshiva, please contact [email protected], or (563) 275-6724 (Call/Text/WhatsApp).